Last season will be remembered for the historic rise of Leicester City as they defied the odds to finish the season as champions for the first time in their history. All season long they proved people wrong as the footballing world waited patiently for their form to regress to the mean. Instead they held off all their challengers for the entire campaign.

This season though is in danger of being remembered for a historic fall off in form from the previous champions as with more than half the campaign gone Leicester are flirting with relegation from the Premier League.

When you are in poor form one of the worst fixtures in the domestic campaign to face is a clash with the perennial powerhouse Manchester United, even if the game is going to be played at the King Power Stadium and not at Old Trafford.

In recent weeks Manchester United have shown glimpses of their form of old as Jose Mourinho finally appears to have got to grips with the squad at his disposal. Defensive solidity combined with the trademark ruthless touch in front of goal has again made Manchester United a terrible proposition for their opponents.

That said there has been a stutter in form of late for the side from Manchester with draws in the league against Liverpool and Stoke City before a defeat – but victory on aggregate – in the second leg of the EFL Cup semi-final to Hull City. This relatively poor form simply made it more likely that Leicester were going to face a fully focussed United side in this match.

Manchester United chose to start the match by mirroring the 4-4-2 defensive shape that served Leicester City so well last season. They started with David De Gea in goal behind a back four of Antonio Valencia, Eric Bailly, Chris Smalling and Marcos Rojo.

In the attack Marcus Rashford was chosen as the foil to Zlatan Ibrahimovic.

Leicester City have retained their faith in the 4-4-2 despite the threat of relegation. In goal we saw the son of United legend Peter Schmeichel Kasper in goal. Fuchs, Huth, Morgan and Simpson form a settled defensive line with Drinkwater and Ndidi being flanked by Mahrez and Musa. In attack we again saw Claudio Ranieri settle for a combination of Okazaki and Vardy.

When Leicester won the league in the 2015/16 season they did so on the back of the goals of Jamie Vardy and the defensive solidity of their first choice back line, Danny Simpson, Wes Morgan, Robert Huth and Christian Fuchs.

The four defensive players created a system that appeared much stronger than the sum of its parts and were rarely troubled by even the most well-known attacking players in the league. Fast forward a year however and that back four and defensive structure is almost unrecognisable from what we saw a year ago.

In this match Manchester United were able to find spaces throughout the field as the Leicester defence left large areas of the pitch for United to exploit. 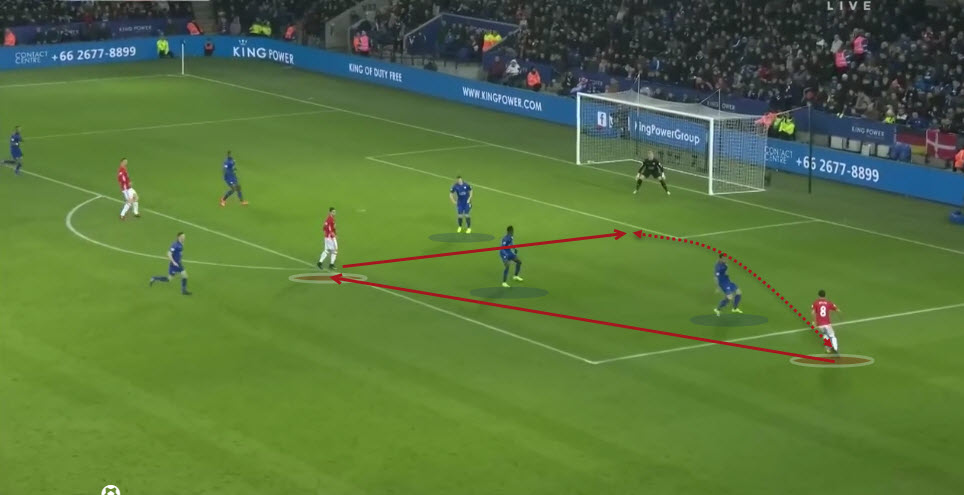 This image is taken from the move prior to the third United goal. With Juan Mata in comfortable possession in the wide area of the field.

There should be no immediate danger to the Leicester goal as they are numerically superior in and around their penalty area. Instead the immediate defenders fail almost completely to react as the ball is shifted centrally. Again they fail to react as the ball is then played through the static and passive defensive line for Mata to run back on to and slot past the Leicester goalkeeper.

Any form of switched on defending in this situation should result in the attack being quickly turned away and the third goal not going in to the net. 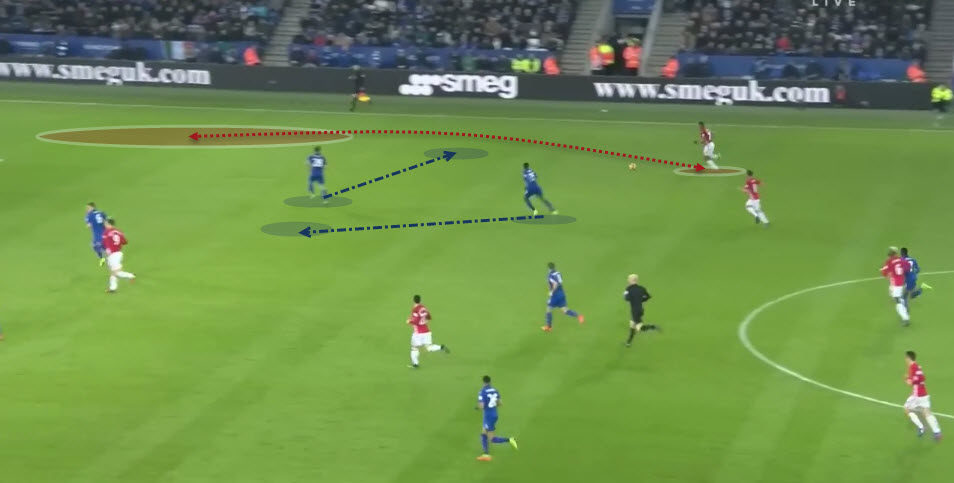 This time the ball is wide on the right hand side of the United to attack. As the United player in possession of the ball moves further up the field and towards the final third there is very little reaction from the Leicester defence.

The two Leicester players that are highlighted are poorly positioned and should they shift in to the suggested zones of the field then they would be far more solid and able to withstand the United attacking movement easily.

Instead Antonio Valencia is able to accelerate down the wide channel and completely bypass the Leicester defensive structure. 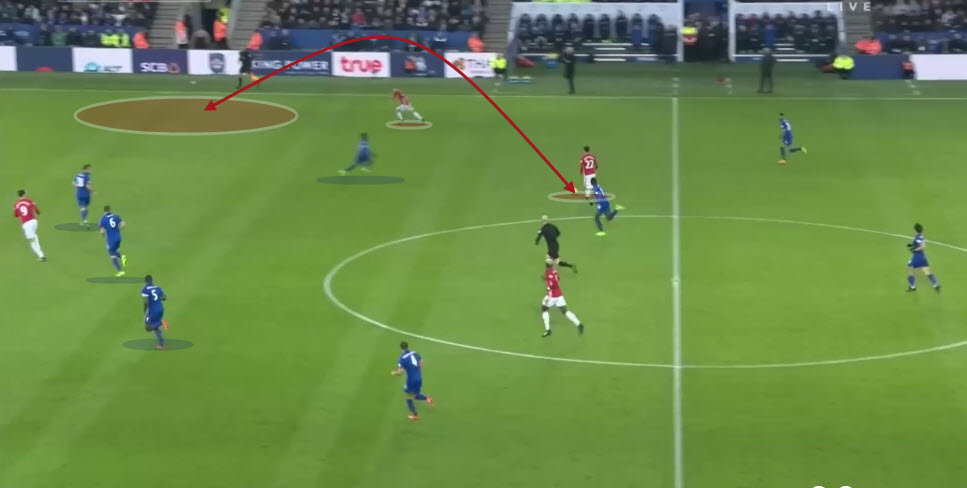 Again the immediate concern in this image comes on the Leicester left hand side. Initially United are progressing the ball along the right hand side and the Leicester defence has pivoted across to counter this threat accordingly.

United then reset the ball centrally and switch over to the opposite flank where there is space to attack. The switch is not quick given that it moves via the central midfielder and not through a quick diagonal switch.

Normally this would be enough for the defensive structure to tilt and pivot to cover the ball side of the field. Instead Leicester fail to react properly and United attack down the wide area in to space.

United drift in to spaces between the Leicester lines

Another key aspect of the Leicester system last season was the performances of N’Golo Kante in the centre of the field. With the French international midfielder now transferred over to league leaders Chelsea there is a huge gap in the Leicester system.

Kante excelled in cutting out pockets of space and stepping in front of through passes to create interceptions. Without that defensive cover there are now spaces that can be easily exploited within the Leicester defensive structure.

United continually dropped players in to pockets of space pulling the Leicester defence ever further out of position.

You can see in this example an example of the huge spaces that were open for United to exploit throughout the match.

There should be no danger in this example for Leicester and they should be able to cover the United progressions fairly easily. Instead as the ball travels wide via Bailly to Valencia at right back just inside the Leicester half we can see a huge disconnect in the Leicester defensive structure.

Jamie Vardy is obviously aware of the issue as he gestures to the United player in acres of space in the central area of the field. He does not drop back to cover the pass though and as Musa moves out to engage Valencia in possession of the ball it is a simple pass over the top to access the central space and give United a central platform to build from. 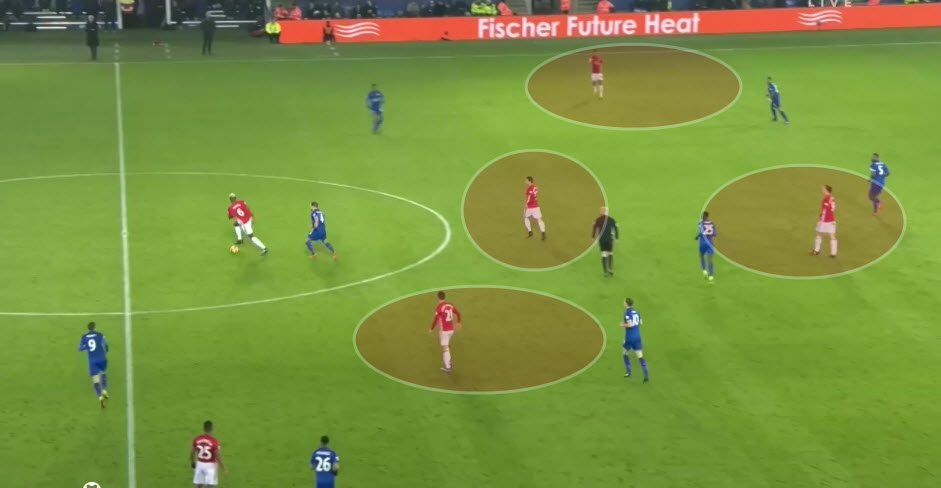 On this occasion with the ball in the centre of the field and Pogba facing his own goal under pressure from a Leicester player.

Ahead of Pogba and the ball there are four United players in the final third who have moved off of the defensive structure and are currently sitting in pockets of space. Any of these players would be able to take a pass from Pogba and allow United to move in to a more established attacking position.

Whilst all four players still have Leicester players in their vicinity the space that they have been allowed to move in to can be exceedingly dangerous at this level. 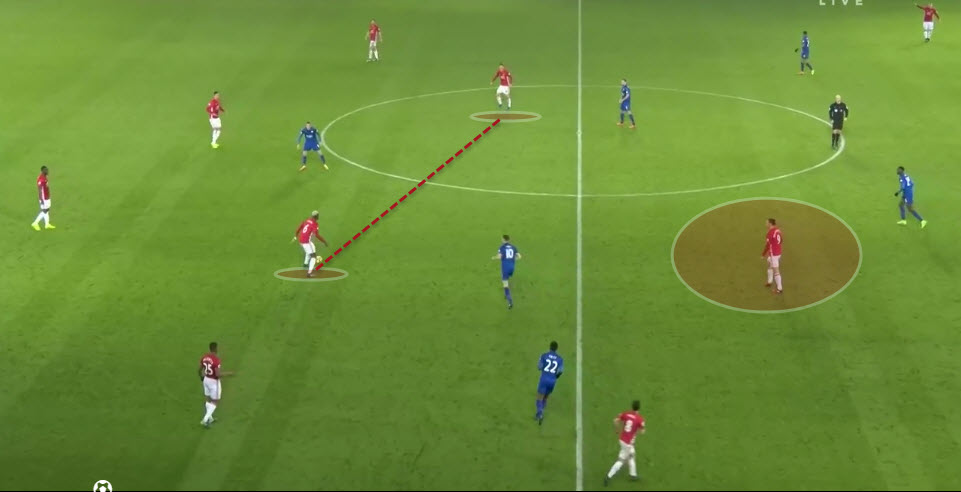 This time United again have possession of the ball in the central area and are currently in a passive attacking action where they look to retain possession making Leicester move around in and out of various defensive positions.

This time it is star forward Zlatan Ibrahimovic who has simply moved off of the defensive line in to the space between the defence and the midfield. It is criminal for a coach and defensive structure to allow a truly world class striker this much space in the final third of the pitch.

This was a dominant performance from Manchester United in keeping with the type of performance that we would have expected from the side prior to the retirement of Sir Alex Ferguson. A weak opponent was defeated in an efficient and professional display as the United attacking players in particular performed extremely well.

Thing are not however looking good for Leicester this season and relegation seems like a very real possibility.