Welcome to a midweek edition of PES Predicts, the unpopular series where this week’s big matches are simulated on PES 2017. And what match is bigger than Man Utd vs St Etienne in the Europa League last 32? None. Or no comment. Either way, you’re going to see this unfold.

In a strange turn of events Man Utd can actually rest players for the weekend trip to Blackburn in the FA Cup, meaning I’ve ensured the Red Devils are fielding a pretty strong 11 here including Zlatan and Pogba. I’ve decided Luke Shaw will probably start, but there’s still no place for Wayne Rooney. He can pick up some pointless goals at Ewood. St. Etienne have ex-Premier League flops Jordan Veretout and Henri Saivet, who will be all over this. Old Trafford (and it actually is Old Trafford) will be bouncing. 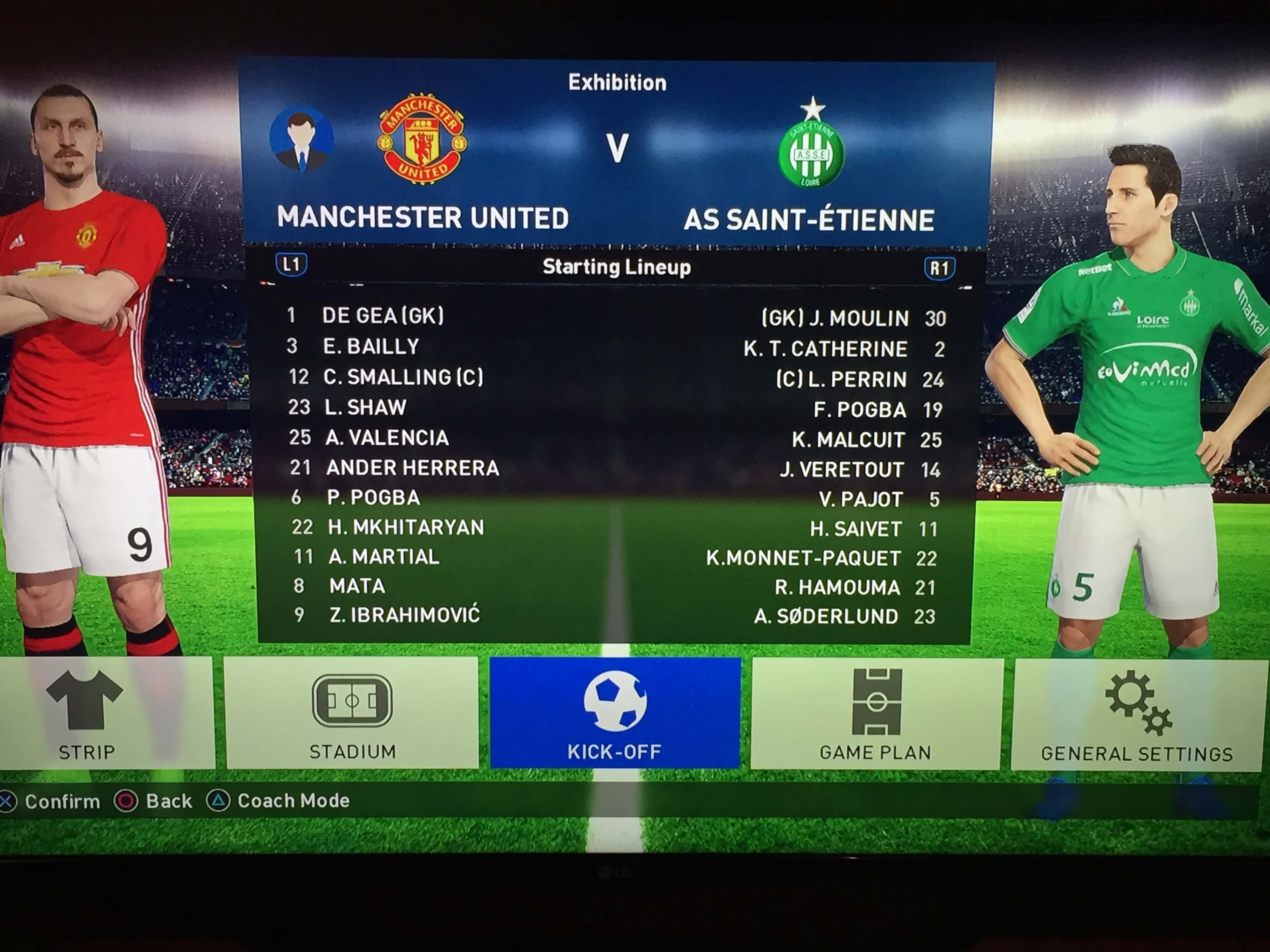 Drury and Beglin are primed for another white hot evening of Europa League action. Actually the score box says MAN ASSE which is not what anybody is looking for right now. Man Utd make the early pace and Herrera lumps a shot over from miles out. He gives a thumbs up to…well nobody really, the ball fell to him on the edge of the box. St Etienne have a player called Monnet-Pacquet which is pronounced the way you think it is. Drury says his name literally every time he gets the ball. Remarkably, St Etienne have the first shot on target, Saivet hitting a shot from the edge of the box that De Gea pushes wide. The corner is useless. 15 played.

Mata has tried to play Ibrahimovic in behind 3 times in the opening 20 minutes, pace is not his strong suit. But there’s a goal! Smalling pumps one long, Ibrahimovic gets between the centre halves on the edge of the box and shows that wonderful touch to trap the ball, before letting it drop on the half volley to make it 1-0. “First blood drawn!” exclaims Drury. Quite.

Back to a familiar pattern now of Mata obsessively trying to play Zlatan in behind. 10 years ago maybe. St Etienne keep hoofing it towards Pajot, who is up against Luke Shaw and getting no change so far. It’s a fairly dire game, 1-0 at the break. Beglin speculates if Man Utd can protect their lead. They almost certainly can.

The second half gets underway and it’s more long balls, but hang about, what’s this? St Etienne get in behind as Soderlund plays a delightful ball in behind and Hamouma sees the whites of De Gea’s eyes…and puts it wide. That’ll be costly. Man Utd nearly make it 2-0 when Zlatan knocks down a free kick and Mata’s strike is well blocked by a sliding defender. Then Martial has a free header, 8 yards out, but he gets it all wrong and it’s an easy save. The screw is being turned now…Mkhitaryan hits a dipping volley that Moulin does well to save before the defence scramble it clear. An hour played now.

St Etienne still going, a nice move ends with Soderlund having a free shot but he can’t curl it in and it goes wide. The game is starting to open up, Jose won’t like that. Ibrahimovic is denied by the goalkeeper with a towering header, surely a second goal will come soon? Ah there it is, 2-0! St Etienne were on the rack and just couldn’t get out. Herrera plays a lovely through ball between full back and centre half, Mata drifts in to that space and on his left, curls it into the far corner. Lovely finish. Nolan Roux is on for St Etienne.

Beglin’s going off it about St Etienne. He wants more from ASSE. Ashley Young is on for Martial, who has been quiet. To rub salt in Martial’s gaping wounds, Young turns his full back and floats a cross to the back stick where Ibrahimovic bullies his marker and powers a header in. 3-0, and that’ll be that you’d think. Even Wayne might get a game in France. As if to prove that point, here he comes now for Mkhitaryan. 6 minutes left.

As you’d expect, the end of the game passes by with minimal incident. A 3-0 lead for Man Utd to protect in France, but on this display, they’ll have no trouble doing that. But then again, it’s only PES…

He goes by the name of Wayne Rooney