Who’s up for another round of PES Predicts? Well tough, here it is anyway. This time, we’re at Ewood Park for Blackburn vs Man Utd in more white hot FA Cup action. Mourinho spoke this week about how he will give the game a lot of respect, and that’s had an impact on my selected team.

Originally, I had predicted sweeping changes, but now I think about it, I can see this being a very strong Man Utd side, with the squad rotated next Thursday in France ahead of the EFL Cup final. In short, it means Blackburn’s centre halves have Zlatan to contend with. I don’t think Owen Coyle has the personnel to win this. Just a hunch.

I mean the truth is I couldn’t possibly second guess Jose, I’ve put Schweinsteiger in along with Lingard and Rojo but I think whatever combination that gets picked, the Red Devils will prevail. Drury and Beglin are ready, are you? No Ewood Park of course so we’re at Burg Stadion, which is one of the PES Fictional stadiums that they’ve included for a number of years. It looks perfect for a match of this magnitude. 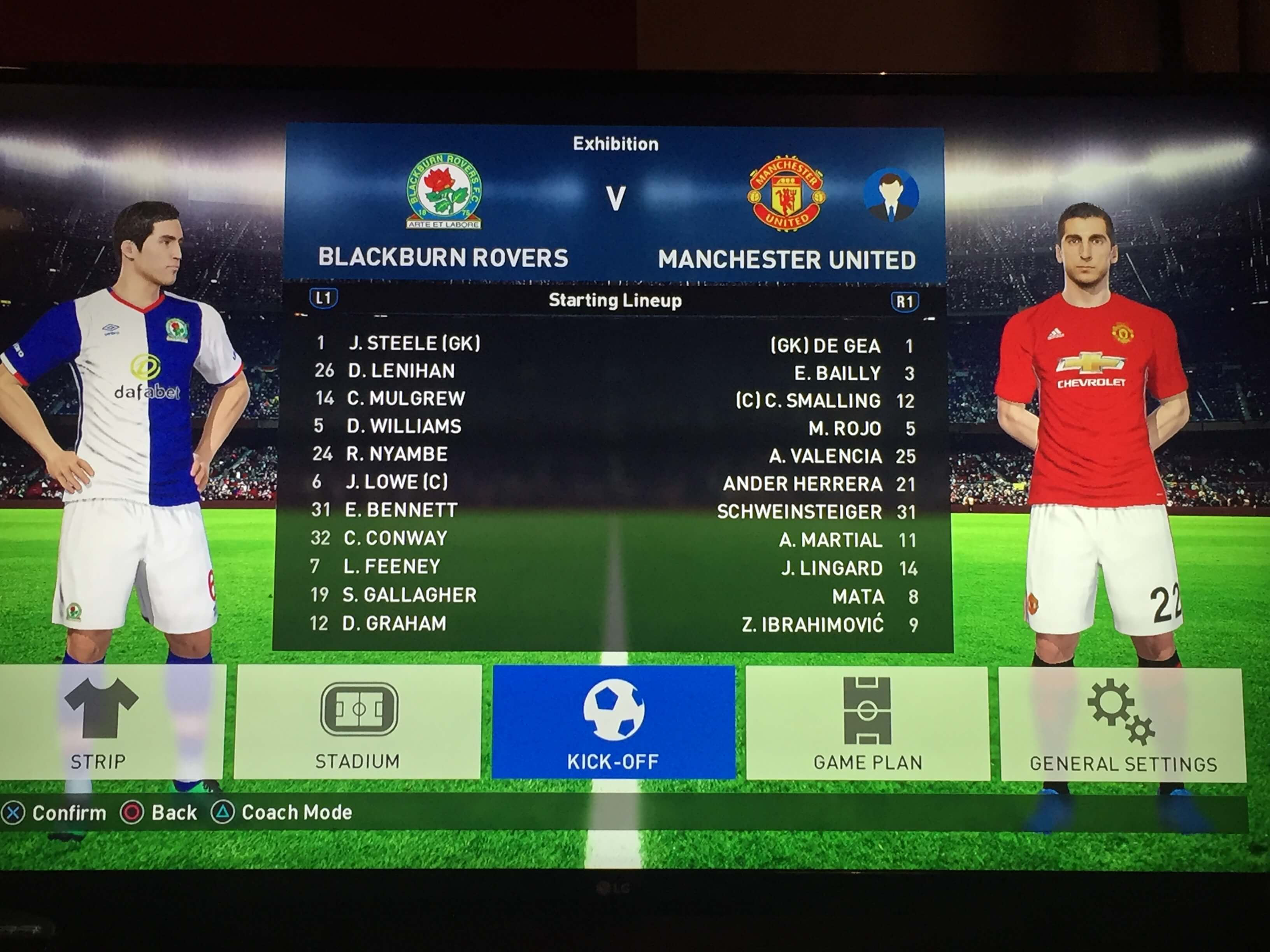 Blackburn get us underway, and they start reasonably well with Sam Gallagher having a shot blocked behind for a corner. The young man looks distraught. Cheer up it was a half chance at best. Hold the phone a second, Blackburn have scored! Liam Feeney glances a header in after Gallagher turned Smalling inside out. It’s a good header to be fair to the lad. Cupset!?

Man Utd have responded well, with a sustained spell of pressure but they don’t make a chance of note. A lot of long ball towards Ibrahimovic, whilst Blackburn are playing some lovely stuff. They toy with Man Utd, as Conway skins Valencia three times before Elliott Bennett is expertly denied by De Gea. Crikey. Ah, there we go. From the break, Mata plays in Zlatan and he slots in his fourth goal in 4 days. Some boy.

It’s gone scrappy. Neither team can get it down and play. I’m not sure Man Utd want to, bizarrely. Blackburn have a corner on half time but it’s cleared. A bit below par really, even Beglin seems underwhelmed. “Fascinatingly poised,” are his words of choice. Man Utd have scored with their only shot.

Jose has got into these. Straight from the second half whistle Zlatan lays it off for Mata, but his low shit is parried out. From the resulting throw in, Valencia crosses, Zlatan knocks it down and Martial drills it in. Normality is restored. Ibrahimovic is canny good, did you know that? Only a brilliant save from Steele stops the Swede getting his second, tipping a lot show onto the post to keep it at 2-1.

Blackburn refuse to cross the ball. It’s like Coyle’s told them he’s Arsene Wenger and they should try and walk it in. The problem is, Craig Conway can’t do it. Anthony Stokes is on for Sam Gallagher, Stoke of course in the news this week for beating up an Elvis impersonator. That’s not a line on the in-game commentary though. Danny Graham is still on, he’s barely had a touch. Marvin Emnes is thrown on, that might help. Into the final 10.

Zlatan is holding the ball in the corner. I’m not sure why, they’ve been under minimal pressure this half. Maybe this is what Mourinho meant about taking it seriously. Here’s Darmian for Valencia, that’ll waste time. 3 minutes added on. De Gea has to get out of his box quickly to lcear, but he manages. Full time. “A truly fantastic comeback by any measure,” exclaims Drury. Obviously he’s borrowed Clive Tyldesley’s phrasebook for tonight.

So, PES Predicts Man Utd to beat Blackburn 2-1 and complete a very satisfactory week for Mourinho’s men. I have to say, PES was spot on for Man Utd vs St Etienne. I guess the only surprise here is wasn’t more comfortable, but that’s the FA Cup. Even in the world of PES.

Zlatan Ibrahimovic – Too old, they said