You can catch up on Part One here

Before looking at the squad I had a look at my assistant manager thinks of the current squad. One of the biggest things that stood out to me is the age of the squad, with majority of the players over the age of 27. There are key players such as Zlatan Ibrahimovic, Wayne Rooney and Michael Carrick over the age of 30. These players are good to blood youngsters through so will be trying to use them for tutoring and match experience, before looking to lower the average age over the coming seasons.

The other problem that Rui Faria sees is a lack of leadership and I have to agree with him. Having watched a few of United’s games in real life, I have noticed that when Carrick and Rooney have been out of the team, it is a line-up of individuals and not of those team players that we need. This leads me to an epiphany. I know of one player that has leadership and teamwork in abundance. This player has captained his country and clubs to glory wherever he has been. This player is currently rotting in our reserves. This player is none other than Bastian Schweinsteiger. Despite the lack of pace, which I don’t need that from him anyway, his stats are better than majority of the midfielders in the squad. If this means that our team will have a bit more determination and winning mentality then I am willing to take the hit on the pace in the middle. Pogba will just have to pick up the strain. 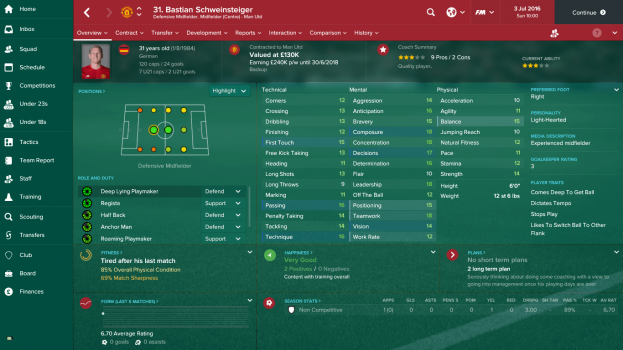 Although my assistant manager thinking that we have strength in depth here, I am genuinely worried about our defence. Smalling is the only player viewed as being rated as 4* and there is a lack of genuine right backs in the squad, with only Darmian seen as a natural there. Although we also have Valencia, who can fill in if needed. We do have one of the best keepers in the world, but if the defence is not up to scratch then he won’t be able to stop everyone on his own. With this in mind, I have come up with two very similar formations, one to be used at home, and one to be used away from home. The only difference being one having 2 CMs and the other having 2 DMs. Firstly, here is our home formation: 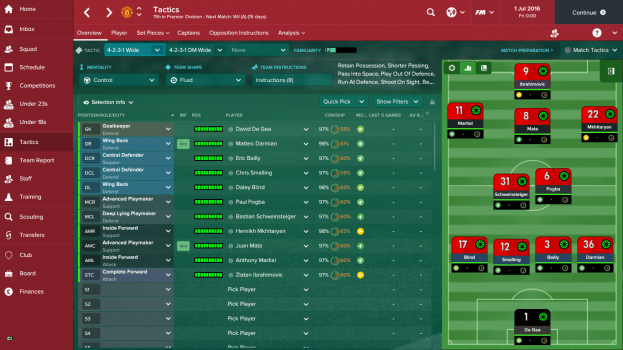 As stated, our formation at Old Trafford will have 2 central midfielders with the recalled Schweinsteiger next to Pogba in the middle. These two will be the pivot of our team, picking the ball up from the defence and then allowing the front 4 players to run amok against the opposition. Both Bastian and Paul have high stats for passing, technique and vision and I expect them to have the majority of the ball in every game we play at home. We are blessed with many players that can fill this position so if this isn’t working then we can switch it up to find the right balance.

I have decided to go with Daley Blind at left back instead of Luke Shaw because of Blind’s higher attributes for things like workrate, teamwork and positioning. With no protection from the wingers, we need to select the best defenders and I feel that Blind will be able to work by himself. I just don’t quite trust Shaw to be able to cope on his own. 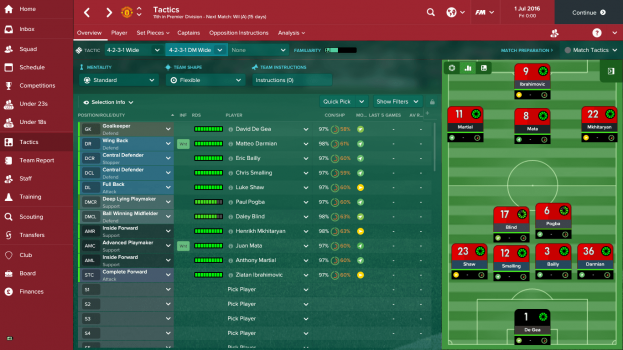 As stated, there is only a very slight difference in the away formation where I believe that we need to provide a little bit more protection to the shaky defence. That is why I have opted to drop the two CMs into DM positions. This has also brought about a slight change in personnel, with Blind moving into the DM spot instead of Schweinsteiger. Blind has comparable passing stats, but also has higher work rate, which I feel will work well with Pogba being told to still join in attacks. This means that Shaw comes into left back, at least until January. With Blind helping out, I think that Shaw will be okay to fill in, but will be looking to strengthen this part of defence as a priority along with RB.

As with the home formation, the front 4 will be told to run the show and score freely. Martial, Mata and Mkhitaryan will be told to swap positions regularly and run at the defence to keep the opposition guessing. Meanwhile, Ibra will just be told to be Ibra and bang in any opportunities that come his way. 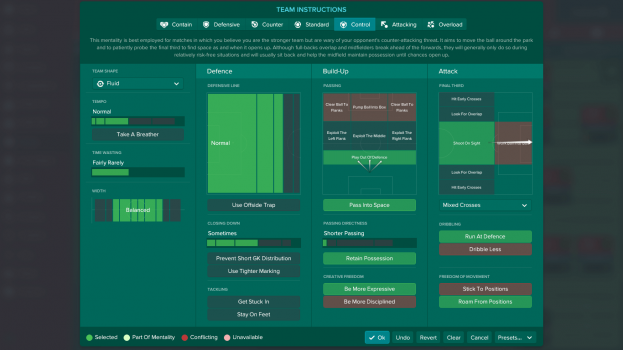 As you can see there are a few key players that have been left out of our preferred line-ups and although this doesn’t mean that their Man Utd career is over, it does mean that players such as Rooney, Depay or Schneiderlin will need to take any chances put their way in the cup competitions. Come January, maybe these players will be plying their trade elsewhere.

Join us next time for the next instalment when we look at the Scouting team.