After the setting up of our tactics and scouting team, it was time for the squad to go on their pre-season tour to Holland. I thought this was a weird place to go, as we aren’t going to be playing any Dutch teams in our time there. With Rooney’s Testimonial and the Community Shield coming at the end of August, there are only 4 pre-season fixtures booked in. Hopefully this will be enough to build the players’ fitness. Our only fixture of the training camp in Holland was a game against Swiss team Wil. After leaving Holland, we would travel to the Czech Republic to face Sparta Prague and Teplice, with our final game against Northern Ireland opponents Portadown before touching back down in Manchester.

During these 4 games, I have decided to play the home formation shown in our tactics article as this will be our normal formation. This will also be used away from home against the so called lesser teams as we will still be expected to be on the front foot. I have also chosen to use our strongest XI for every game, with the subs bench being filled up by fringe first team players. Normally, I would use pre-season to blood some youngsters and give little game time to the first XI as I don’t want any injuries but we really need to hit the ground running and pick up early wins. The time for blooding the youngsters will come when we are in multiple cups and the games are coming thick and fast.

Although you can never get too excited with pre-season results, I am very pleased. There were good performances all around, including the defence which is our main worry, which shows that the tactics are working. The supporting players behind Zlatan were scoring the majority of our goals which again shows the tactic of letting them express themselves is working. Although he didn’t get on the scoresheet, Mata was pivotal, providing plenty of chances for his team mates. Everyone was getting match fit and there were no injuries to report back on! Even Schweinsteiger managed to improve with each game which shows that bringing him back into the fold was the correct decision, for this season at least.

Before ending our preseason with the Rooney Testimonial, I received the following email in my inbox: 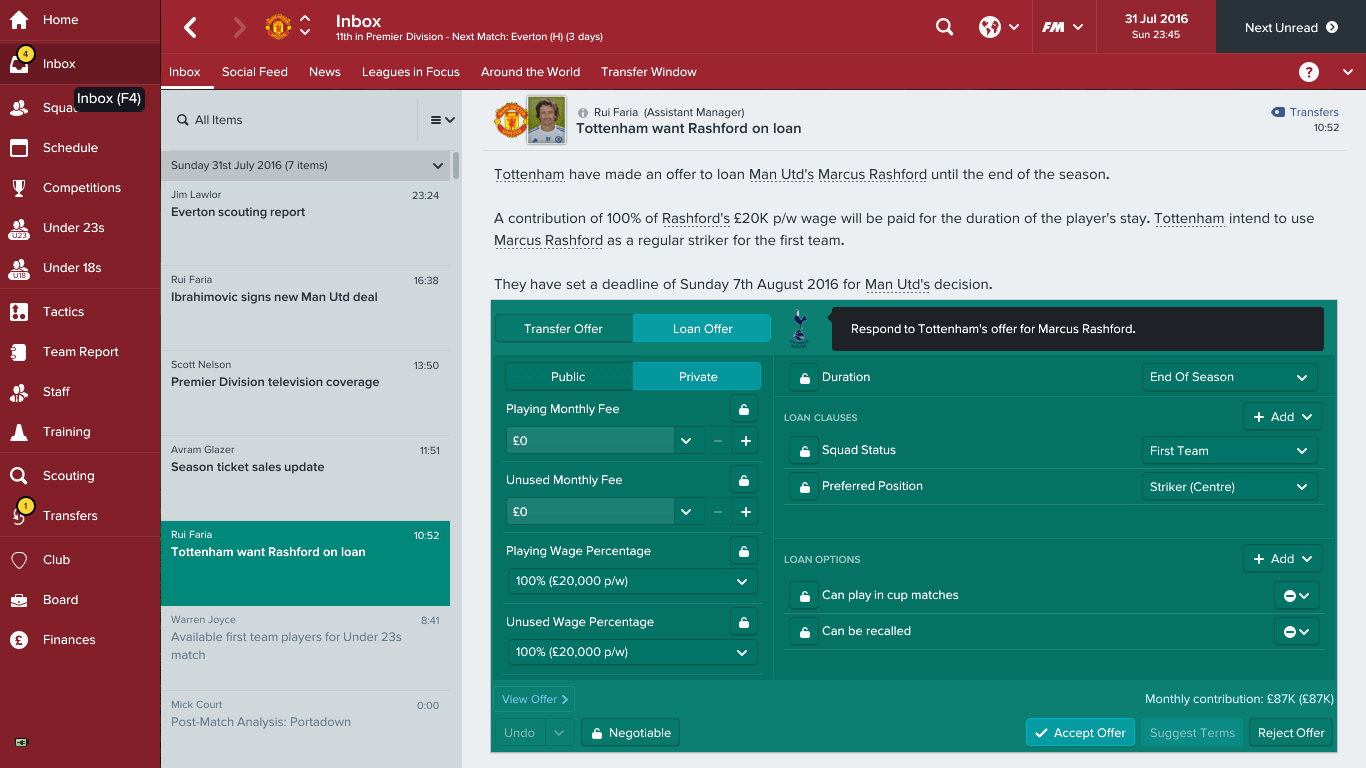 I spent a lot of time pondering this offer. In real life, Rashford is indispensible to the team as a back up to Zlatan. He can also be deployed on the wing if needed. In the game, he is low down the pecking order with players like Rooney and Martial able to take over from Zlatan if needed. I worried about the lack of playing time for him, but do I really want to send him on loan to a rival? If this offer was from a team that was outside England, I think I would be immediately accepting it. Instead, I stalled on the offer, thinking that I would give Rashford the chance to play in the Testimonial and then make a decision.

I made some changes to the starting line up for the game against Everton, replacing Zlatan with Rashford as above, and also bringing the main man Rooney into the side in place of Juan Mata. I felt it was only right that he got to play 90 minutes in his own testimonial. Other than this, the side was unchanged.

We ran the game from start until finish, apart from a shaky start to the second half. The opening goal was scored on 6 minutes, where Rooney powered through the centre of the field before picking out Martial on the left wing. He took one touch to bring it inside on to his right foot before bending the ball deliciously into the top right hand corner, from all of 30 yards! What a start! Another long shot gave us the second goal, although Pogba’s initial shot was spilt by the Everton keeper with Rashford on hand to tap in the rebound from 6 yards. Maybe we shouldn’t let him go. 2-0 and this is how the game stood as we went in for the break.

As stated above, we allowed Everton back into the game at the start of the second half as Coleman ran past Blind and put a cross into the box. Both Bailly and Smalling run towards the flight of the ball and completely left Niasse on his own on the penalty spot. Predictably, the ball went over the two centre backs and Niasse was left with a simple headed finish. This highlights the need for reinforcements at the back, not only with the centre backs but left back where Blind was beaten far too easily and should have stopped the cross. After this goal, a few changes were made with Jones and Zlatan coming on for Bailly and Rashford, who both played poorly. This seemed to wrestle the game back from Everton’s grasp and the game was killed off in the 80th minute when Jesse Lingard, on for Mkhitaryan, swung a free kick into the box, which Jones met with his head and sent it out of the keeper’s reach.

This was a very professional performance, with 28 shots and 13 on target, and a mammoth 63% possession throughout the game. I hope that we can carry on this type of performance into the league campaign. If we play like this, we will batter most of the teams in the league. As stated, both Bailly and Rashford were poor, which was disappointing. It shows the need for new blood in defence. I have also decided to reject the loan offer for Rashford. Although he played poorly, he will always be a good sub to have with his pace. Also I did not want him going to a potential rival. Maybe this situation will be revisited in January.

This concludes an unbeaten pre-season, only conceding 3 goals and scoring an impressive 15 goals in the 5 games. Please join us next week when we take on Leicester City in the Community Shield in our last game before the Premier League kicks off!