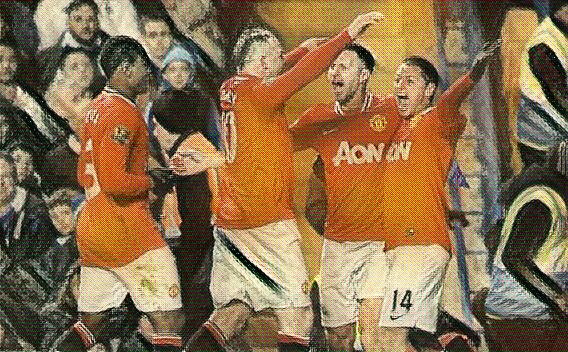 The Chelsea vs United 3-3 match is another match that can be an ambassador for the Premier League. It had everything, a comeback, great saves, a coming of age sort of a game for a young keeper, penalties and of course the Drama.

The game was breathtakingly brilliant contest saw Chelsea take the lead through a Johnny Evans own-goal. Going past Evans, Sturridge took aim but he could only find De Gea who deflected it onto Evans whose touch took it into the back of the net. United reached half-time just a goal down but they just 20 seconds after the restart, Juan Mata scored a superb goal. Not many would bet on any keeper keeping that one out. 2-0 down and it would get worse before it got better. Just 4 minutes later David Luiz’s header would take a deflection and disturbed the goal behind the Spanish keeper yet again.

Then the gaffer Sir Alex played his Mexican card and introduced Javier Hernandez. Chicharito’s introduction suddenly energized a demoralized United. Minutes after his introduction and Luiz’s third, United won a penalty after Sturridge clumsily brought down Patrice Evra in the box. Rooney stepped up and brought United back into the game. Not much time later, United won another penalty although this time the foul was a bit soft. Yet again Rooney converted and United were just a goal behind. They looked as though they would score another one any moment and they did. Chicharito rose highest and headed Ryan Giggs’ cross past Petr Cech. The goal was again facilitated by Rooney whose sublime control allowed him to shoot and force a save from Cech. The ball found its way to Giggs and Hernandez did the rest.

Even at 3-3 it was not over, and it was surprisingly Chelsea who looked like they would go home with the winner. Cahill’s shot was set to become a screamer of a winner but out of nowhere, the lean, thin and much-criticized De Gea rose and saved his team. And he did once again when Juan Mata’s free-kick placed to inch-perfection was parried behind. It was Scholes, the comeback man, who gave away a silly free-kick and De Gea rescued his teammate with the Stop of the Season.

This match was over on the field, but both managers would complain about the officiating standard. There were a number of controversial decisions including United’s second penalty. They were also at least one legitimate claim for a United penalty in the second half. There even was a well-timed Paul Scholes tackle in the somewhere. Yes, you read that correct!