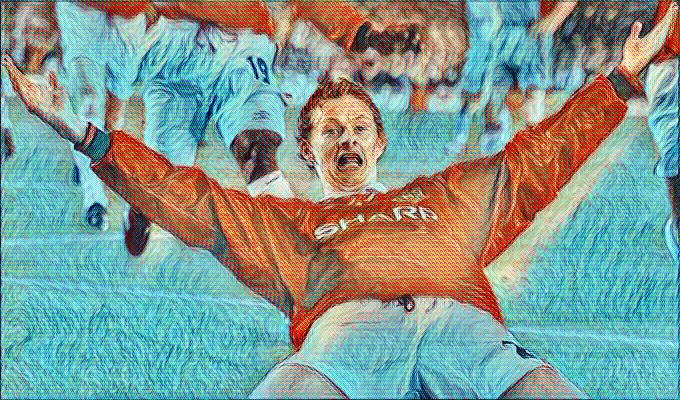 “Who put the ball in the German’s net? Ole Gunnar Solskjaer” is a chant regularly belted out in the Stretford End by the Manchester United faithful. Scorer of the winning goal in the Champions League final of 1999, Solskjaer prodded home with virtually the last kick of the match. The Champions League trophy was the final piece of the jigsaw in a season in which United blew away all before them and completed a historic treble.

Ole Gunnar Solskjaer was signed in the summer of 1996 from Norwegian club, Molde. A striker who had been prolific in the domestic leagues at home, he scored an impressive 31 times in only 38 appearances during the 1995 season. Sir Alex Ferguson parted with around £1.5m for the services of the hot shot, peanuts in modern day football. With the likes of Andy Cole and Eric Cantona leading the line at United, it was clear that Solskjaer was brought in to provide cover. Given the learning curve in which so many foreign signings go through, adjusting to the physicality of the league, the culture and so on, Solksjaer took to it like he was born to play in England. Given the number 20 shirt, Ole went about more than just settling in. A goal against Blackburn Rovers just six minutes into his debut set the tone for an impressive first season, which yielded over 15 more goals. United went on to win the league and Solskjaer was given the “babyfaced assassin” nickname from certain quarters.

“Super sub”. If you typed this into an online search engine then I am pretty sure a big picture of this ex-Red Devil would appear. Solskjaer netted over 100 times for United in an eleven-year career. Many of Solskjaer’s goals were from the substitutes bench.

Solskjaer on his fantastic record from the bench: ‘I probably didn’t analyse the whole game. I had to think about myself, how can I do the most damage to the opposition if I came on. I sat there and studied games, but I didn’t exactly study the strikers. Thierry Henry could do whatever he wanted as far as I was concerned, that was Jaap Stam’s problem. Instead I would study the full backs and defenders, to see what they were doing wrong’.

Solskjaer continued to play a bit part as United brought in Teddy Sheringham and Dwight Yorke, but whenever he was called upon he never let his team mates down. During an away game at Nottingham Forest in the treble winning season, Solskjaer was sent on with 20 minutes remaining and the scoreline showing 4-1 to United. Ole Gunnar was not happy at just having a run around and set about scoring four more goals to finish the game with the three points and the match ball.

Winding down towards the twilight of his United career, Solskjaer was played out on the right and chipped in with sixteen goals in the 2002-03 season. Injury was to prevent the Norwegian from scoring more goals to push himself up the all-time records. In 2008 United played Espanyol in what was to be the second highest attendance of a testimonial on British soil. Over 65,000 watched as Ole Gunnar Solskjaer made one more appearance in a red shirt.

So this was the man who put the ball in the German’s net, and Liverpool’s, Arsenal’s, Spurs’ (you get the idea). A banner at Old Trafford reads “20 Legend”. It’s a fitting tribute to the baby faced assassin. Thank you for the memories Ole. “And Solskjaer has won it”, marvellous.