The time has come for the first competitive game of my reign in the Manchester United hot seat, against Leicester City in the Community Shield. I feel confident, I feel ready, and the team feels ready. Preseason was good, if not great, with few goals conceded and the tactics sufficiently worked on. I felt that we had the making of Ranieri and his Leicester side. The champions had restocked their team with the likes of Slimani, Amartey and Mendy who would be likely to start our clash accordingly to our scouts. Also according to our scouts, they are going to be lining up in a 4-1-4-1 formation. This should work well for us, with any long balls up to Slimani being mopped up by our two central midfielders before Mahrez and Gray even get a chance to get close. The scout reports state that their biggest strength is their work rate and we will need to match that if we are to win this game. 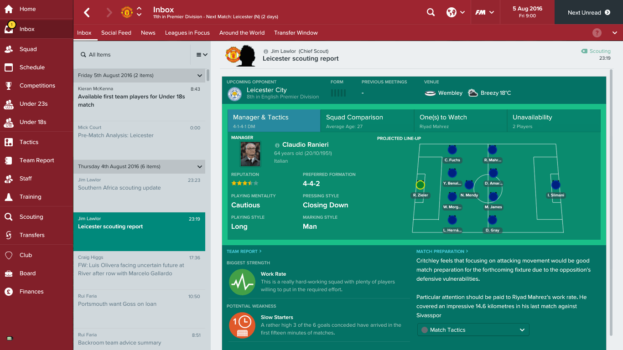 Our efforts have been helped by the fact that both Danny Drinkwater and Jamie Vardy are currently injured and ruled out of this fixture. This news has put us as firm favourites with the bookies, with Leicester as far out as 7-1! The unavailability of these two has made me even more confident. 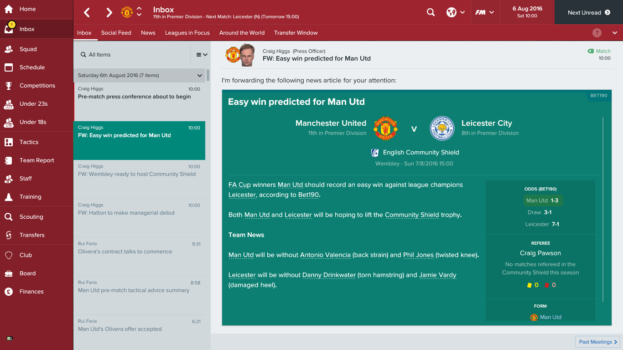 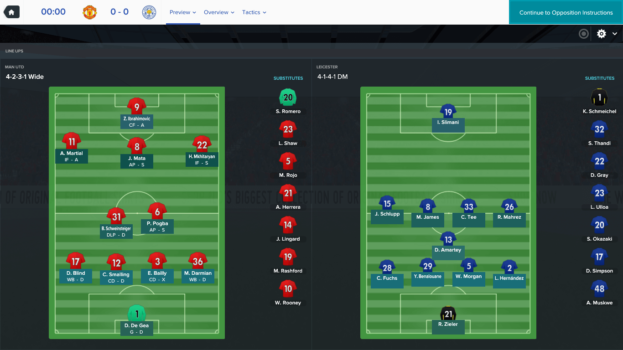 As predicted by our scouts, Leicester would start with a 4-1-4-1 formation, and we started with our normal 4-2-3-1 lineup. I have reinstated Mata and Zlatan to the starting lineup. The board may not think that this competition is important, but I want success and trophies coming into this club as soon as possible. This will hopefully be the start.

We started the game very well and were firing shots on Leicester’s goal before they could even settle themselves. In the 11th minute, we went ahead as Martial got to a Mata through ball before his marker, just inside the area and curled it past Zieler in the Leicester goal. It was a great goal and only went further to show that playing with two inside forwards will be very fruitful this season.

That is the way the scoreline stayed until half time, although that doesn’t paint the whole picture of the whole half. In the 22nd minute, Daniel Amartey was sent off for a scissor tackle on Paul Pogba. We would play the remainder of the match against 10 men. The rest of the first half was played entirely in Leicester’s half as they failed to get out of their half. They registered only one shot, which was off target, in the first 45 minutes compared to our 20 attempts on their goal. 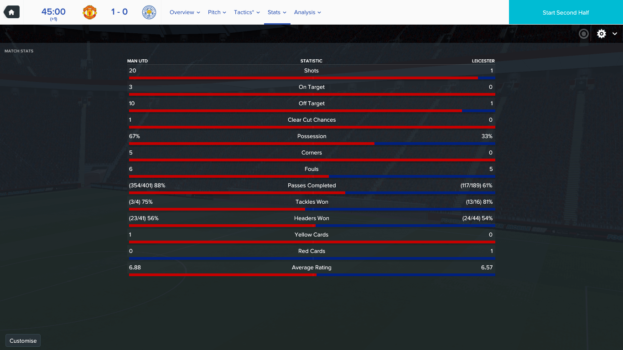 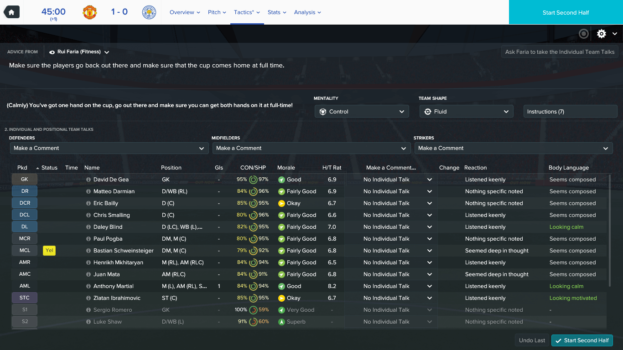 There may not have been any goals in the first half after the sending off but it had effectively ended the game. I took off Bastian and brought on Herrera in the hope that the extra pace and direct passing in the middle would be too much for the 10 men in blue. This seemed to do the trick as our lead was double and it was that man Martial again who got the goal. This was a much easier conversion than the first goal, though, as Martial was left with an open goal after Zieler had saved a close range Ibrahimovic effort. 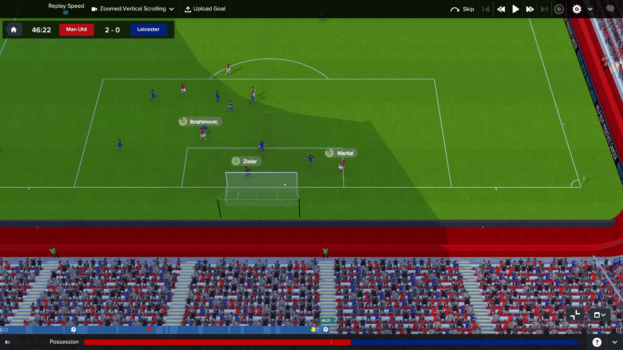 The second goal really did put an end to the game in the view of a competitive match though and it seemed that Leicester were hoping to escape without further punishment. This tactic worked well until Bailly was pushed when trying to reach a Mata free kick, with the referee pointing to the spot. This provided an excellent opportunity for Martial to complete his hat trick, which he duly did with aplomb. We let our guard down immediately after this goal however and the breakdown of one of our corners lead to a counter attack for Leicester led by Gray who placed the ball through to James who coolly slotted the ball past De Gea.

This lack of concentration led me to make the 2nd and 3rd substitutions of the game, with Lingard and Rashford replacing Zlatan and Mkhitaryan who had both had poor games by their standards. This gave us fresh impetus up top but by now Leicester had placed everyone behind the ball. It was only in the 89th minute that another goal was scored, this time Rashford reacting quickest to a blocked Martial shot with a left footed finished from around 10 yards out. This again proves that we were correct not to send the youngster out on loan, tough luck Spurs!! The game was not finished yet, as Mata added his name to the scoresheet in the 2nd minute of added time with another rebound from a Martial shot, this time from only 6 yards out. Martial was genuinely at the heart of everything good today, and arguably had 2 assists to add to his 3 goals. He left with a 9.7 rating, the match ball and the acknowledgement from his manager that he is likely to be a very key player for us this season. The final whistle blew and WE HAD WON THE COMMUNITY SHIELD. 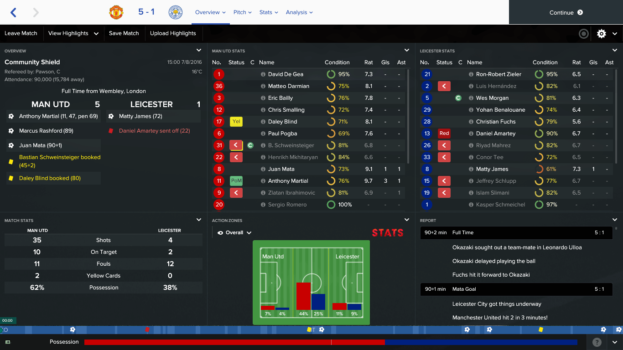 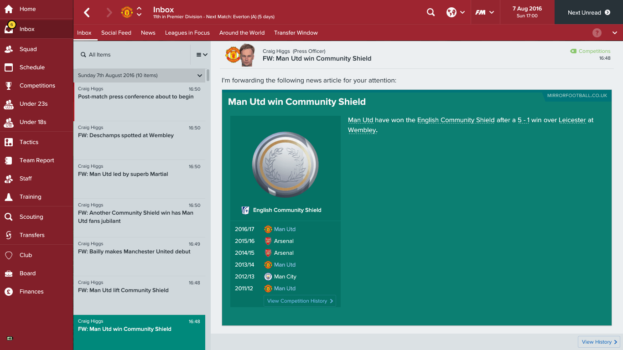 I was very happy that we have won the first trophy of my reign (the first of many!). As stated, although it wasn’t deemed important by the board or the fans, it is always good to get to a winning start to the season.

Join us next week when the Premier League season starts with a home tie against Hull sandwiched in between two away trips to Everton and West Ham. 9 points must be the goal come the end of August!