The first competitive month of my reign is here and, as said previously, I feel it’s a fairly easy month which we should be looking to pick up 9 points, with winnable games against Everton, Hull and West Ham. Let’s get this month started then!

Before we had time to even start travelling to Goodison Park for our first game against Everton, our preparations were rocked with the news that our star of the preseason, Antony Martial, would be out for the next 6 to 7 weeks with strained knee ligaments suffered in training. It would be hard to replace the man who scored 7 goals in 7 games including a hat-trick against Leicester in the Community Shield. 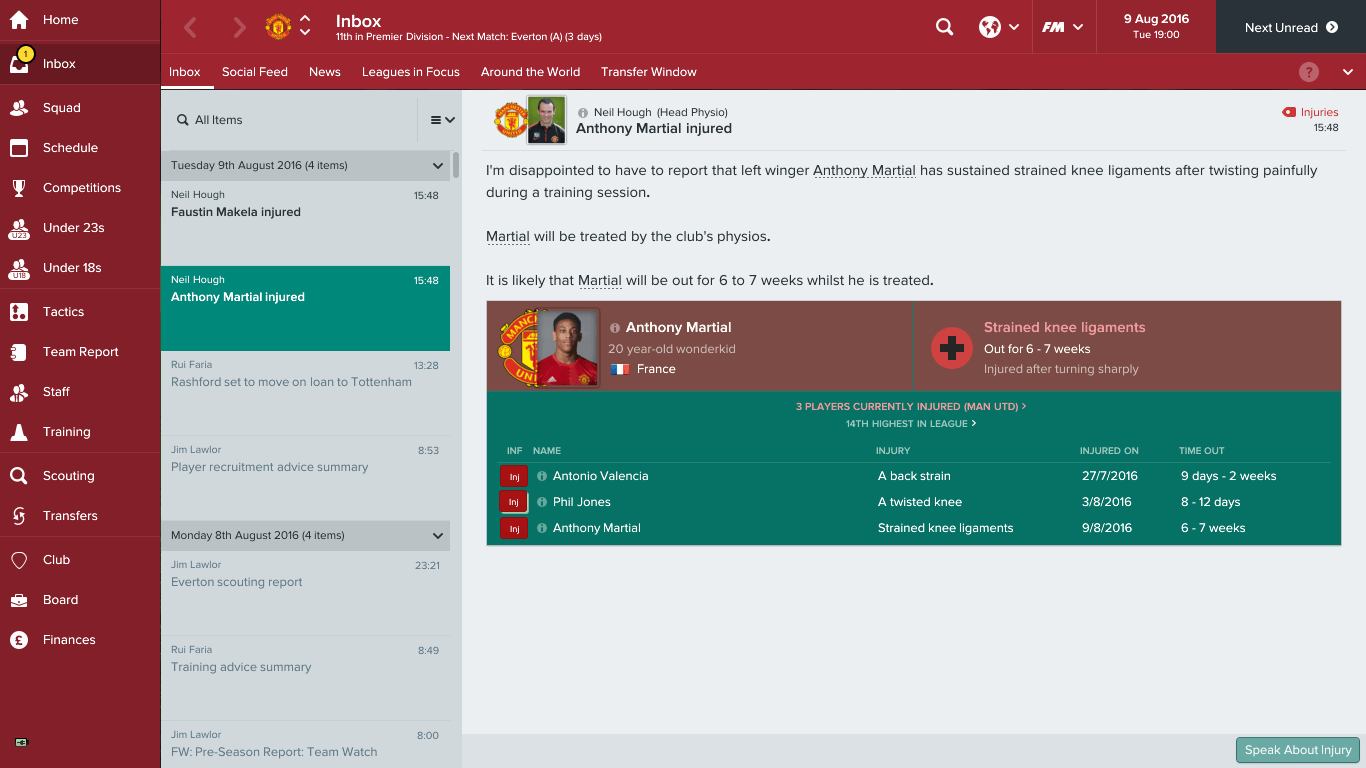 Martial would join Valencia and Jones on the injury table, although the other two should be back before the end of this month. Other noticeable absentees were Smalling and Pogba who were both banned for the first game of the season. I should have noticed this previously so that I could have tested out their replacements. This was a schoolboy error, I mean who could forget #Pogbanned?!

Marcos Rojo and Jesse Lingard would replace the two banned players. As Jones was injured, I didn’t really have much choice in choosing Rojo, who hopefully would not get sent off for any rash challenges. I opted for Lingard to replace Martial instead of Rashford because of Lingard being right footed and being able to play him as an inside forward. This would allow the chosen tactic to continue despite Martial being injured. Hopefully, we will be able to put 3 past them like in the Testimonial. 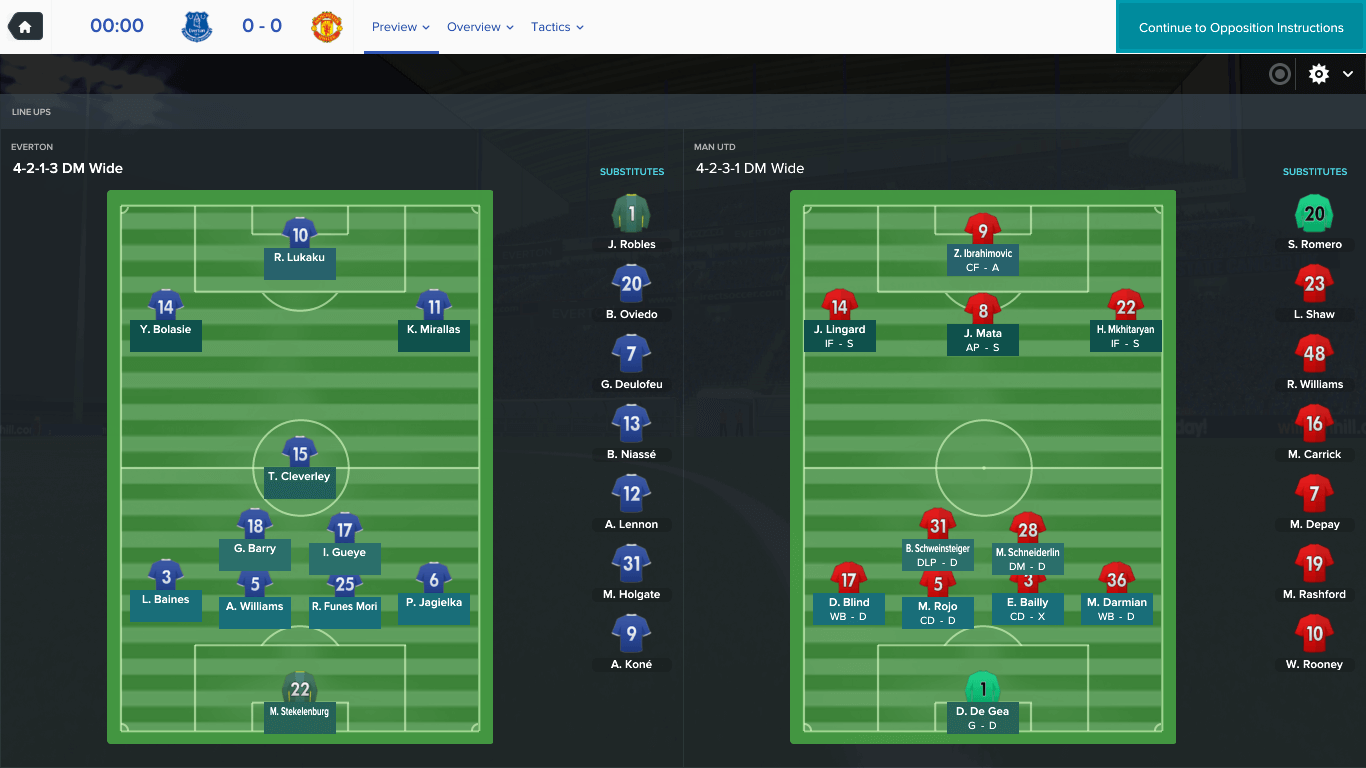 Well, we didn’t quite manage to put 3 past them, but a 2-0 scoreline will do me nicely. A win and a clean sheet in the first game of the season is definitely a good way to start off. Again we started quickly with a first goal in the 7th minute from Zlatan Ibrahimovic. This time it was a quick counter attack which was started by a long drop kick by De Gea. His kick was headed by Mata into the path of Lingard, who teased his marker before chipping a through ball for Ibra to run onto, who finished from just inside the area. It was a great assist by the young winger. Another goal from Ibra came just after half time but this was all the doing of the big man. He picked up a short pass from Lingard around 25 yards out and curled it into the top corner past Stekelenburg. We pushed for more but most of the players tired after 60 minutes, with Rooney, Shaw, and Depay coming on for Mkhitaryan, Schneiderlin, and Mata respectively before the game was up. To be fair to Everton, after the second goal they were on top but never really threatened with the DMs picking up a lot of the loose balls. I was especially happy to see the good performance from Lingard, with two great assists, which made me feel that we could cope with the loss of Martial for the next couple of months. I just hoped that he would not get injured too. One win out of one so far in our quest for a perfect month. 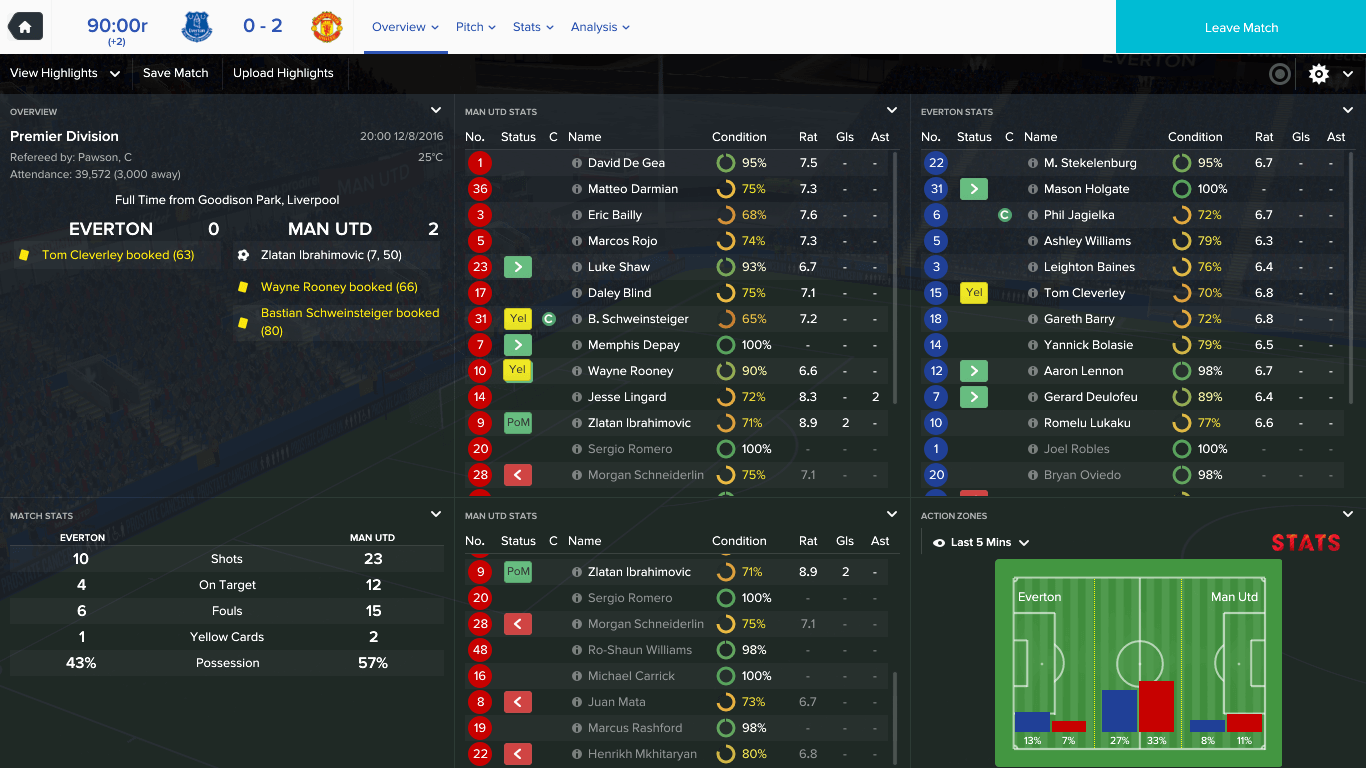 For our first home game of the season, we welcomed recently promoted Hull City to Old Trafford. I brought Pogba and Smalling back into the teams after their suspensions ended, and pushed the two DMs into CMs as we are at home. With Hull only playing with a lone striker and no attacking midfielders, the hope would be they wouldn’t be needed as defensive midfielders and instead, they could be used to start our attacks from. 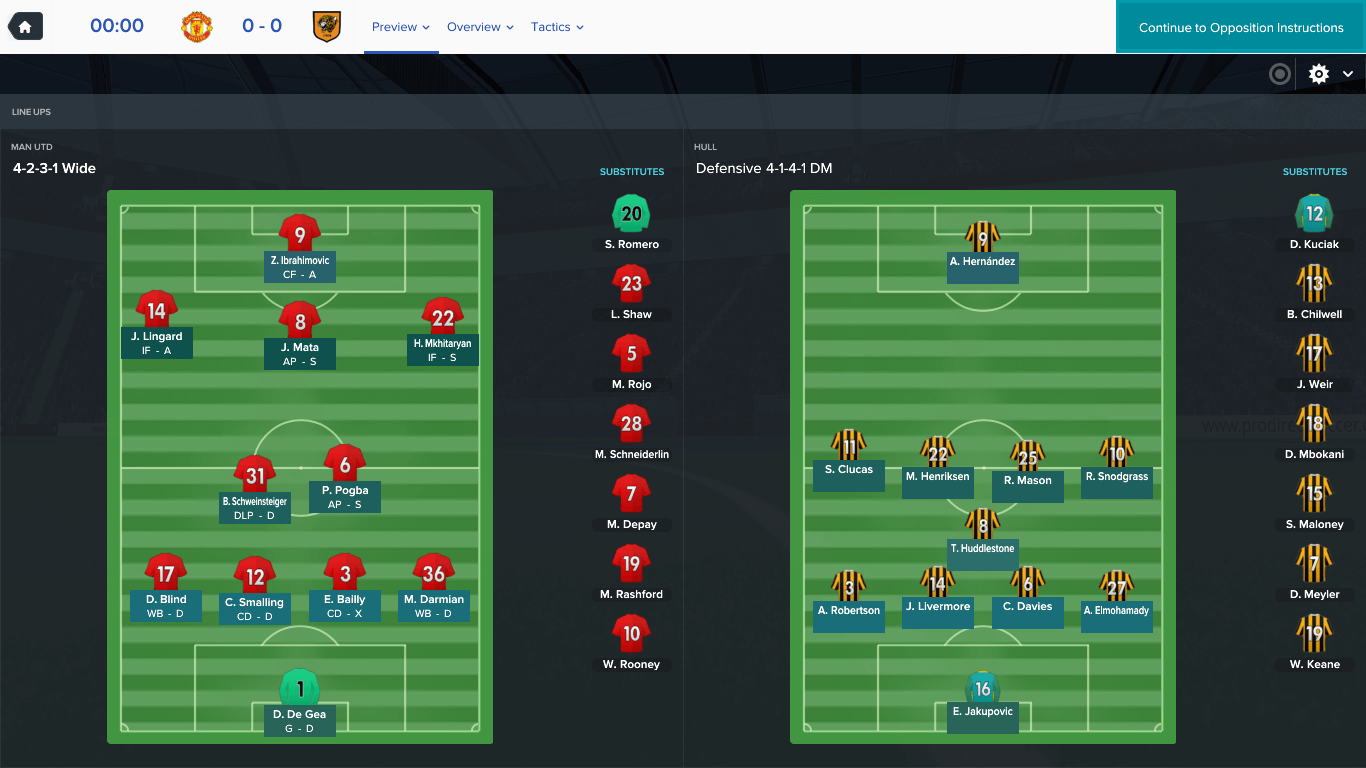 Well, this just won’t do. I almost feel betrayed by the players in only our second league game of the season. They were a completely different team to the Everton game. Again, we started quickly, and Ibra had the chance to put us ahead from the penalty spot in the 8th minute but Jakupovic saved low to his right. This set the tone for the rest of Ibra’s game as no balls into the big man seemed to stick, and when he did get the ball, he was unable to hit the barn door! He had 10 shots all game, with only the missed penalty on target. The other players seemed to follow suit as well, as the whole team had 43 shots, with only 10 troubling the keeper. We just never seemed to get going. We were expected to win, and the team played as though the game was already won without them trying. I let them know in no uncertain terms that results, and performances, like this, just will not do. Hopefully, they will react in the West Ham game and show that this was just a one-off blip. 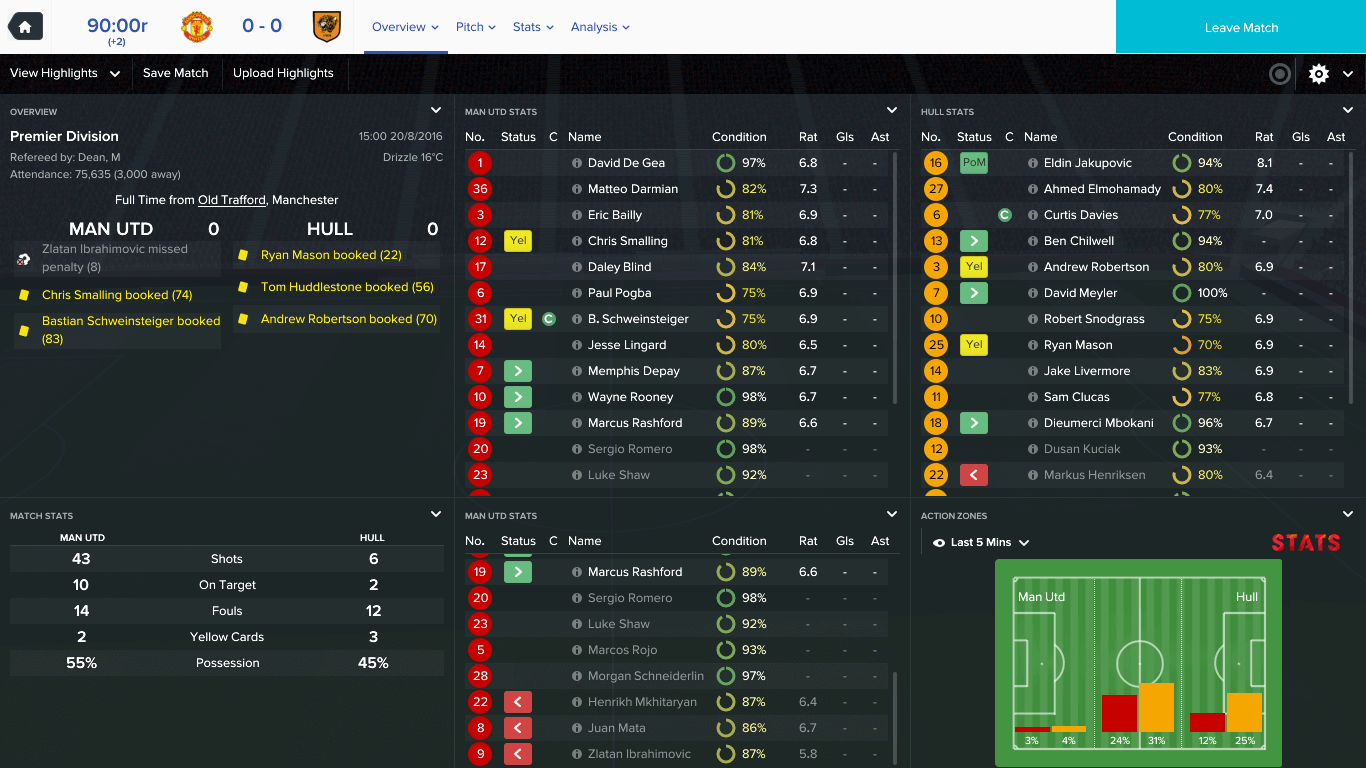 Before we could travel to that game against West Ham, however, we found out our opponents for the group stage of the Europa League. I was fairly happy with the draw, where we are expected to beat every team home and away. This will be good as I will able to rest some players and give some game time to some of the youngsters on the books. I want us to compete on every front and every competition this season. The ability to rest some players in these games will really matter as we are away from home for 5 out of 6 games immediately after the Europa League games. Thanks, Premier League bosses! They obviously don’t care about the coefficient! 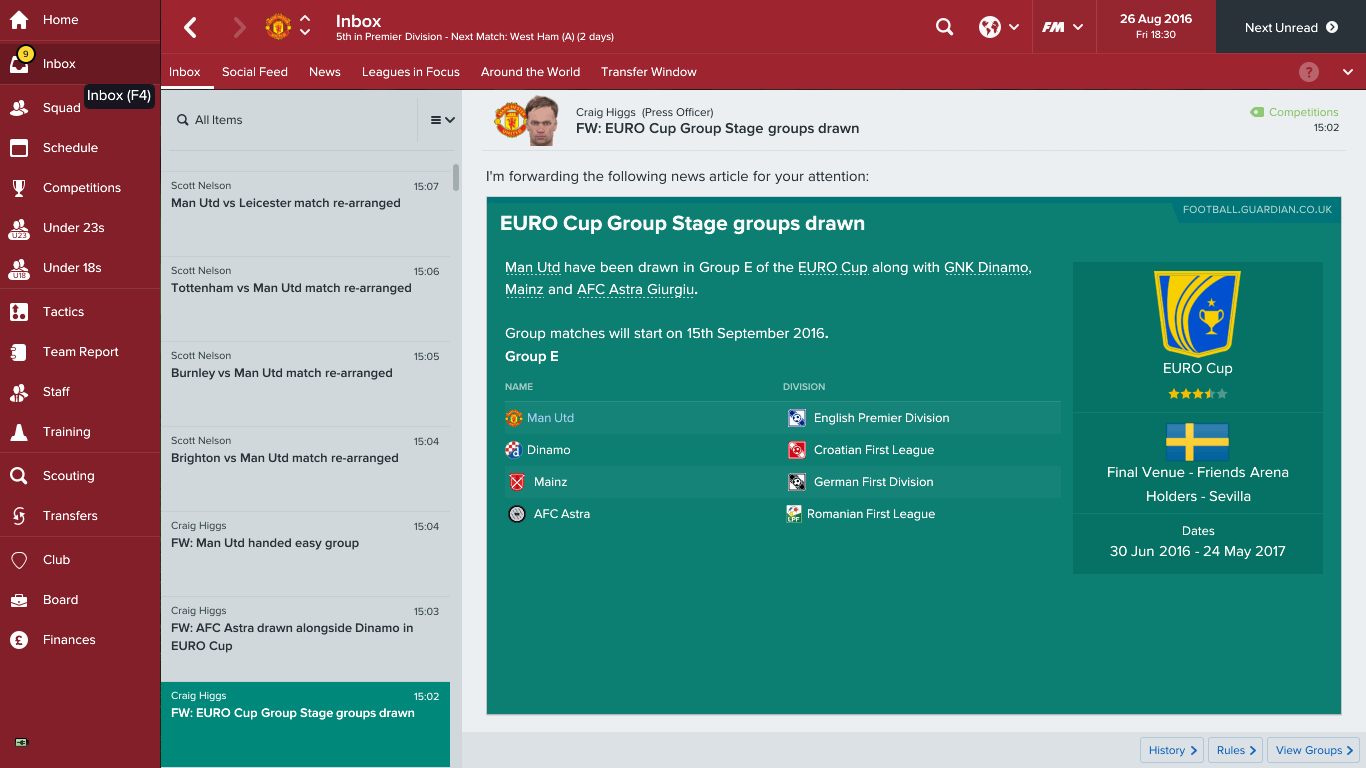 On to our final game of the month and we go to the London Stadium, which is a sellout. I just hope the fans have brought along their binoculars! I replace a slightly tired Schweinsteiger for Shaw as I moved the two midfielders into their away positions as DMs, which means that Blind moves into the middle. I also decide, like every great manager, that it was the fault of the tactics for the stalemate against Hull and that the three attacking midfielders need a shake up. The personnel stays the same, but Lingard goes to the right, Mata to the left and Mkhitaryan moved into the middle. This could be a tactical masterstroke or tactical suicide. 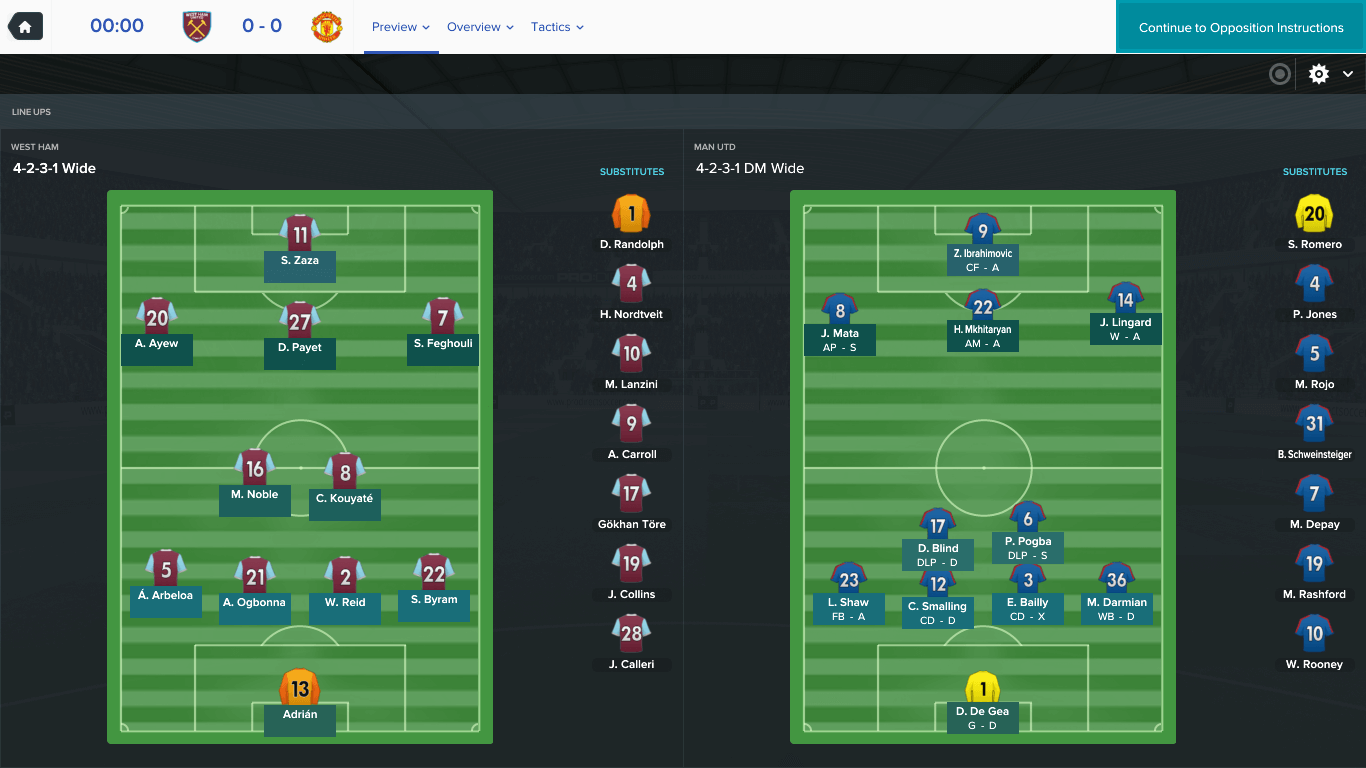 Hmmmmmm. Again not great. I’m definitely regretting the change for the attacking trio. Another quick-fire goal from Ibra in the 4th minute had me patting myself on the back for being a genius. A great run down the wing by Lingard before he squared it to Pogba, who immediately passed it through to the Swedish striker who finished with aplomb. Just after half time, we doubled our lead when a speculative long-range effort by Pogba was deflected into his own goal by Arbeloa. I was on top of the world. Now, this is where it all turned to pot. Immediately from the restart the move was started and finished by Kouyate, who found himself with far too much room within our own area. 10 minutes later it was made worse when Ayew was pushed in the back by Darmian when he was about to head home a Zaza cross. The referee had no hesitation to point to the spot and Mark Noble did what he does best and dispatched the penalty past De Gea. The match then turned into a bit of a stalemate as West Ham seemed happy to end the game with a draw now that they had drawn level and we seemed unable to break them down. It was another disappointing draw but at least this time we had scored! 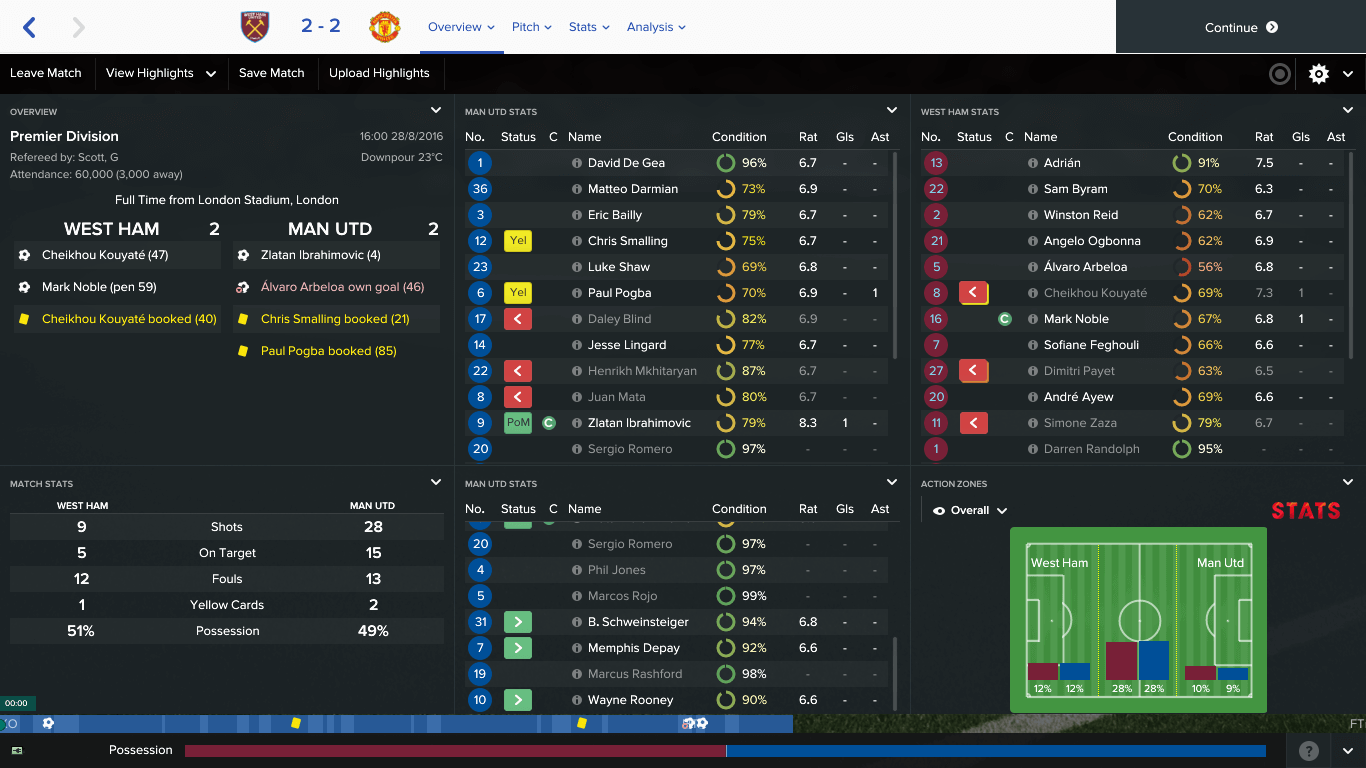 So our target of 3 wins and 9 points turned into 5 points, however, looking at the positives we were still unbeaten. We were missing one of our key players but his replacement had more than stepped up. It was also only the first month of the season, no trophies are won or lost in August. Onwards we march! 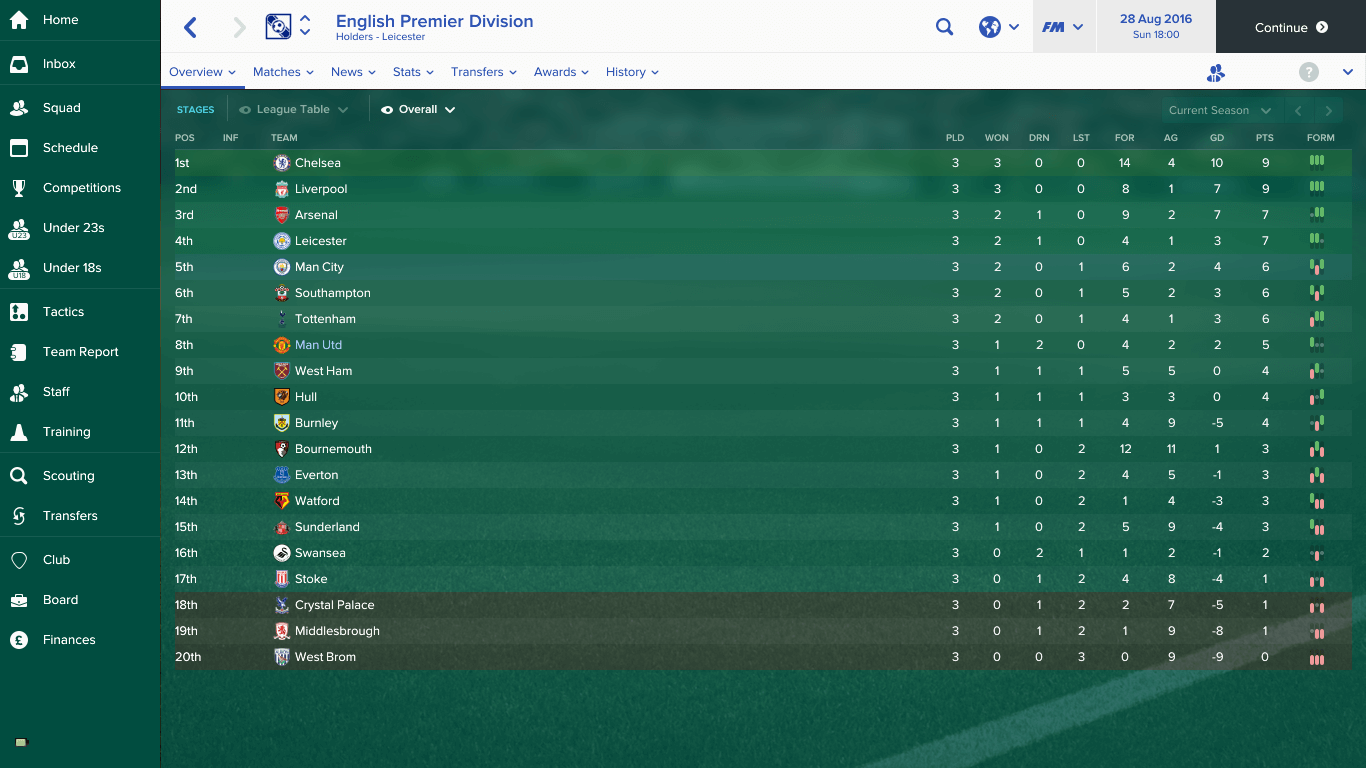 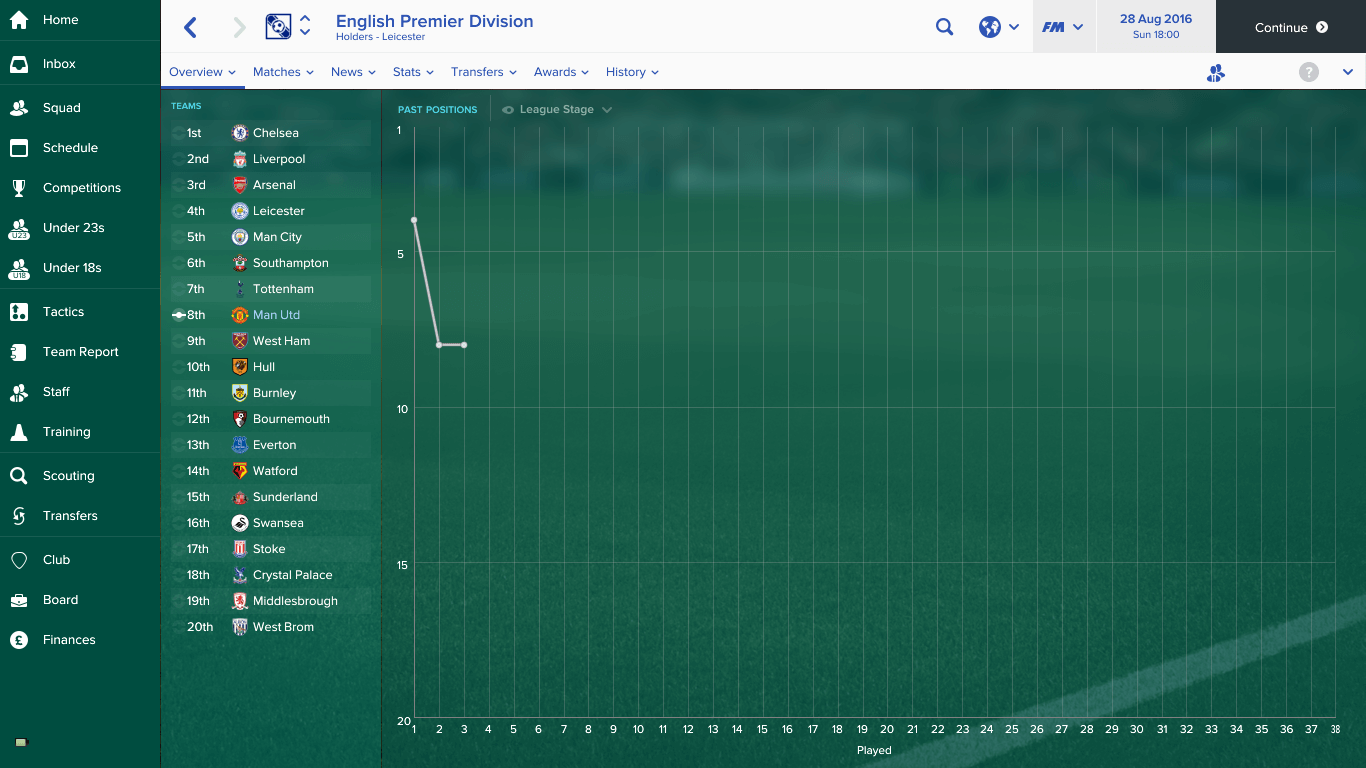 The board seem happy with August but are already making it clear, along with the fans, that 0-0 draws at home will not be tolerated. Trust me, something like this happens too often and I will sack myself before the board get a chance! 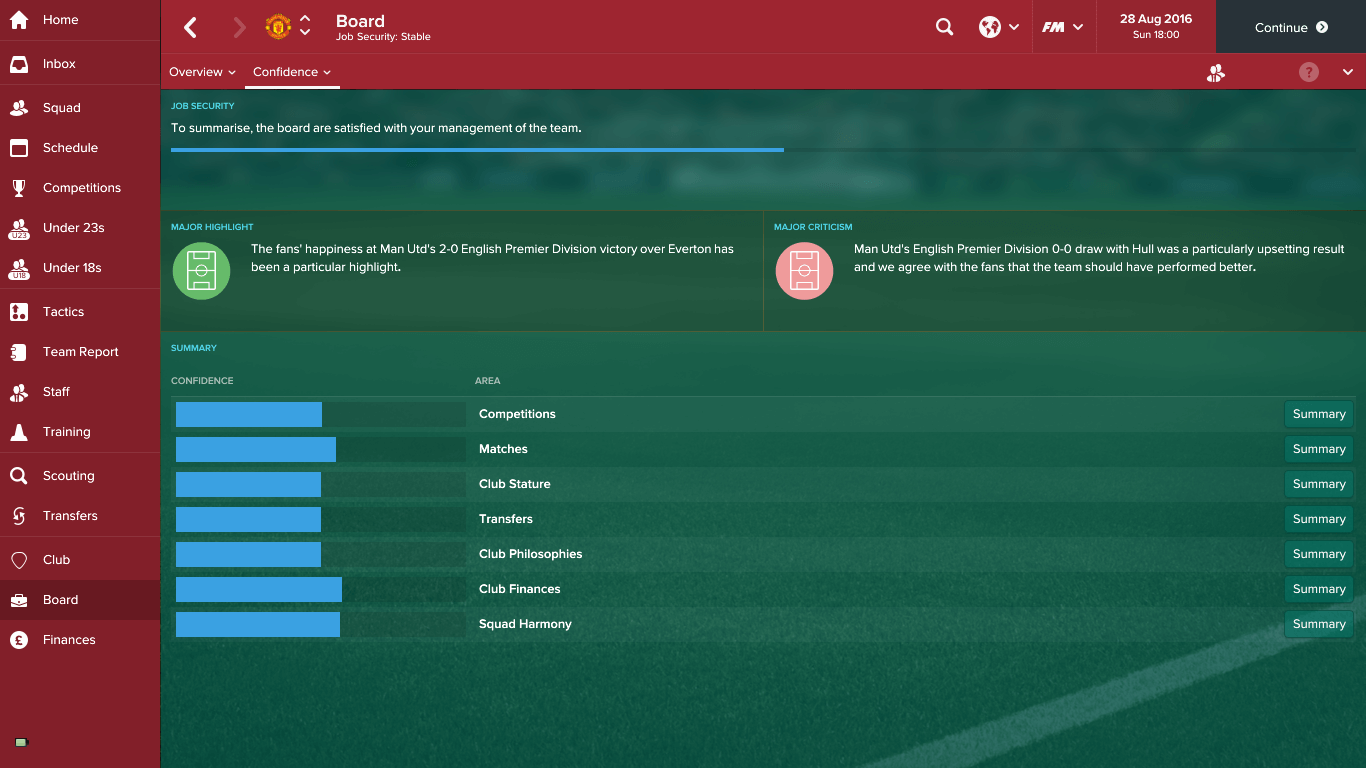 Next month sees some hard fixtures with home games against both Chelsea and Arsenal, away trip to Burnley and a couple of Champions League games there as well. If we are still unbeaten at the end of September, I will be very happy and will soon forget about our inability to score against Hull. Hopefully next month I will learn not to tinker after one disappointing result, must let the formation work its magic on its own.