After losing 4-0 at Stamford Bridge in October 2016, Mourinho knew he needed to change his tactics to be able to stop Chelsea winning again so easily. He modified his tactics for The FA Cup Quarter Finals tie when his plan was working perfectly until Herrera was sent off…..

He decided to replicate his plan against Chelsea but, this time, at Old Trafford. His idea was simple, consisting in 3 important rules:

1. Force Chelsea to play long balls from their back line.

2. Do not allow Hazard, Pedro and Diego Costa time and space to play. 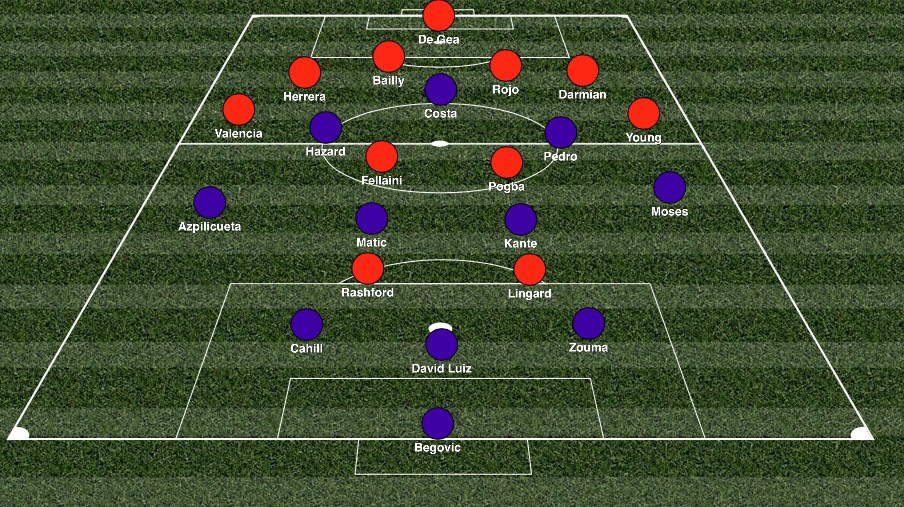 Manchester United’s players were capable of forcing Chelsea to play long balls from their back line by the constant pressure of Lingard and Rashford on Zouma and Cahill, at the same time, Valencia and Young were marking Azpilicueta and Moses very tight while Fellaini and Pogba were following Matic and Kante very closely.

Chelsea were not finding any spaces to play out from the back so the first part of Mourinho’s plan was working as expected. 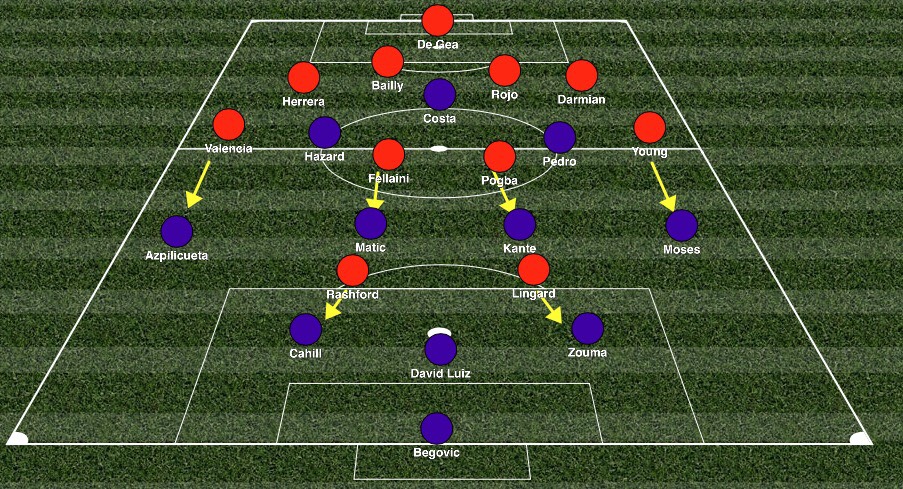 DO NOT ALLOW HAZARD, PEDRO AND DIEGO COSTA TIME AND SPACE TO PLAY

The second step on Mou’s plan to win against Chelsea was to stop the attacking trident formed by Hazard, Pedro and Diego Costa. To achieve this part of the plan, the instructions were very clear for Herrera, Darmian, Rojo and Bailly.

Darmian had to follow Pedro on the pitch, marking him very tight in order to prevent Pedro to receive with space to turn and use his pace.

Herrera, probably, had the hardest task on the pitch, man-marking Hazard who has had a great season so far. Herrera’s role was so important for Mourinho that after Ander made a pass, he needed to run immediately to be next to Hazard to avoid giving the Belgian any space at all. 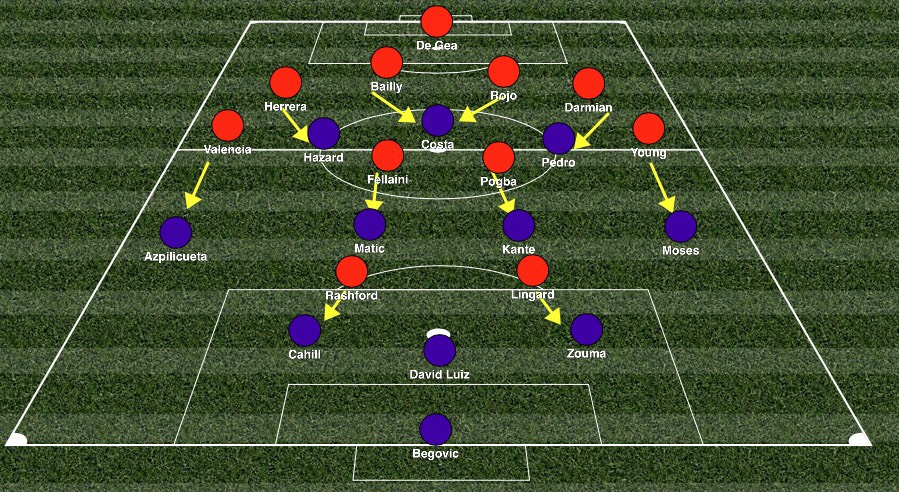 BREAK QUICKLY THROUGH RASHFORD AND LINGARD

Man Utd’s players knew how to stop Chelsea’s attack but they needed to find a way to score and Mourinho decided to leave Ibrahimovic on the bench, why? Easy answer, Mourinho wanted to exploit the spaces behind Chelsea’s back 3 line and he needed quick players capable of winning 1v1 or 1v2 situations against “Blues” defenders so he included Lingard and Rashford.

On the 7th minute, every step of Mou’s plan came together and Rashford scored the 1st goal after a great through pass by Ander Herrera.

After scoring a quick goal, Man Utd’s belief on the plan was greater than ever and Chelsea’s players were not finding any answers to Mourinho’s game plan. Conte only made a slight modification during the 1st half, after 20 minutes from kick off, he swapped Moses and Azpilicueta.

Chelsea were not able to create any chances and their first shot came on the 45th minute.

No changes for either team during half time and Man Utd scored again just 4 minutes after second half kick off by Herrera’s shot just inside box and the ball deflected on Zouma found the net.

Conte decided to change the dynamic of the match by introducing Cesc Fabregas as an extra player in the middle to try to break the 4v4 situation in the middle of the pitch so on the 54th minute Moses came off for Fabregas and the Chelsea’s formation changed as well. 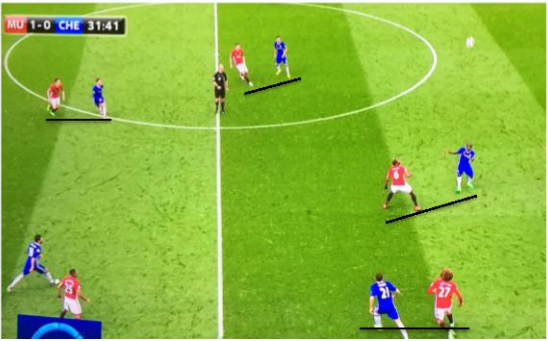 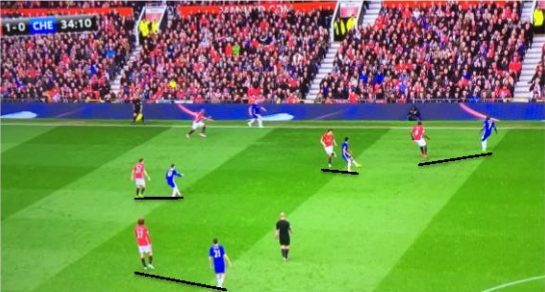 In the picture above notice another example of the 4v4 situation where “Red Devils” were marking the same players all over the pitch. 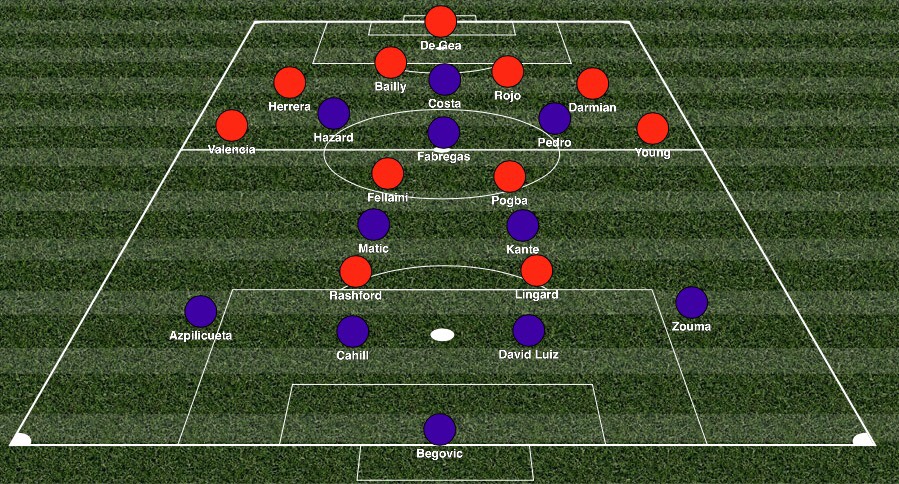 In the picture above, notice Chelsea’s new formation by introducing Fabregas in front of Kante and Matic.

Mourinho just waited 6 minutes after “Blues” first sub and he also changed ManU’s formation by introducing Carrick for Lingard. Carrick’s role was to counteract Chelsea’s overload in the middle by Fabregas playing in front of Kante and Matic so Conte’s idea was under ManU’s players control again. 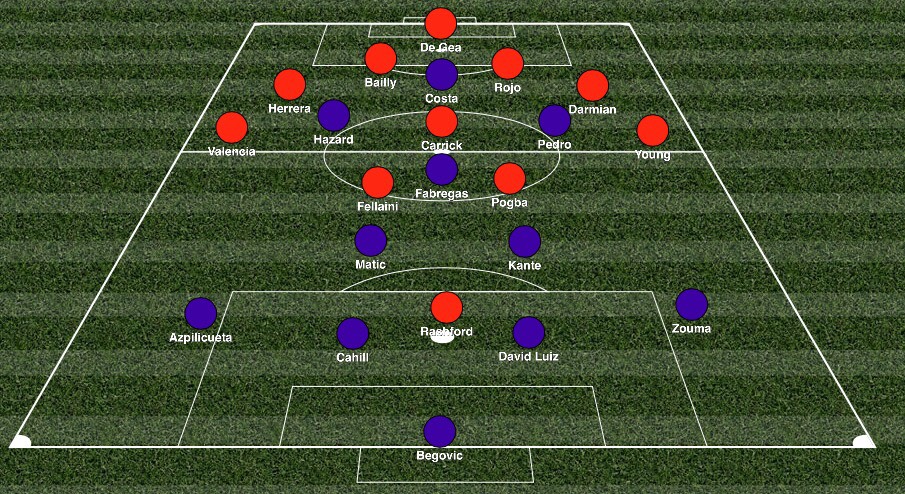 In the picture above, notice how Mourinho counteracted Fabregas creating an overload in the middle of the pitch.

On the 66th minute, Conte made his 2nd sub by changing Willian for Matic and Chelsea’s shape changed again which created no problems to Mourinho’s side who kept the same formation but Darmian stayed as LB to mark Willian, Carrick had more freedom to help the back line to mark Willian, Pedro or Costa depending on Chelsea’s players movement. 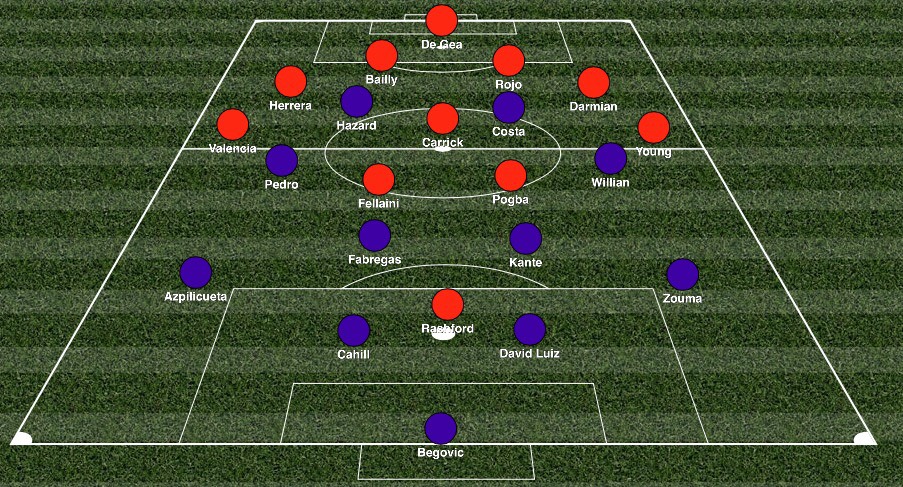 On the 72nd minute, Herrera got a yellow card and ManU’s roles were going to chance slightly. To avoid what happened at Stamford Bridge in March, Mourinho decided that Carrick was going to man-marked Hazard for the remaining of the match and Herrera stayed playing on the right side of Man Utd’s midfielder teaming up with Valencia to stop Pedro and Azpilicueta recurrent attacks on “Blues” left side of the pitch.

Conte made his final sub on the 83rd minute by bringing in Loftus-Cheek for Zouma to play again with a back 3 but nothing was going to change at Old Trafford. Ibrahimovic came in on the 82nd minute for Rashford who received a well deserved standing ovation. 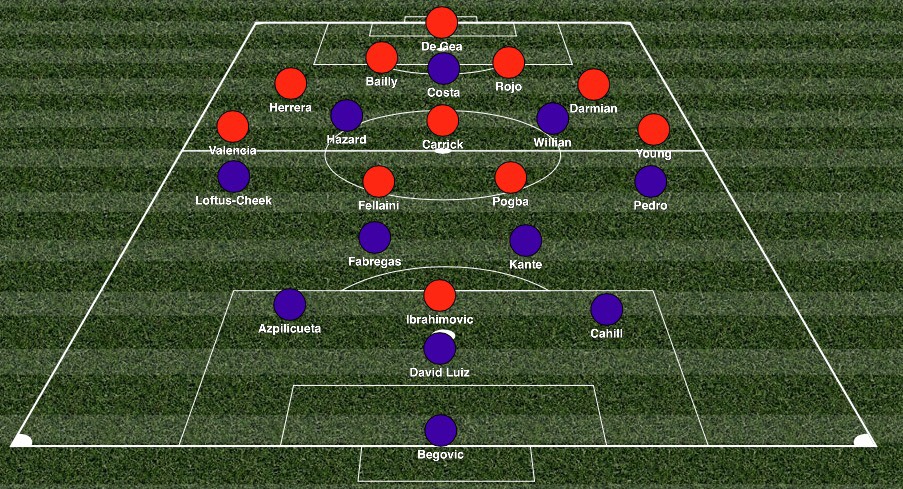 Mourinho’s game plan was executed perfectly by United’s players and a good example of how well they played is Ander Herrera’s post-match statement “I think it was almost perfect”. Chelsea left Old Trafford without a single shot on target and Tottenham is now 4 points away to try to steal the Premier League’s leadership.