Another a turbulent month in October and I was looking to push on three fronts in November, with games in the Europa League, Premier League as well as a League Cup quarter-final to look forward to. All the games were winnable, although trips to Anfield and St Marys could prove to be tricky.

The first game of this month would be a home game in the Europa League against Mainz. Now as you know, Mainz beat us at their place in the last game and revenge was needed. Especially seeing as a win could pretty much guarantee us progression to the First Knockout Round. I was impressed with how attacking Mainz started in the last game and would be sure to not let them have so many chances again. We would carry on with our home formation, however, slight tweaks would be made to make sure that we were not countered. A host of changes were made, as you know by now, however, Smalling would remain as centre back in the hope that he can keep things tight. Our subs bench is quite possibly one of the strongest subs benches that I have ever seen with Pogba, Martial and Mata waiting to come on and save the day. 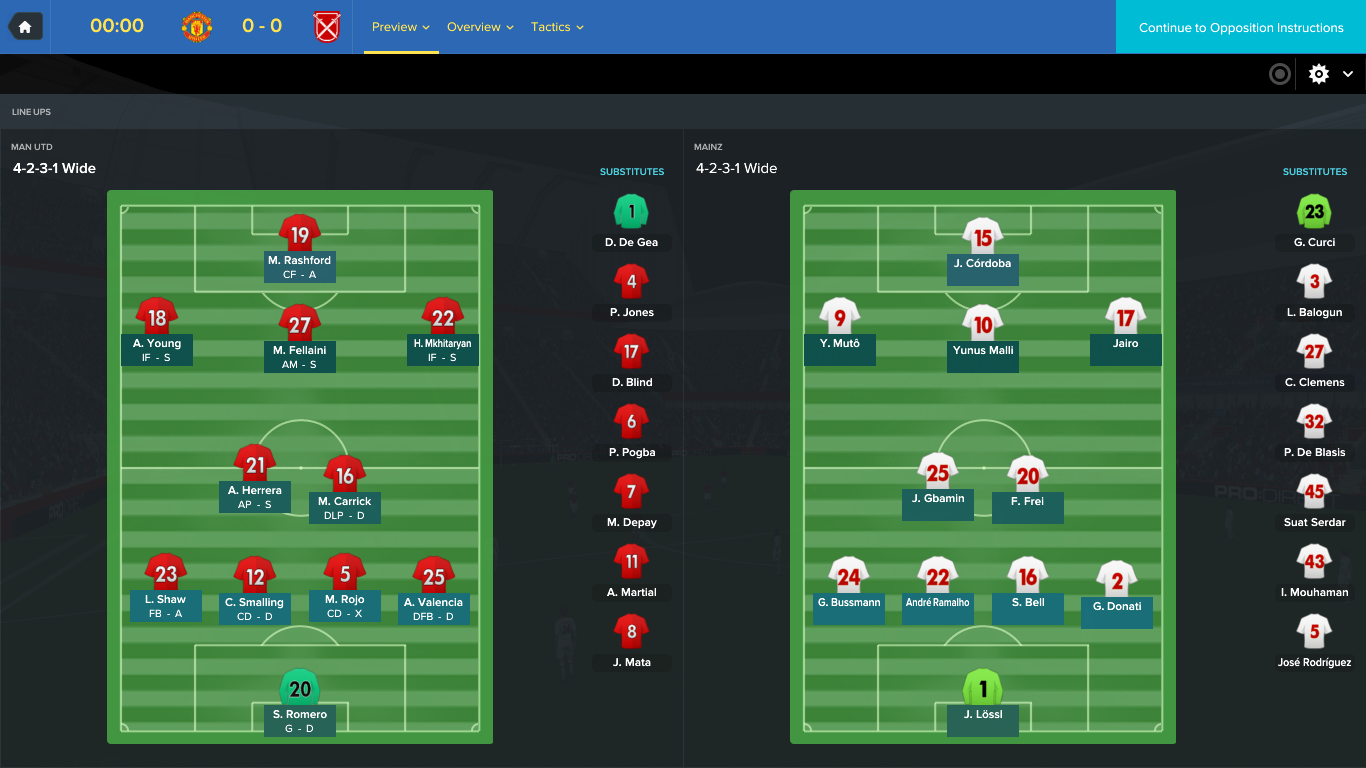 It started very poorly with Mainz taking the lead in the 14th minute with a free header at the back post. Rashford soon equalised and then put us ahead before 20 minutes were on the clock and I started to relax. We were running the game and coasting to half time before Mainz broke and equalised! We ended up being lucky to go into half time level! I tried not to panic when the boys came into the dressing room, I could almost feel them looking at me expecting a big idea. I had nothing. I decided to send them back out there with a simple ‘keep going and it will come’ but no one believed me. Well, no one that is apart from big Marouane Fellaini. He hadn’t played much this season but here he was, smashing in a shot from the edge of the box like he had been doing it week in, week out. I could’ve kissed the big man! Shortly afterwards, Martial increased our lead to 4-2 with a typically mazy run before a one-two with Fellaini ended with a smart finish past the opposition keeper. We saw the game out after this, a feat which was made easier when Mainz were reduced to 10 men due to a second yellow card for Donati. This ended the game as a contest at this point and meant that a point in the next game would guarantee progression to the next round! 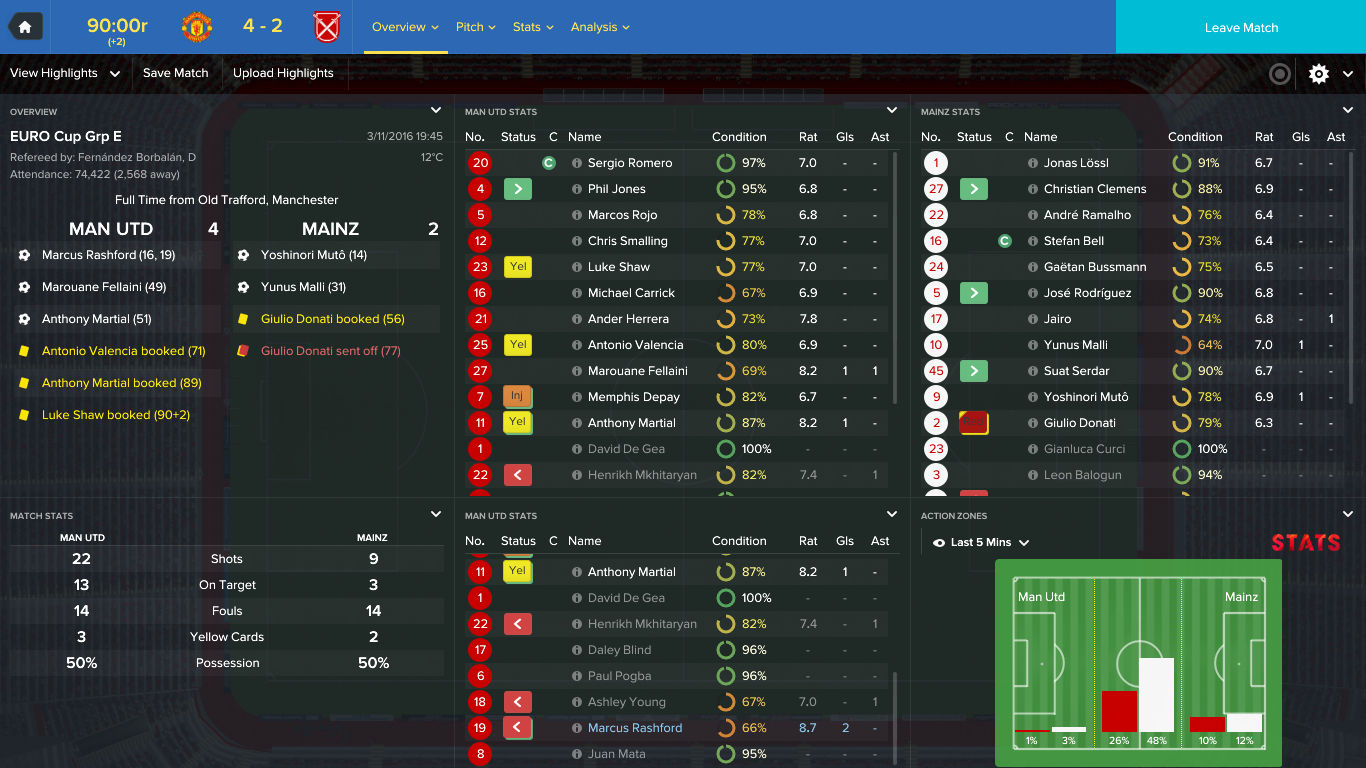 After the tough game against City in the last Premier League game, I was hoping for an easy game for us to build on, but a trip to Anfield to face unbeaten Liverpool was not going to be easy. We would revert to our strongest team, with two holding midfielders. Smalling picked up a knock in Europe and therefore Phil Jones would come in to cover. Liverpool lined up in a 4-1-2-2-1 formation with lots of pace up top. I hoped that we would be able to deal with this between Bailly and Jones. 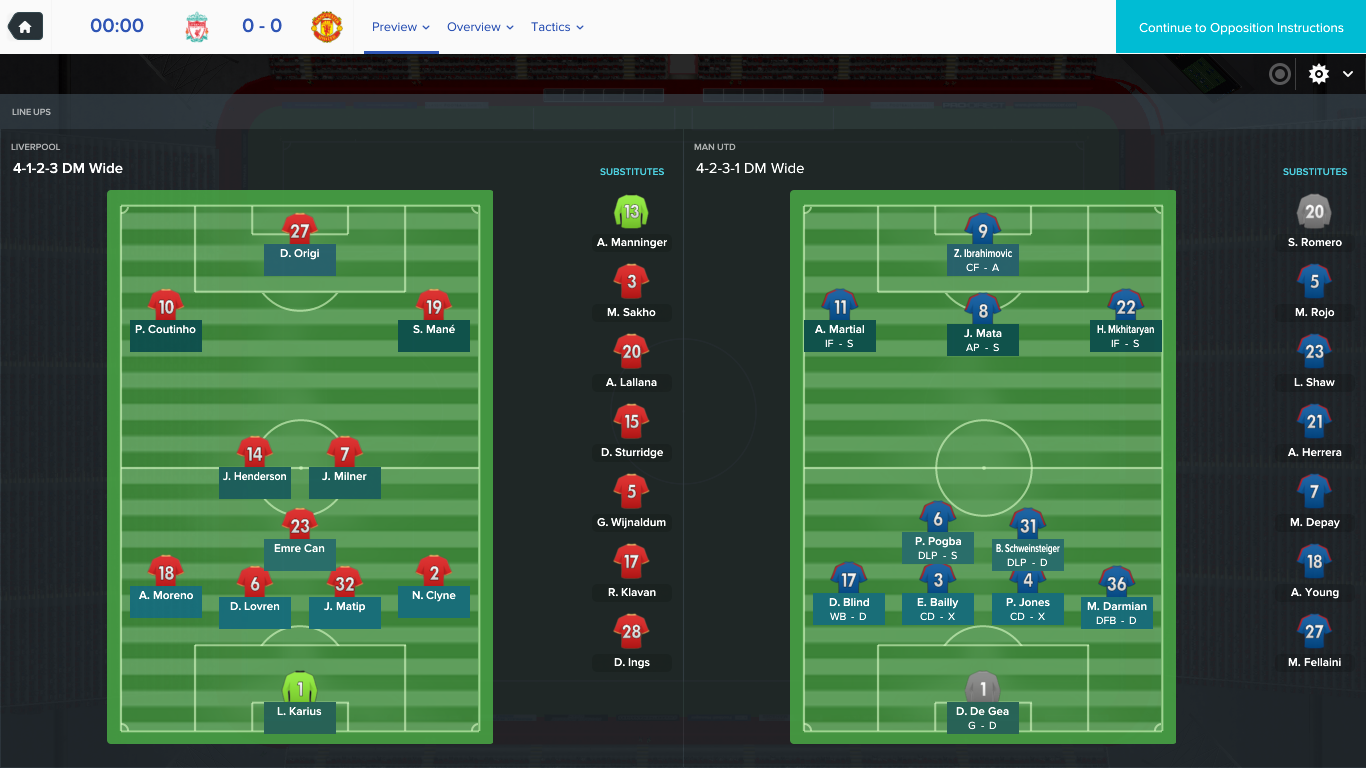 That was one tough game. For the first time this season, we struggled to have any shots at all. Our front 4 were completely seen to by the Liverpool defence and Can, their defensive midfielder. In fact, it was only our 3rd game of the season that we struggled to actually score. We also managed to hold Liverpool back and it looked like the game would end in a stalemate until I thought it would be a good idea to attack a bit more. I replaced Bastian with Ander Herrera and moved him and Pogba into the middle of midfield. Within 5 minutes, we were behind as Coutinho was allowed too much space to run at our defence and punished us. I tried to react with moving Martial up top alongside Ibra but it was too little too late was Liverpool placed everyone within their own half and saw out the game to improve their lead on us in the league. 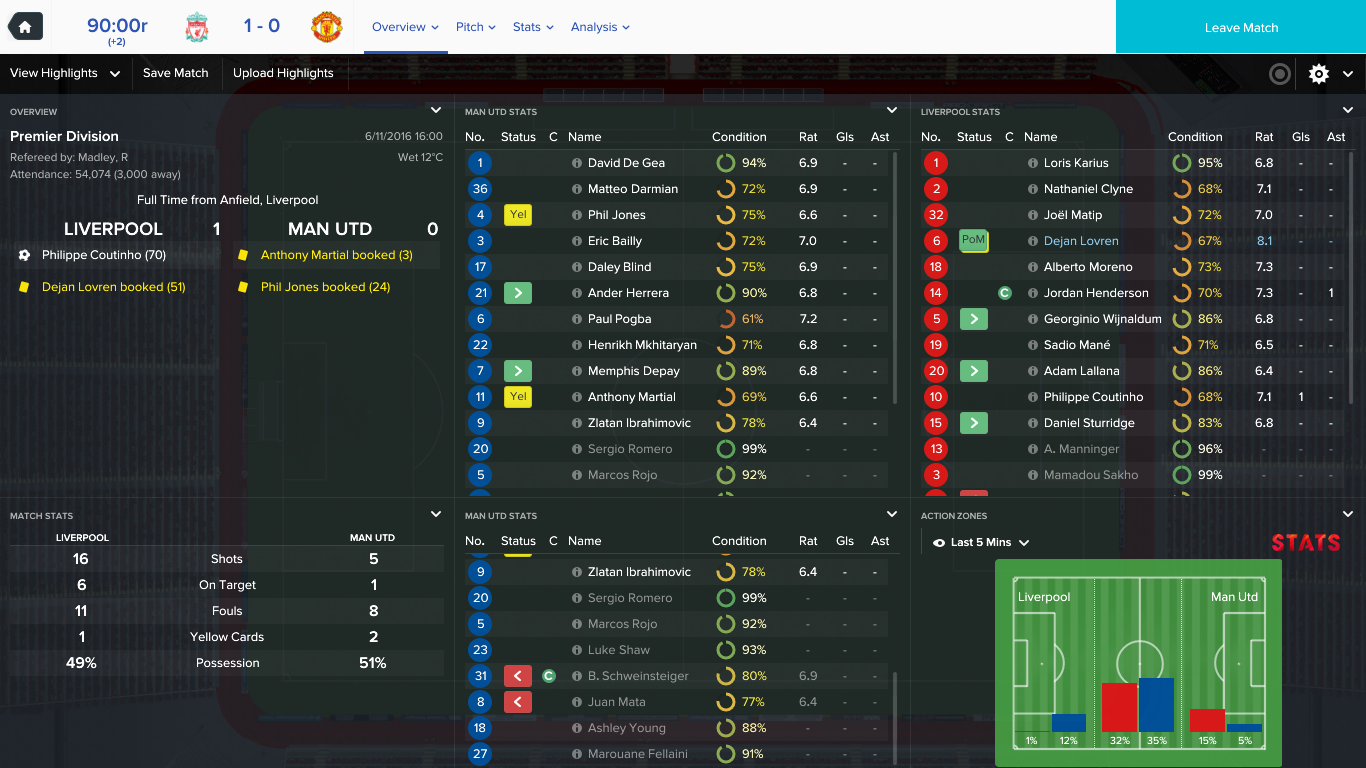 The next fixture was exactly what I thought we needed after the Liverpool game. A game that we were expected to win. We would go into this game with an attacking mentality and would hope to blow Sam Allardyce and his Crystal Palace team out of the water. 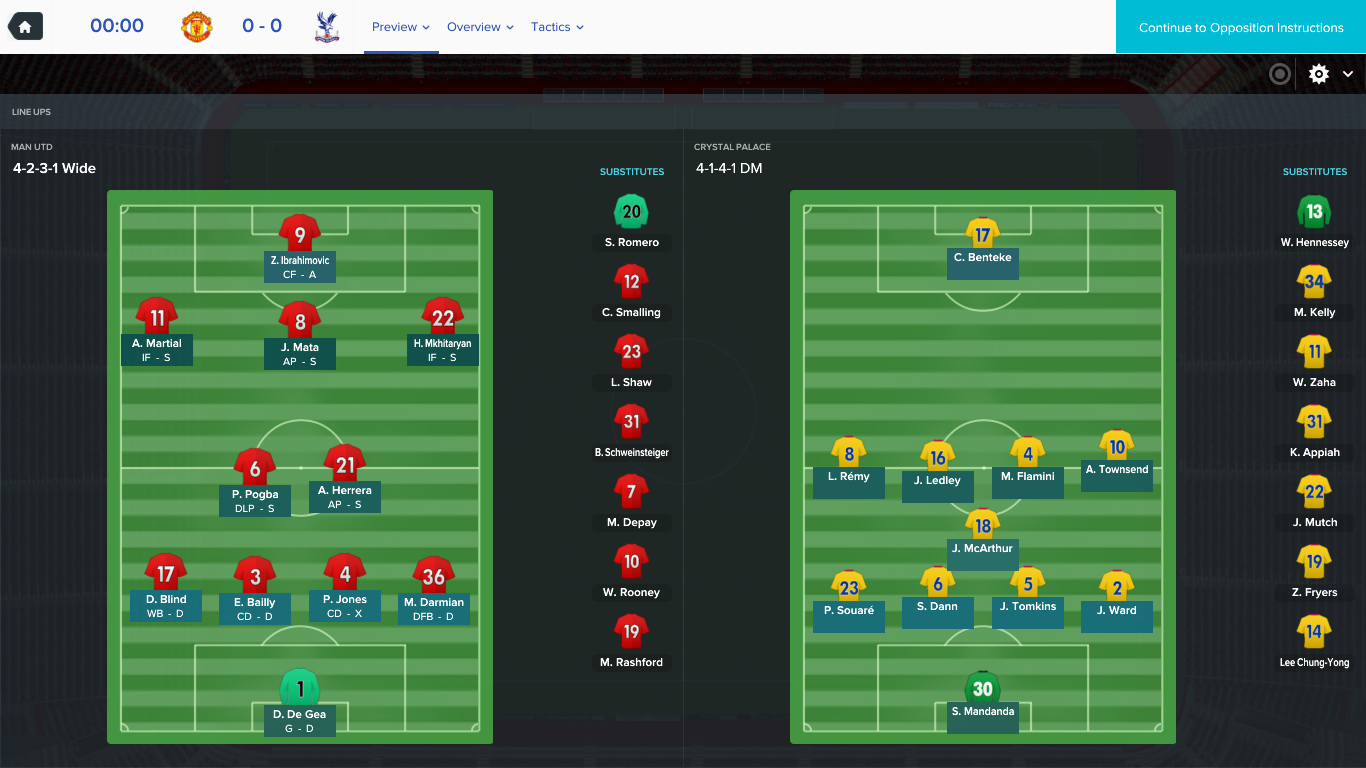 What the hell happened here?!

We were expected to blow them out of the water instead we were only able to perform a doggy paddle! Sam the B*stard went defensive from minute one, and we were only able to pepper their goal with shots from around 30 yards out. We struggled all game to actually break the team down and as we went more attacking, Palace grew in confidence. They eventually countered one of our attacks and played a long ball up to Christian Benteke, who was able to bring it down and place it past David De Gea before Jones and Bailly had even realised what had happened. Off came Martial and Ibra for Rashford and Depay to come on, but only the latter performed. Managing to draw us level within a couple of minutes of being on, going on to be crowned as Man of the Match even though he had only played around a fifth of it! That tells you all you need to know about the rest of the players on show. We kept pushing but Big Sam felt that a draw at Old Trafford was enough and went even more defensive. To tell you the truth, I don’t blame him one bit. He’ll be dining out for months on that one!

Our next game of this very poor month so far was a tough trip to Croatia. A draw would mean progression to the first knockout round and thought about playing some of the first team players. I thought that they could do with some minutes and maybe a confidence boosting win, but with a trip to Southampton around the corner, I could not afford to have tired players. 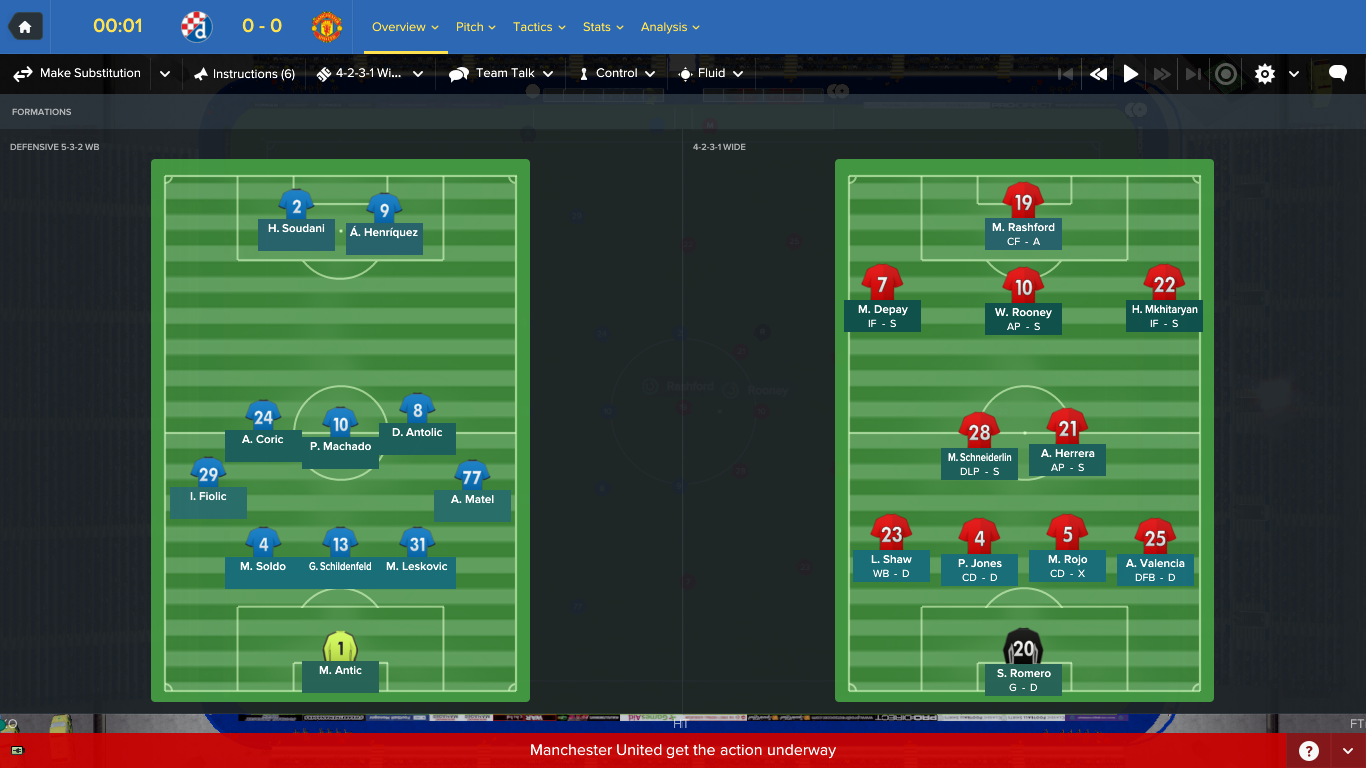 That was a lot more work than it needed to be. After his heroics against Palace, I had started Depay on the left but seriously regretted it within 10 minutes when he had already squandered 3 golden opportunities to put us ahead. After the short period, we ended up being on the back foot before half time. Although next to no chances were created, we allowed Dinamo to have far too much possession in the middle. Our defence was equal to it, as you can see by their player ratings. I switched it up at half time and retreated to 2 DMs but still with a ‘control’ mentality. We were still allowing Dinamo far too much possession. We finally managed to carve open the defence on the half mark when Rooney, playing just behind a front two of Rashford and substitute Martial, played in the former who beat the offside trap to round the goalie and place the ball into an empty net. After the goal, the game really petered out, we were happy to be leading and Dinamo were happy that it was only one goal down. The ball then just seemed to be played around the middle with no real chances being carved out. It was only 1-0 but again, WE WERE THROUGH TO THE FIRST KNOCKOUT ROUND. 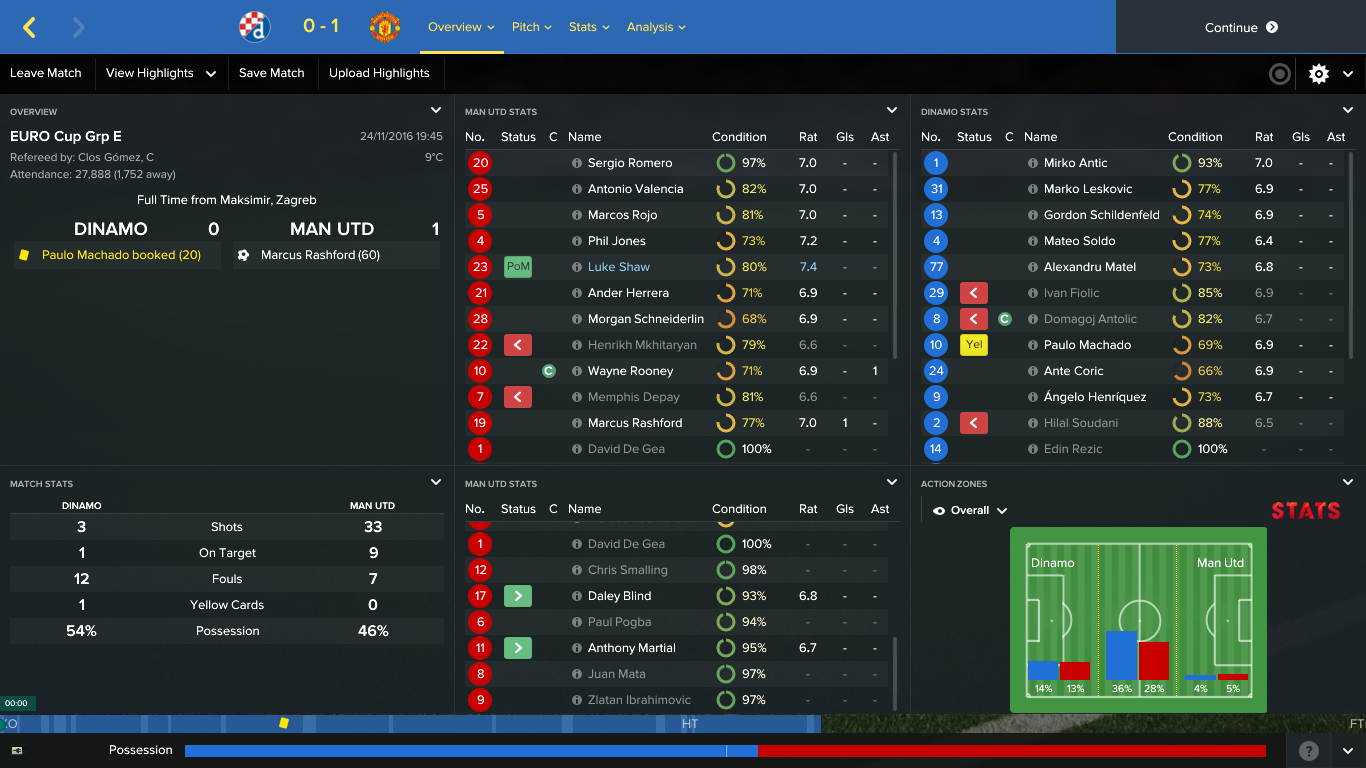 I shouldn’t have been so happy at the near qualification as looking at our group, we were expected to walk it. However, with the results in the League not being as good as hoped, I had to hold on to any positives that I could find. I’m pretty sure that our results in Europe were keeping me in a job right now. That could all change if we carry on losing in the domestic games. Our first game to put this right was a tough away trip to Southampton. Southampton had been in good form so far, in the top 10 and only a couple of good results away from the European places. Their main problem was the lack of goals that they had scored. 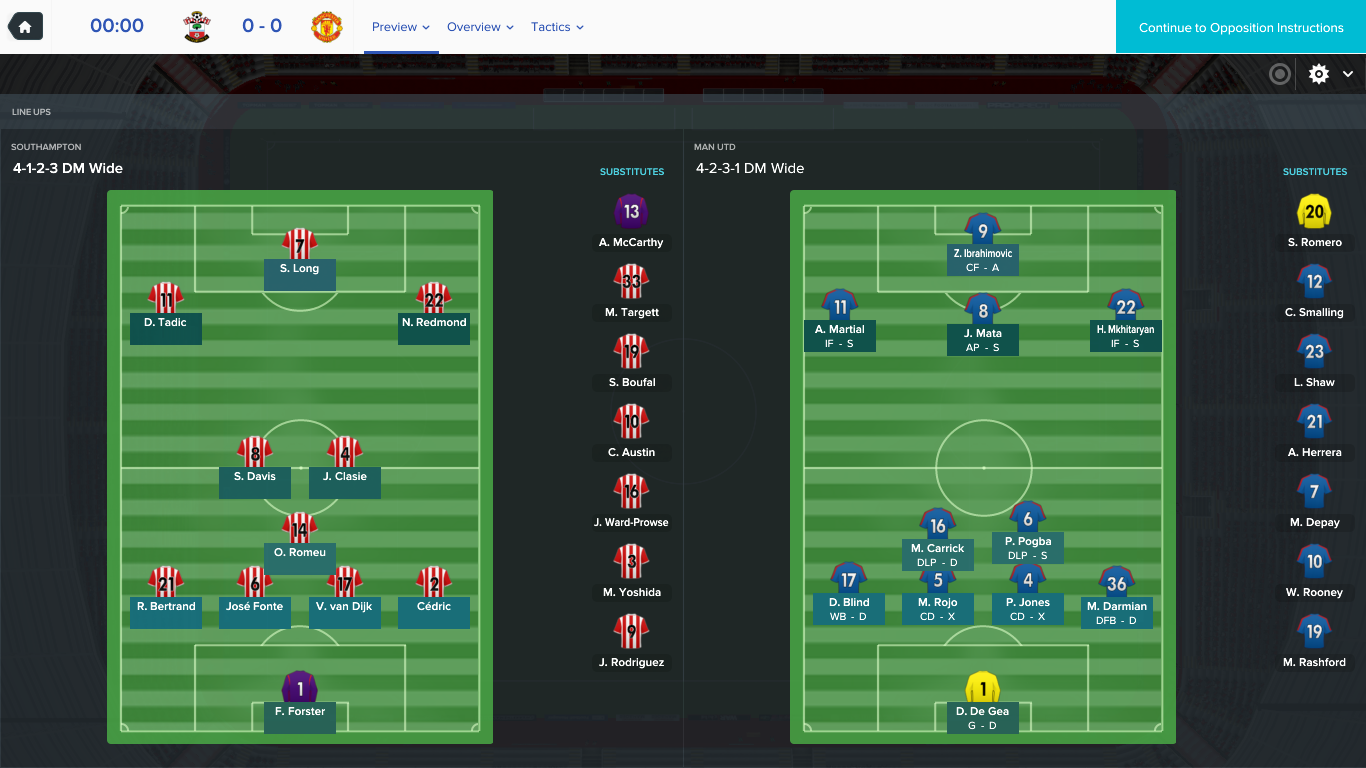 We went down like a building that had been marked for demolition: without a fight, and fairly quickly. Southampton could have been ahead within the early stages of the game if it hadn’t been for a good double save from De Gea. I may have to start the defence that has been playing in Europe as they looked assured and impenetrable during the week. This supposed ‘first choice’ defence looked weak and about as useful as a chocolate teapot. True, Southampton didn’t take the lead until late on, but they looked like scoring the whole game through. We only really created chances once they went ahead. By then it was too late and we were picked off on the counter after pretty much every attack. I decided not to talk to the press after the game, I prefer to sulk quietly after a loss like this. This might have been a mistake though as Rui Faria decided to tell the national press that we had played well and not deserved to lose! I’ll have some of what you are on Rui! Either that or you were watching the wrong game! 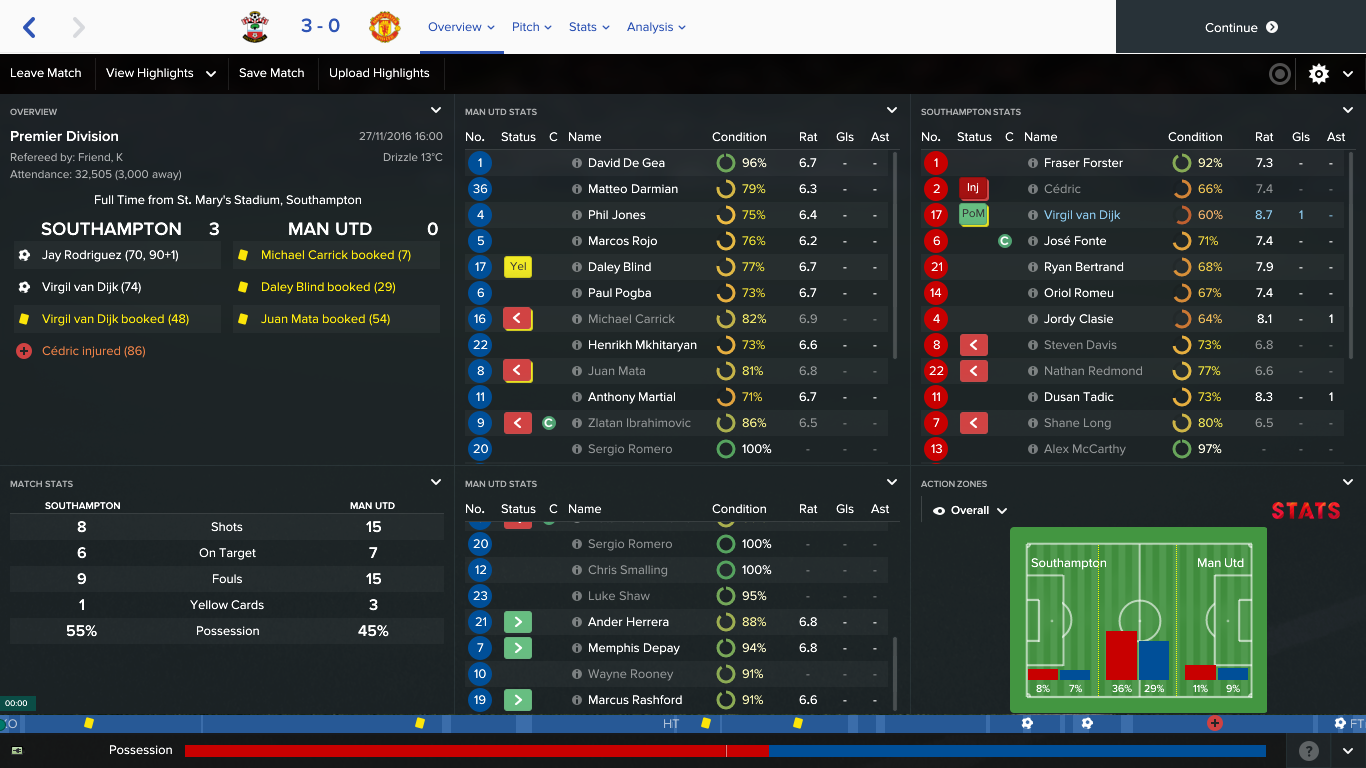 Our next game was our quarter final fixture against Leeds. We had been given the best possible draw in the competition, with every other team left being a Premier League team. Especially with Man City and Chelsea being drawn against each other, this cup was the perfect opportunity for another piece of silverware this season and must be seized upon to keep the board away from me. I decided to keep a couple of first team players in the squad that I felt needed a confidence boost, namely De Gea, Rojo, Bastian and Martial. I hoped that good performances for them would mean for improved performances in the league. 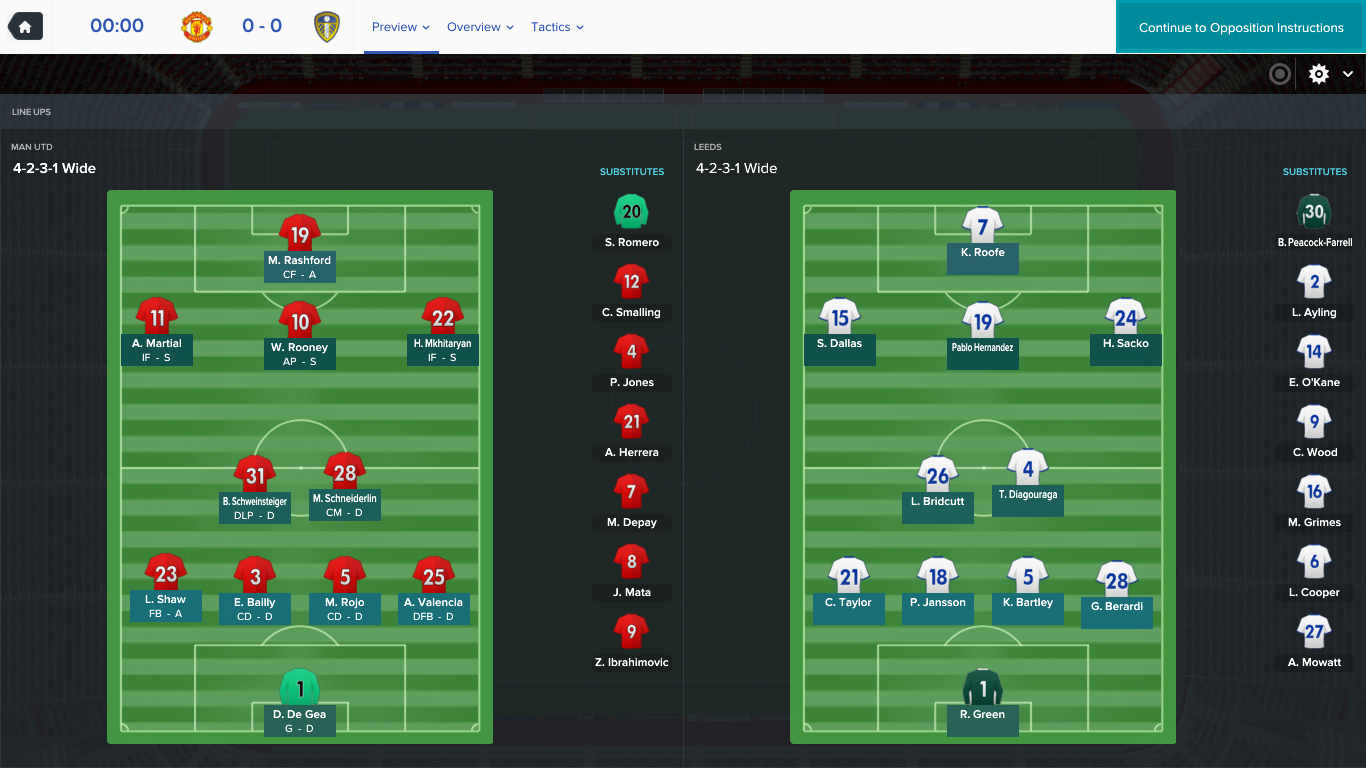 It started terribly! We were 1-0 down within 8 minutes and I could feel the fans turning on me. Surely if we were knocked out against Leeds then this could be the end of my managerial tenure. Fortunately, this would be the only time that Leeds would leave their half in this first half and we managed to create plenty of chances to test the Championship side. We finally drew level with a corner was headed in by Marcos Rojo shortly before half time. I read the riot act to the lads at half time as we should be beating a Championship side very comfortably. They reacted immediately after half time when Martial broke his recent duck by scoring a long range finish which was curled into the corner. Rooney then squandered a penalty which he crashed against the crossbar, with Robert Green just left standing. I was so angry that I immediately subbed him off. We pushed forward wanting to score more and increase our lead but Leeds retreated further and further into their own half. We only managed to increase our lead when
Ander Herrera showed Rooney how it was done with a coolly placed penalty into the bottom right corner. A 3-1 win was the least that we deserved, and it could and should’ve been more. Although, I will take whatever win I came at the moment. 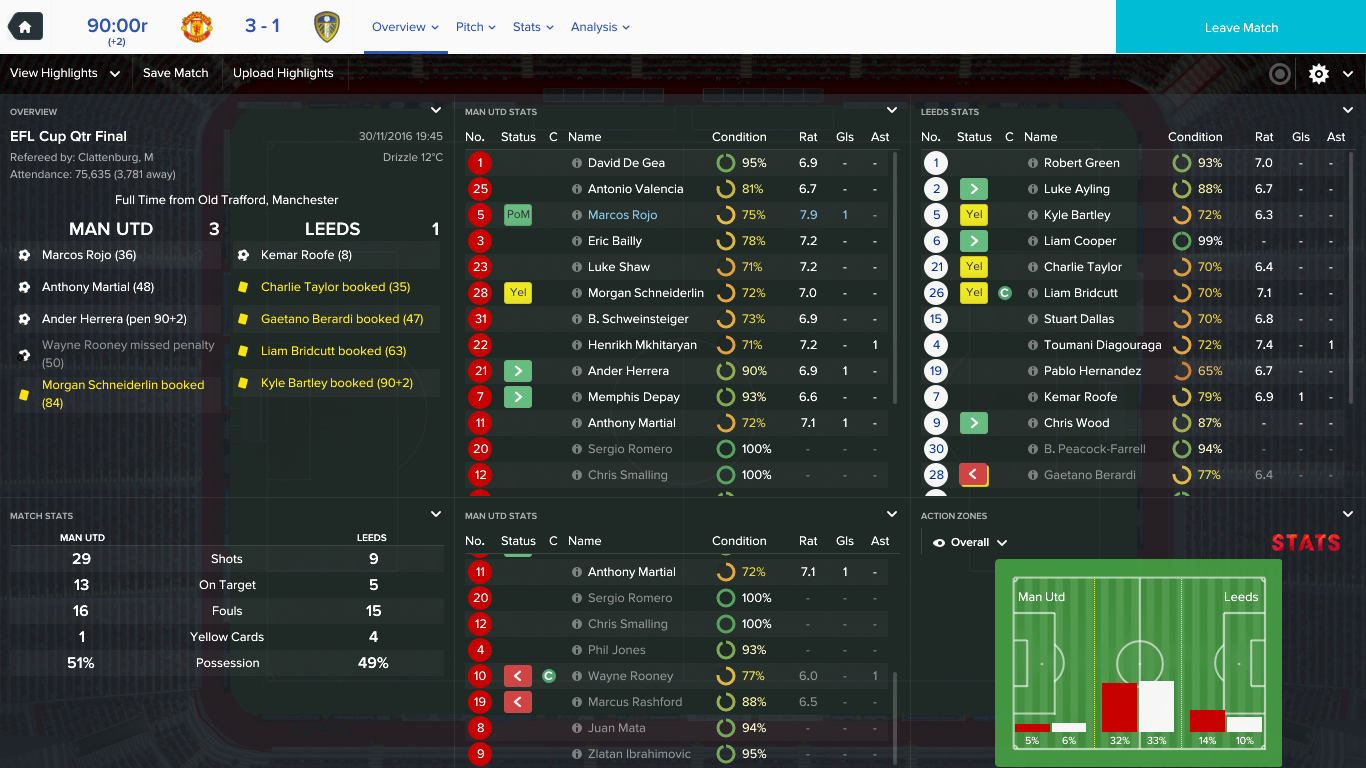 At the end of this terrible month, the board still seem content currently. Their anger around our Premier League performances are outweighed by their pleasure at still being in the hunt for both the Europa League and the League Cup. We were still in 6th place, but the chasing pack have come closer and another month like this will see us crashing down the league and leave me down the jobcentre looking for a new role. (EDITOR: In real life as well as in Football Manager) Maybe a change in formation could see our fortunes upturned.