Every derby is special, it’s a match that every player wants to win, no matter their position in the Premier League but this one had an extra meaning, the battle to qualify to the Champions League!!!

Manchester United’s starting formation was 1-4-2-3-1 with Mkhitaryan playing as “9”but his position on the pitch was not going to last long because just after 6 minutes the Armenian and Rashford swapped positions. 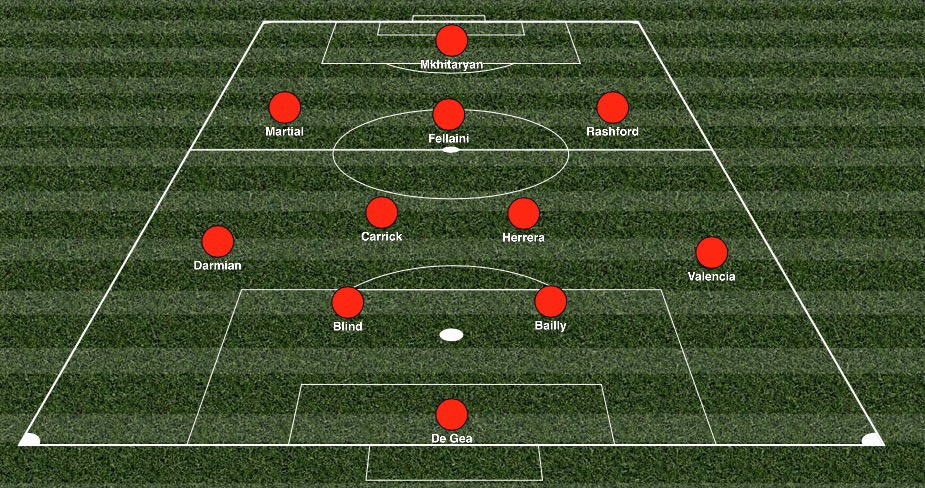 Manchester City’s starting formation was very similar to United’s but the main difference was in the position of the City’s CMs. Toure and Fernandinho were playing together but Fernandinho was going to act more like a deep pivot and Toure had more freedom to join the attack. 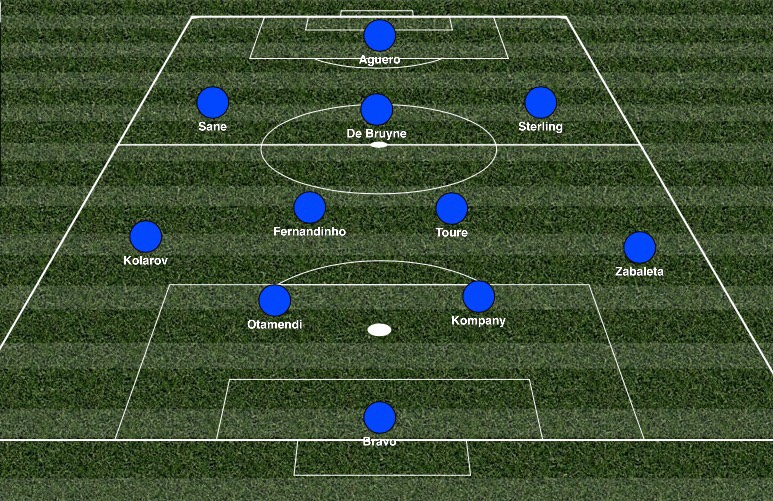 Man Utd’s players were not pressing high on the pitch, minimal pressing on Otamendi, Kompany or Fernandinho. Tight marking was on immediately when City’s players were in possession on United’s half forming a back line of 4 defenders and a midfielders line of 5, leaving Rashford up front ready to break quickly. 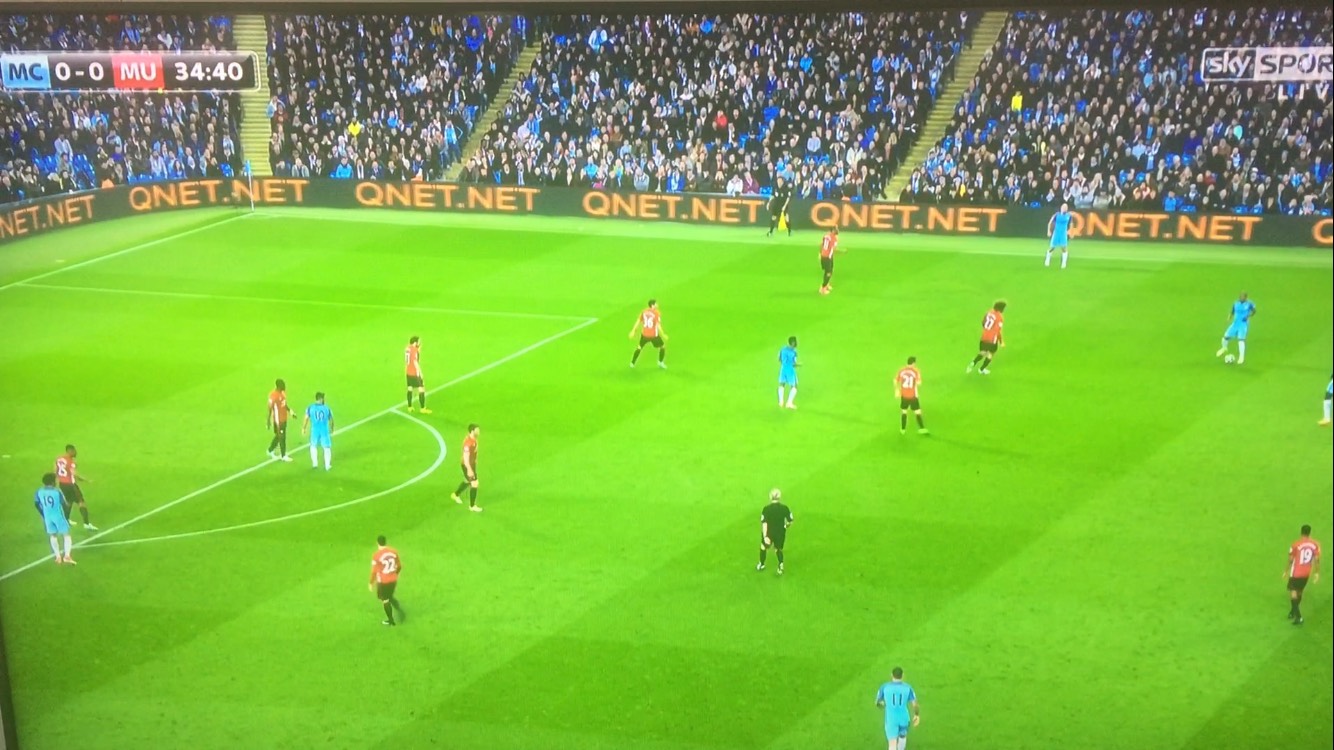 In the picture above, notice a back line formed by Darmian, Blind, Bailly and Valencia plus a midfield line formed by Martial, Fellaini, Carrick, Herrera and Mkhitaryan.

In the video above, notice Herrera’s pass into channel for Rashford. The idea behind this defensive shape was to avoid spaces behind the back 4 for Aguero, Sane or Sterling to exploit and Man Utd’s players did a brilliant job making Aguero to drop in to find pockets between defenders and midfielders to receive the ball, keeping him away from the 18 yard box De Bruyne was constantly marked by Herrera or Carrick so the Belgian needed to move to wide areas to receive the ball to try to create combination plays.

Due to Man Utd’s overload in central areas of the pitch, City started to play to wide areas but every time either Sterling or Sane received the ball, they were surrounded by 2, 3 or even 4 “Red Devils” because Martial was supporting Darmian on the left and Mkhitaryan was teaming up with Valencia on the right. 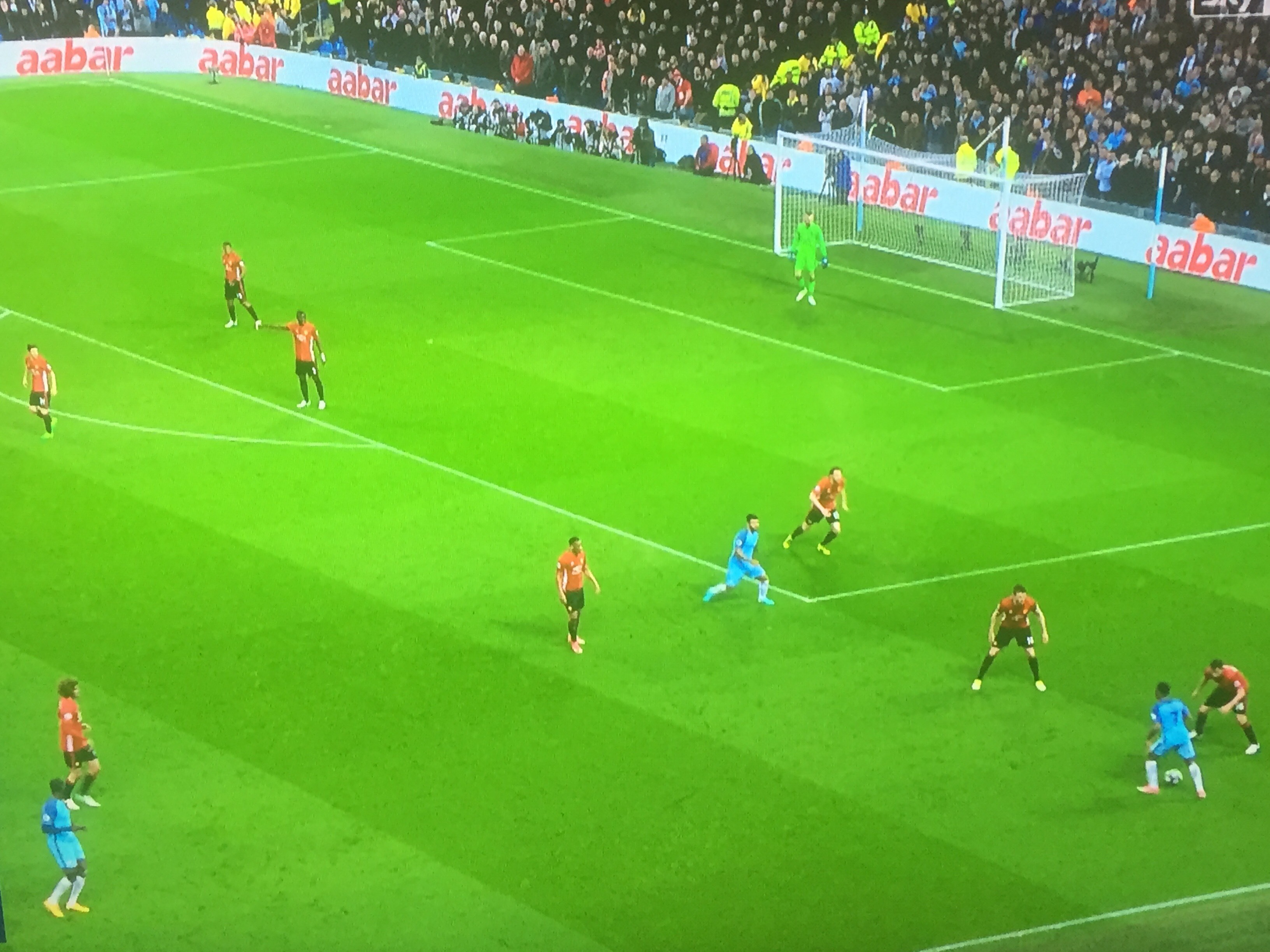 In the picture above, notice how ManUtd’s players were teaming up to stop Man City in wide areas. Man Utd only created 2 clear chances, both during the first half. The first one came after Bravo making a mistake from a cross but Mkhitaryan couldn’t hurt Man City. On the second occasion, Herrera was not going to be able to hit the target after losing his marker and heading the ball inside the 6 yard box. Man Utd couldn’t create more chances due to the lack of capacity from their midfielders to find Rashford when he was making good runs to break City’s back line.

In the video above, notice Rashford making a run into space but Fellaini’s bad decision to pass to Martial.

Fellaini lost his head completely on the 83rd minute after fouling Aguero twice in less than 30 seconds but especially by heading the Argentinian’s head after conceding the second foul. Immediately after Fellaini sent off, Mourinho replaced Mkhitaryan for Fosu-Mensah and Guardiola made his final sub by changing Sterling for Gabriel Jesus. Last 13 minutes (6 additional minutes) of the match were in complete control of Manchester City’s players and Gabriel Jesus was going to score but the goal was disallowed by a clear offside. Man Utd resigned to attack for the remaining of the match to keep a clean sheet and leave the Etihad with one point but more importantly to stay alive in the top 4 battle.

Manchester United’s defensive plan worked perfectly by keeping another clean sheet against a very offensive team but the lack of chances created have to improve if they really want to finish in Champions League positions this season.