One leg down, one more to go.

This past Thursday evening, Manchester United left Spain with a content 1-0 win against Celta Vigo in the Europa League semi-final. Despite the recent injury spell, putting doubts on whether they would make it into the top four in the Premier League, their performance was better than expected. Although it may have left some key players (once again) fatigued and started off looking like it would be an infamous goalless draw, United takes a, nonetheless, important away goal back to Old Trafford in one weeks time.

United started off with a very familiar formation being a 4-4-3, but was very fluid about it and constantly went in and out of a diamond formation. Celta Vigo went more with a 4-2-3-1, and more or less kept the shape throughout the game.

Midfielders like Paul Pogba, Marouane Fellaini, and Ander Herrera, were given a very free forming role allowing one to push up, one to stay in the middle and one to play deep. A similar style was shown within the front three consisting of; Marcus Rashford who would stay central or slightly drift wide, Jesse Lingard who would stay wide, change sides or drift centrally, and Henrikh Mkhitaryan who was regularly dropping back.

During United’s attacking plays was when the change of shape would occur. Players such as, Fellaini, would move up to Celta’s final third, planting himself in the box for his characteristic aerial threatening role. 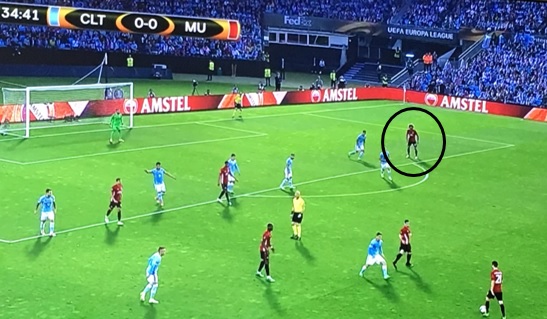 In this case, once the play had been developed, Celta’s defense mistakenly sat back, allowed United to take a bit of time on the ball, moving around to create a chance. Fellaini is seen ahead of his counterparts, Pogba and Herrera, allowing him to be an option for United in the air.

Here, we see an example of position change. As Rashford floated out wide, Lingard moved towards the middle, while Fellaini once again occupied the opposite side, waiting for an aerial ball or to add additional bodies into the 18 yard box. During the time, Mhkitaryan stayed wide and Pogba stayed low, leaving the option of playing the in a directional change, allowing for a possible reset in positioning. 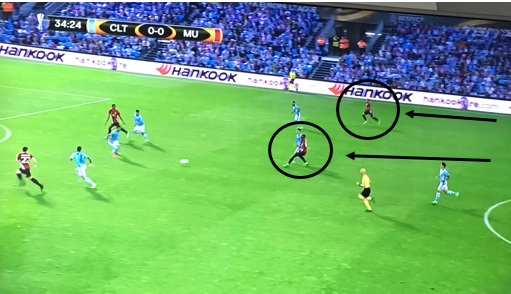 This time, we see the likes of Pogba moving forward when Fellaini had dropped back, and Mkhitaryan playing up as Lingard had fallen back. Thus creating a through-ball pass and creating a shot on goal. This constant interchange between the wingers and the midfield left Celta Vigo’s defense unaware of sides, or players that would be involved in the development of attack.

Although these tactics used to build the attack didn’t cause their game winning goal, it did create a lot of chances in the Celta’s final third.

In defense, solidity was important. United did a great job of keeping the back line strong and clustered against the Spanish side. Along with the back four, Ander Herrera played as a deep-sitting defending midfielder. Occasionally occupying the wide side of the defense, allowing Antonio Valencia to move into a forward positioning. 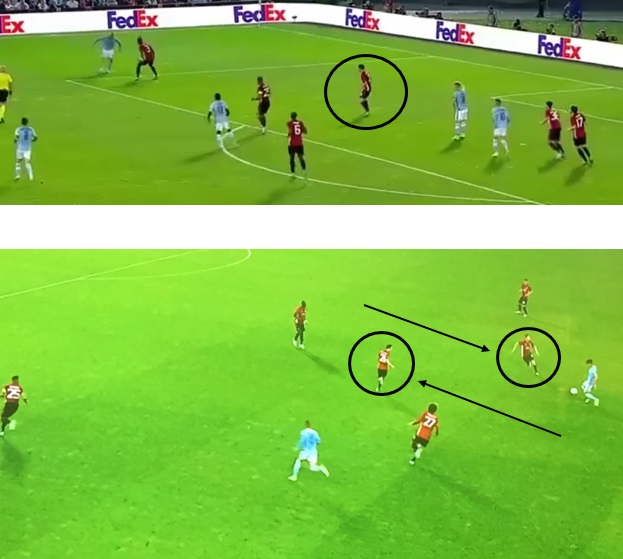 In the images above, we see Herrera filled the void in the middle of the defense, as Eric Bailly had stepped up to pressure the man on the ball. Having an extra man sitting just above the back line plays a huge part in both attack and defense. When it comes to picking out the perfect player for this, there is no mistake in Ander Herrera. If someone wanted to step up, he was there to take up any unoccupied space. With Herrera allowing himself to fall back when needed, it leaves some relief within his teammates knowing his defensive capabilities. This situation occurred any time United were in the position to defend. Whether it was covering more men in the box, or simply filling a gap prohibiting movement from Celta Vigo.

Once again, Marcus Rashford’s poise and smarts had come up big to save United from missing out on an away fixture chance. As Rashford was making a brilliant run forward, a defender clashed into him causing him to drop just outside the 18 yard box. Having freekick specialist on the pitch at the time like Pogba or Herrera, it was none other than Rashford who appeared to be standing over the ball. With this, he took his chance beautifully. Slashing the ball across the goalie, instead of up and over the wall, causing the keeper to misjudge his leap as the ball hit the inside mesh of the net. An absolutely beautifully kick taken by an unexpected (freekick) hero.

This game, yet again, left United with some questionable injuries. Warming up on the sidelines were a number of players looking to be used for tactical purposes, such as, Juan Mata and Wayne Rooney, but never saw the pitch. Reason being players like Rashford, had left the field seeming to have an aggravating injury, as well as, Ashley Young who had initially come on to replace Mkhitaryan, only to come off just 11 minutes later with a possible grievance. To come on for Young was Chris Smalling, who started off by filling the missing midfield spot but eventually dropped back into his comfort zone, securing the Red’s win.

Even though it may have looked like Manchester United should have had at least 2-3 goals to their name, it was an important away win. The defense was solid, the attacking plays left viewers clenching their fists in anticipation, but the overall performance will suffice in bringing the 2nd leg back home. The tie is not over, nor is it for certain. There is lots to be done and with focus, intelligence and composure, United are in the cards to seeing the final in Stockholm.