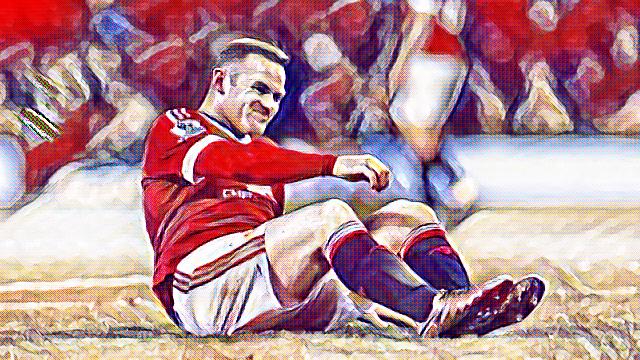 He made his debut and scored his first goal for Everton by the time he was just 16 years old. Then, five days before his 17th birthday in 2002, Wayne Rooney curled an incredible, long range effort in off the underside of the crossbar and put a stop to Arsenal’s unbeaten run of 30 games. The question was asked: how good could this boy be? Sir Alex Ferguson had thoughts of his own and sealed a £25.6 million move for the then 18-year-old – a record for a player under the age of 20. Rooney began his legacy with a Champions League hat-trick against Fenerbahce on his Manchester United debut.

He stands clear as Manchester United’s all-time top scorer. 252 goals scored in 553 games. He is the Premier League’s second highest all-time scorer with 197 goals. He has captained his club and country, played in every position imaginable, and won every domestic top flight trophy that England has to offer. At the height of his powers, he placed fifth in the FIFA Balloon D’Or in 2011. In his early career, he won two consecutive PFA Young Player of the Year awards in 2005 and 2006. His outstanding 2009-2010 performance in the aftermath of Cristiano Ronaldo’s exodus to Real Madrid saw him named PFA Players’ Player of the Year, PFA Fans’ Player of the Year, Football Writers’ Player of the Year, and Premier League Player of the Season. 26 goals in 32 league matches and 34 goals in 44 matches in all competitions put fresh air between Rooney and his Premier League rivals.

His return of goals and assists has been so brilliant over the years that there is an argument that his transfer fee is the best value for money signing in football league history. This is especially telling when considering Chelsea signed Shaun Wright-Phillips for £21 million with a return of 4 goals in 82 matches, Manchester City signed Robinho for £32.5 million for 14 goals in 41 matches, and Liverpool’s £35 million on Andy Carroll returned 11 goals in 58 games.

In a time where players committed to one club has dwindled, Rooney stands up as a phenomenon. He has the sixth highest number of appearances for the club and as the highest all-time scorer – only Ryan Giggs can compare in the modern era with 168. In the goal scoring records between Rooney, in first, and Giggs, in seventh, stand United greats, such as Bobby Charlton, Denis Law, Dennis Viollet and George Best. These players are spoken about as some of the greatest of their time – and Rooney’s achievements have surpassed them.

Wayne Rooney exists in a time of media oversaturation and has been targeted by journalists over the years. At times used as a scapegoat for collective failings and blamed for not ever reaching his full potential. He is painted with the same fictional villainous brush that every England team since 1966 has experienced. The expectation to win a major tournament every two years and ultimately blamed for failing. For Rooney, many simply expected him to become the world’s best player, and for the simple fact he hasn’t, he was never forgiven. For some, it’s almost too easy to dislike him.

But when opinions are stripped away and rational brains engage in analysis of the hard numbers – his achievements are outstanding.

50 years ago, Bobby Charlton was named the world’s best player. He is one of only four Englishmen to earn the title. He was undeniably brilliant – and the numbers back this up. 249 goals in 758 Manchester United matches and 49 goals in 106 England appearances. An astonishing figure for a midfielder. It took Rooney 212 fewer games to reach Charlton’s United total of 249 and their international strike rate is almost identical. We must resist the urge to feel disappointment with Rooney and recognise that his feats of goalscoring for club and country will stand unmatched for decades. This in itself is a rare and resounding peak of footballing achievement.

Rooney has won the Premier League five times, the Community Shield four times, the League Cup three times, and the Champions League, FIFA Club World Cup, and the FA Cup once. There are few British players who are more decorated, and those who are, are older United players who spent longer under the dominant reign of Sir Alex Ferguson.

In the long list of top scorers in English football league history, the only players in the modern game to have scored more than Rooney’s 197 goals in 456 games are Alan Shearer, Ian Rush and Tony Cottee. Shearer scored 260 in 441, Rush scored 232 in 515, and Cottee scored 214 in 548. Shearer stands out with a superior strike rate of 0.51 goals per game. But Rush’s strike rate of 0.45 goals per game is only marginally better than Rooney’s 0.43 goals per game. And Ian Rush is remembered as one of the game’s greatest goal scorers. In fact, if Rooney had scored only 9 more goals his strike rate would be identical to Rush’s.

Unlike Rooney, players like Shearer, Rush and Cottee were out and out centre forwards. In his 14 seasons at Blackburn Rovers and Newcastle United, Shearer was the club’s top scorer in 13 campaigns. Rooney has been Manchester United’s top scorer in 6 out of 12 seasons. He played in the same teams as Ruud van Nistelrooy, Cristiano Ronaldo, Dimitar Berbatov and Robin van Persie – and his strike rate still stands up in comparison to others.

He is a versatile talent, able to play as an out and out centre-forward, or just off the main striker, sometimes out wide to give counter-attacking prowess, or even to ‘do a job’ and protect the flank defensively. In recent months he has dropped deeper in field and started to develop a Paul Scholes control of the game. Although he has a long way to go to so dominantly command the tempo of games, with the same regularity of Scholes.

He has offered so much more than just goals. His 101 league assists are the fourth highest total in Premier League history and the most for any striker. His assist rate is better than Steven Gerrard and almost matches Frank Lampard. Rooney has scored or assisted 298 goals in 456 Premier League matches. This means he either scores or assists one goal every 1.5 matches. He has been an incredible team player for Manchester United.

He is the most capped outfield England player and all-time leading scorer. Again surpassing Bobby Charlton’s scoring record that stood since 1970. His England career came to life at Euro 2004 when he was thrilling to watch. Only Paul Gascoigne and Michael Owen have offered England fans the same level of excitement in the modern era. Even a talent as exciting as Dele Alli does not offer the same spark that a young Wayne Rooney once did.