Mourinho warned about resting some players during the weekend after facing Celta Vigo for the Europa League semifinals; 6 chances in the starting line up compared to the match against Swansea (Rashford, Lingard, Young, Bailly, Blind and Shaw).

Manchester United started formation was a 1-4-2-3-1, seeing the League debut for Tuanzebe forming the back line of 4 along Smalling, Phil Jones and Darmian. On the other side of the pitch, Arsenal, with a 1-3-4-3 formation were ready for the clash.

Mourinho’s game plan was very similar to the one delivered against Chelsea few weeks ago, very organised defensively and trying to hurt “Gunners” back line with quick breaks by having Martial up front.

Tuanzebe was in charge of marking Alexis Sanchez on the right while Darmian was marking Ozil on the left. Mkhitaryan defensive role was to stop Oxlade-Chamberlain and Mata had the same role on the right against Gibbs.

Oxlade-Chamberlain and Gibbs were pushing forward constantly on wide channels supporting Sanchez and Ozil in attacking duties; that’s why, at some moments, Manchester United had a line of 6 defenders to try to stop Arsenal attacking plays. 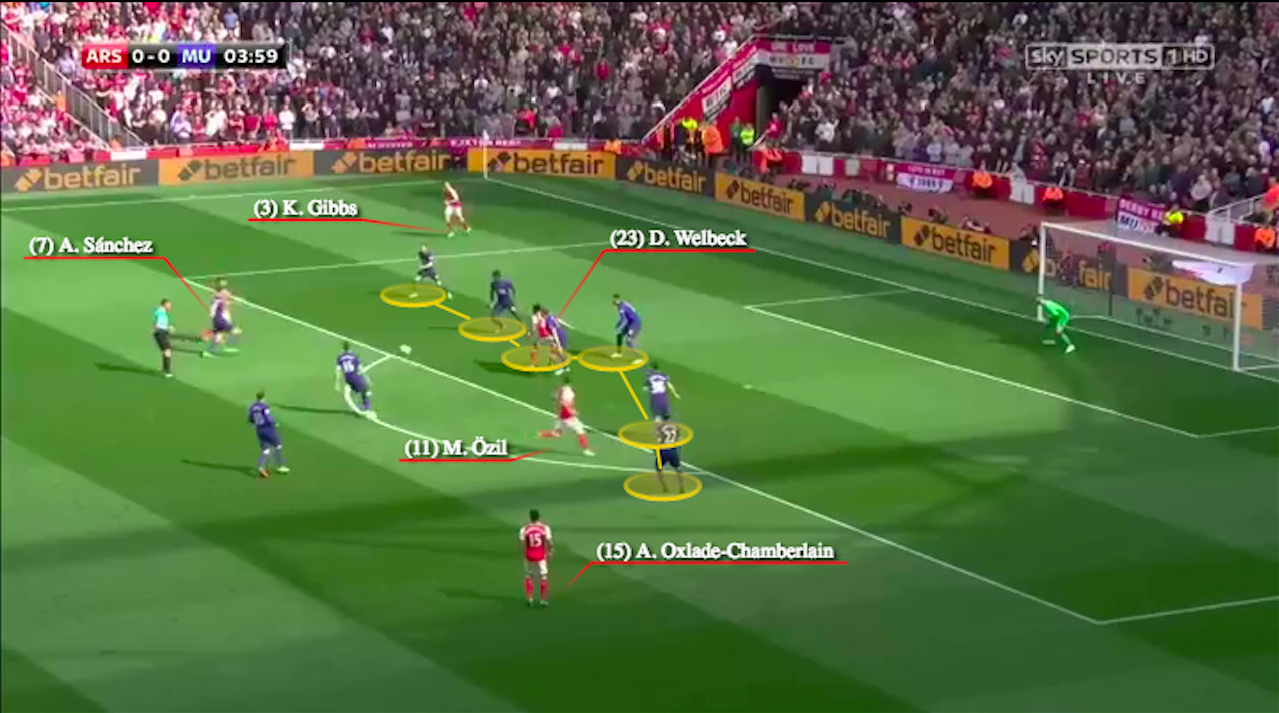 Arsenal best chances during the 1st half came when Alexis Sanchez dropped in and move to central areas of the pitch away from Tuanzebe while Ramsey was making good runs behind “Red Devils” back line to receive through passes from the Chilean but none of these chances found the net.

“Red Devils” best chances happened during the first half. The first one arrived just after 5 minutes from KO when after a great combination play between Darmian, Mkhitaryan and Rooney, Martial was going to threat Cech without success.

The second chance was going to come after a mistake by Holding playing a square pass to the 18 yard box which found Rooney on 1v1 situation agaist Cech but the Czech was brilliant one more time; watching Mata in great frustration because of his position inside the box but Rooney preferred to finish than pass to the Spanish who was in a better position.

Both Manchester United full backs task for the match was very clear…. DEFEND!!! Darmian and Tuanzebe were more worried about Ozil and Sanchez than supporting his team mates during attacking plays which helped the “Gunners” a lot due to the lack of width from Manchester United when in possession on Arsenal half. 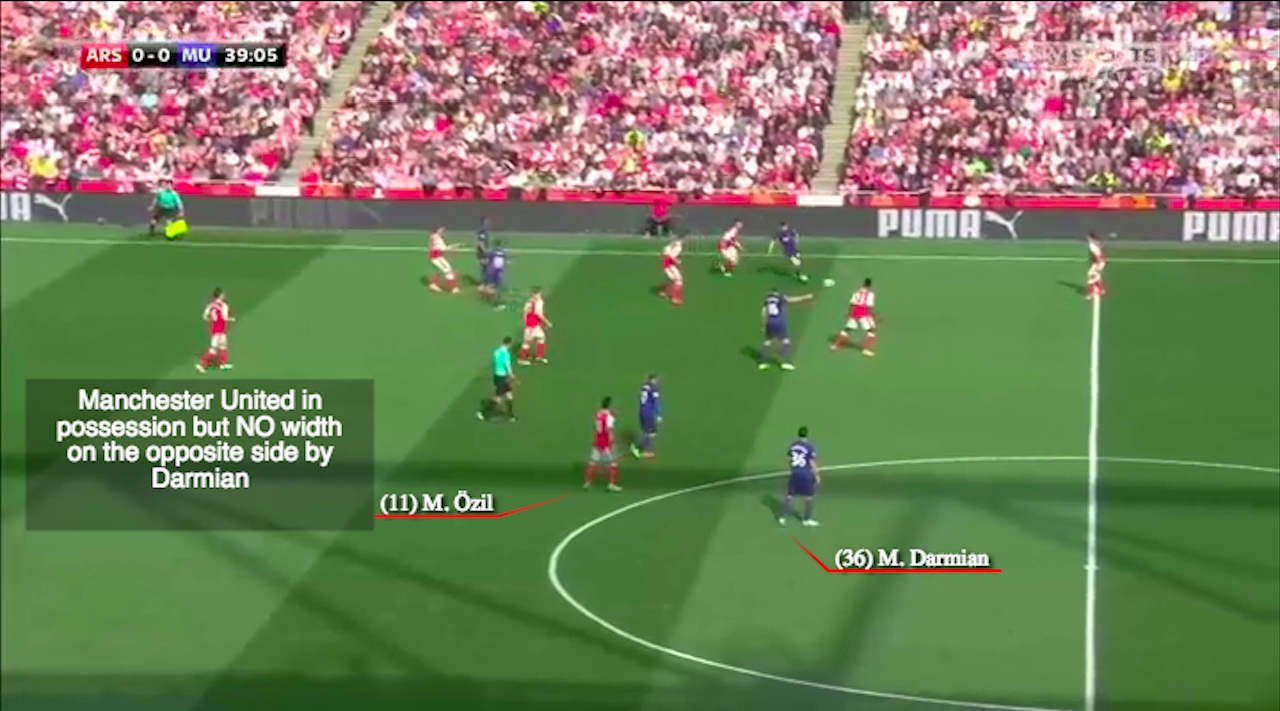 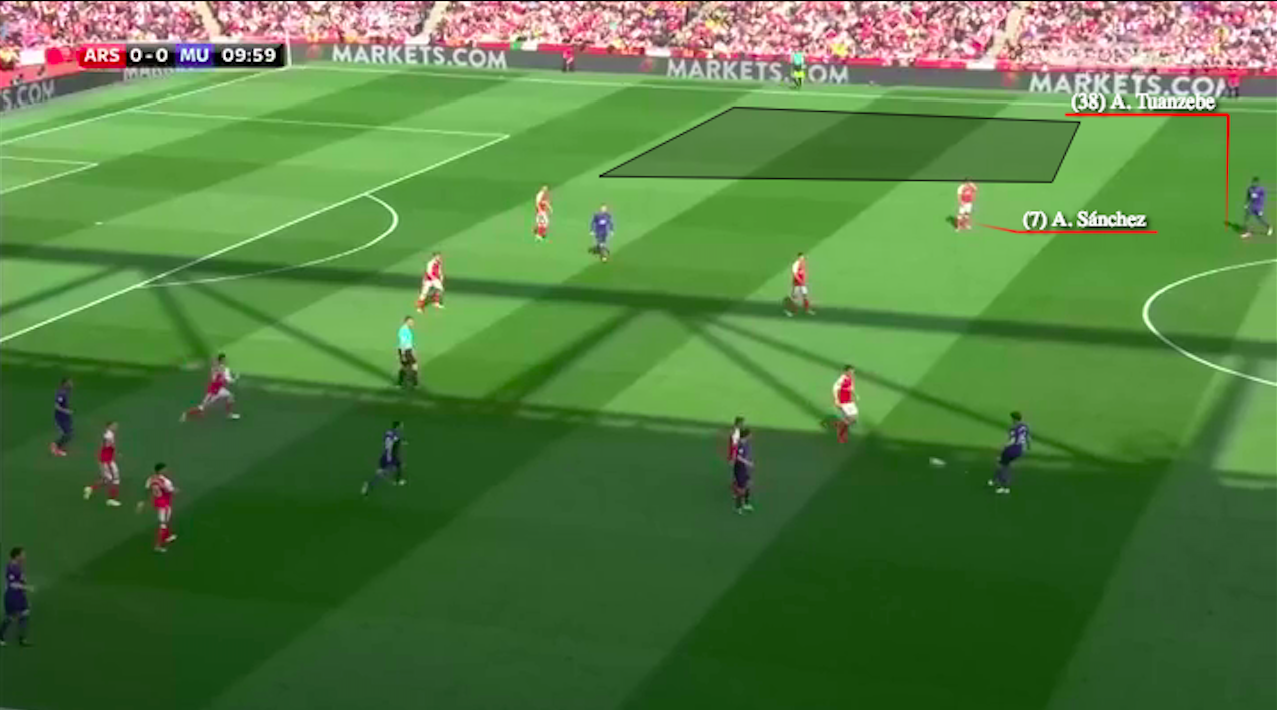 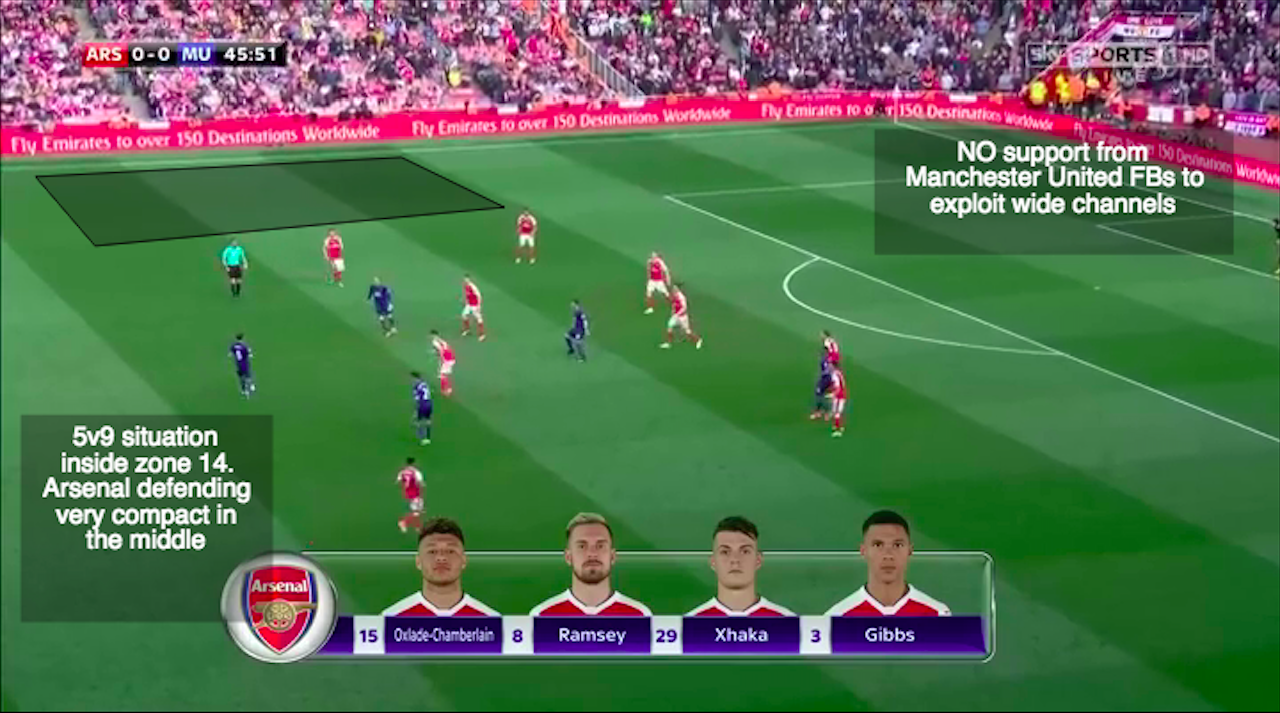 Alexis Sanchez and Ozil defensive roles were going to be relieved thank to Mourinho’s FBs lack of attacking instructions. Both Arsenal players were not threatened at all during the match which let them focus more in their attacking duties.

Despite Arsenal creating some chances during the first half, Jose Mourinho’s plan was working. Manchester United were solid in defending and created a couple of chances which should have finished finding the net but only 3 minutes of relaxation were enough for the “Gunners” to score twice and getting 3 points at the end of the match.

The first goal came from a long range shot by Xhaka who had a great help from Herrera’s back by creating a huge deflection and find De Gea out of position. But not only Herrera’s back helped Xhaka’s shot; Herrera’s lack of urgency to close down Xhaka would be the main factor for the first goal as seen on the video below.

The second goal was the result of Darmian giving space to Oxlade-Chamberlain to cross and Smalling not marking Welbeck tight enough inside the 18 yard box. At this level, those details are relevant and normally all needed to win a match.

Mourinho was going to bring Lingard (60th minute) and Rashford (63rd minute) into the match and these inclusions changed Manchester United formation to a 1-4-4-2 without any improvement to find a way to leave the Emirates with some points in the bag.

Manchester United lost another great opportunity to close the gap with Liverpool who drew against Southampton 0-0 earlier at Anfield. The top 4 battle is still on but it looks like Mourinho prefers to focus on winning the Europa League than finishing in the top 4 of the Premier League.