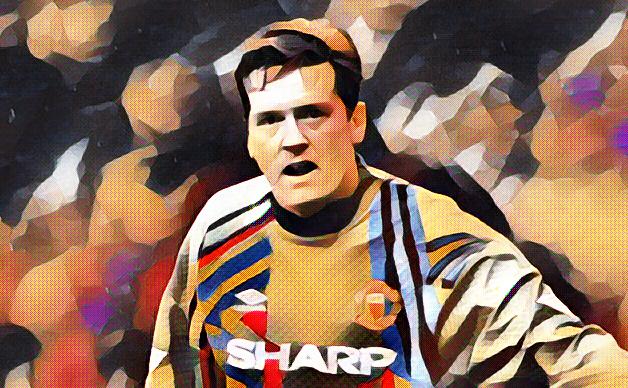 When Jim Leighton was caught flapping on two separate occasions, both of which led to goals during the 1990 FA Cup final, it was clear to Alex Ferguson that his faith in his long-serving keeper was finally up. Nearly ten seasons Leighton had served under Ferguson, firstly at Aberdeen, then following the Scot south of the border to Old Trafford. Some of Leighton’s performances that season left a lot to be desired, with many fans believing it was part of an ” old pals act ” by Ferguson, to keep him in the team. United managed to scrape a draw that day. The replay was the following Wednesday.

Ferguson, who was still to win his maiden trophy at United, did the unthinkable and dropped Leighton for the replay and brought in loanee, Les Sealey. Sealey was 32-years-old when he walked through the doors at the Cliff training ground, no spring chicken for sure, but his experience and enthusiasm helped him on the biggest stage of all, and they don’t come much bigger than an FA Cup Final. Crystal Palace tried to rough him up early doors, Andy Gray and Mark Bright, both putting pressure on the keeper hoping he would crumble. This certainly wasn’t the case. The big stopper stood tall and even made a couple of really good saves during the match. United would go on to win the replay with a 1-0 victory over Palace.

Les Sealey was a goalkeeper who had predominantly played for Luton during the 80’s, wracking up over 200 appearances. During the 1989/90 season, Sealey was loaned to United in the Spring but had only made two league appearances prior to the FA Cup Final. Earlier that season, Sealey had found himself down in the West Country, on loan at Plymouth Argyle. His debut for United came away at Queens Park Rangers in the March of 1990. United won the game 2-1, but Sealey was dropped for fit again Leighton, for the following league game.

Mike Hatfield, of the Wakefield Reds, commented: “It was at an away game at Loftus Road against QPR, and I had a seat right on the front row, behind the goal. Sealey was warming up before the game with, I think, Mike Phelan was taking shots at him. “England’s number one. England’s, England’s number one…” the crowd chanted. With that, Sealey turned round, and with a wry look on his face shouted back “Are you taking the fucking piss?” We were in hysterics, and “Sealey, Sealey, Sealey” bellowed from our lungs. Sealey returned the acknowledgement by lifting his shorts and baring his buttocks at us”

Ferguson’s decision raised a few eyebrows. Sealey would manage a clean sheet during the final, making a couple of important saves, to keep United’s lead intact. On receiving his FA Cup Winners medal, Sealey told Jim Leighton that as he had played near on every League and Cup game that season, he should be the beneficiary of the medal. Leighton accepted the offer, but only with Sealey saying he could not keep it for himself as he didn’t think he deserved it. An extra medal was later made and given to Sealey.

That summer, United made the move permanent for Sealey. Signed for an undisclosed fee from Luton Town, the outgoing Sealey, soon made the number one jersey his own. He became something of a crowd favourite, with his passionate displays and on-field spats with Steve Bruce, the Stretford End adored him. Sealey seemed to grow as each game went on. It was like he was waiting all his life to come and perform on the pitch at Old Trafford.

Ex-Red, Garry Pallister: “He came here on loan and ended up with a pocketful of medals. I think Les was a bit like a kid in a candy shop, getting the chance to play for United. At a stage of his career where he probably thought that it had all bypassed him, he got this move and suddenly he was playing in cup finals. It was a great time for Les and he was a big part of the dressing room culture.

“He was a proper crafty Cockney. The lads used to liken him to a car salesman. I remember once, a company wanted to do a phone deal with just the players, back when mobile phones were just starting out. They offered us free handsets and we were delighted with that, but then Les piped up and said: ‘Nah, we want free phone calls and all’. He had a chat with them and, before we knew it, we were getting free phones and calls.”

United went on to finish sixth that season, a massive improvement on the previous domestic campaign, but it was in the cup competitions that United again excelled. This time reaching two Finals. The first being the Rumbelows League Cup Final, facing Sheffield Wednesday, who were managed by former United manager Ron Atkinson. Within a calendar year, Sealey had played in three Cup Finals for United, the fans called him ” Lucky Les”.

United would lose to a goal scored by a childhood United fan. John Sheridan scored the only goal of the game to win it for the Owls. Sealey collided with one of the Wednesday forwards late in the second half, and with his knee gashed open and clearly needed stitches, United physio, Jim McGregor wanted to bring Les off, but he was having none of it. As McGregor tried to grab the keeper to his feet, Les, once again, went mental! This time lashing out at McGregor, pushing him away, no doubt using choice language to tell him where he could put his expert medical recommendation for coming off the pitch. The man’s determination and courage were beyond words. Les just wanted a bandage and the magic sponge. He even made sure that it was him still taking goal kicks and diving about.

Sealey made 30 appearances that season, until his injury during the League Cup final put a premature end to the season…or did it? He managed just one more appearance after that. The Cup Winners Cup Final.

Lain prostrate in Middlesex Hospital on 22 April 1991, Les Sealey was recovering from emergency surgery. Hours earlier, his knee had become infected after being accidentally gashed down to the bone by Paul Williams’ studs during United’s League Cup final defeat to Sheffield Wednesday.

Suddenly, Sealey saw through the post-anaesthesia fog. “It’s the Cup Winners’ Cup final in four weeks’ time,” he blurted to the doctor tending his bedside. “What chance have I got of playing in the big one?”

“Playing?” scoffed the doctor. “You’re lucky to be alive.”

Four weeks later, knee heavily bandaged, Sealey sported the widest grin of all as Sir Alex Ferguson’s underdogs cavorted in the Rotterdam rain. Barcelona had been vanquished, and the charismatic stopper had completed an unlikely comeback to bag his second winner’s medal in under a year after turning his loan from Luton into a permanent move.

The measure of the man was that he just refused to give up this chance that had been given to him. Under no circumstances would he let an injury ruin his fairytale season. United had also reached the European Cup Winners, Cup Final, where they would face Johan Cruyff’s, Barcelona. Sealey again played on with bandaged knee as United run out 2-1 winners in Rotterdam

Unfortunately for Sealey, United had found a Danish keeper by the name of Peter Schmeichel that summer. Sealey was offered a one-year deal, which he declined and moved on to Aston Villa. Sealey was to return to United a year later, as Schmeichel’s understudy, but again moved on after a brief second spell. He later appeared for Blackpool, West Ham and Leyton Orient, before returning to West Ham, where he later became goalkeeping coach.

To the older generation of United fans, Sealey will always be remembered as a little crazy, but very capable of being United’s custodian. Sadly Les Sealey suffered a fatal heart attack at the age of just 43. A sad end to the amazing story of Leslie Jesse Sealey. RIP sir. A true United great.