This past Thursday, Manchester United took on Spanish side, Celta Vigo, at Old Trafford for the second leg of the Europa League semi-final. Bringing home a 1 nil advantage from the previous week away in Vigo, it was United’s job to maintain, if not add to their thin lead in order to make it through to the final.

With plenty of questions roaming the fan’s minds, injuries and all, nobody thought this was an easy game to win. Coming off a defeat on the weekend to Arsenal, now falling to 6th in the Premier League (at time of writing), the Red Devils were meant to put everything they had into this game. Celta Vigo also going full force into this game, having much to prove of their own, who had more to lose?

From a tactical point of view, Manchester United could have approached this game in a couple of ways. Assuming Celta would use their customary methods, the best and easiest way the English side could come into this game is very similar to that of the first leg.

Like much of this season, Jesse Lingard is more of a key player than he is presumed. Being an underrated aspect of why/how Manchester United is successful in the build-up of play moving towards the oppositions final third.

Here, we see Lingard using his constant movement and positioning to United’s benefit. Lingard finds a perfect path to pass to Paul Pogba, from there he sees himself a clear run towards Celta’s 18 yard box. Lingard possesses the skill to make a defender question their next move. With his perpetual drive to create a play, he covers so much distance in order to make space or create runs for his teammates. Multiple times in a game, he is used to begin or switch the play involving multiple players each time, demonstrating the slow, technical build-up of Manchester United’s attack.

Fellaini as a number 10

There is no doubt this may have been one of Marouane Fellaini’s best game in a Red shirt. The way Mourinho has been able to use him in such a tactical way is extremely impressive. Being at the end of goal scoring opportunities or allowing his teammates to drift wide while he occupies the middle, Fellaini exploited Celta Vigo’s plan at defense. 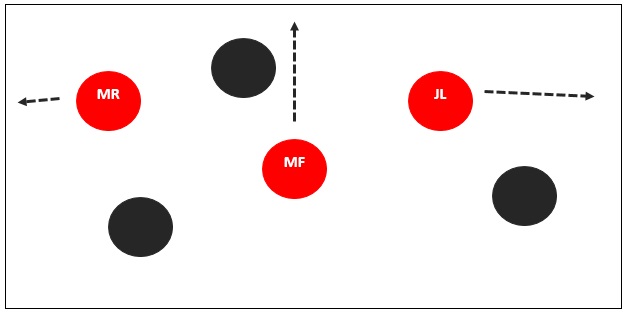 Leading up to his goal, the Belgian began to move forward high up the pitch while Marcus Rashford and Jesse Lingard moved out wide, spreading the match. This allowed the creativity and brilliant ball movement of Rashford to come alive. With a quick touch, turn on the ball and a second to look up, he crossed the ball beautifully to the far post where Fellaini had beaten his man to head in the back of the net.

This happened several times throughout the game. With the positional versatility of the United squad, Fellaini’s ability to be a perfect number 10 comes alive. He was able to be a key part of the attack, as well as, defense proving he could be a box to box midfielder. Arguably being the most active of the United middle, Marouane Fellaini helped secure and maintain United’s lead.

Once the Portuguese’s side had scored, a first of the night but second to the aggregate score, United begun to play a more defensive game. Another common ploy for the Red Devils. 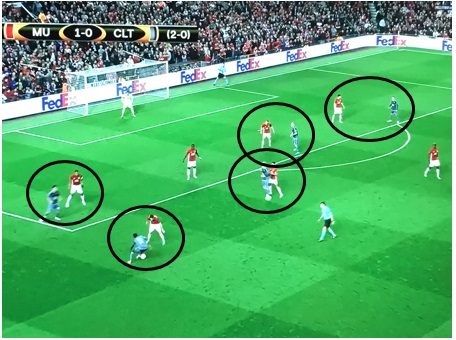 In this scenario, Celta Vigo is in the middle of developing an attack. With one man on the ball, there is a United player on every Celta one. Having Eric Bailly unmarking in the dire case a player slips by a defender, as well as, Pogba ready on the outside for a counter attack.

In the image above, an example of pressure is shown. When Celta Vigo’s men had possession of the ball, whether it be in the middle of the pitch or in their own half, United would begin to pressure. Putting pressure on a highly intense and fast team could interrupt the swiftness of their attack, resulting in mistakes being made. Because of this, players such as, Ander Herrera, were allowed to intercept the ball a total of 5 times. United’s middle men were able to stop the tempo of Celta and control the game without having the ball at their feet.

Much like the first leg, the intentions of these two teams were very clear. Although Manchester United could have swept this tie away, it was a hard fought battle for both sides. As Celta Vigo goes back to Spain having made club history, United looks to meet Ajax in the final, a thrilling and impressive team to watch. Will Manchester United add another trophy to their cabinet this year?