This Wednesday, Manchester United face Peter Bosz’s Dutch side, AFC Ajax, in the Europa League final in Stockholm. Making it to the last stage was not an easy ride for either team, just barely beating their respective sides, Celta Vigo and Olympique Lyonnais, on away goals. But which side has the finishing touches to pull off a championship victory?

For Ajax, losing by just one point on the final day of the Eredivisie campaign, was bad enough. They will do whatever it takes not to lose again. Coming just shy of the title since their last winning season in 2013/14, the once dominating Dutch side will look to take a trophy back to Amsterdam.

As for the English side, it has been all Europa or nothing. With the last weeks of the Premier League drawing to an end and the top four seeming impossible, manager Jose Mourinho made it very clear that his main focus was on the European competition, relying on this to make it into next seasons Champions League. Manchester United should look to put all they have (left) into this match, showing the true heart and spirit this team has. 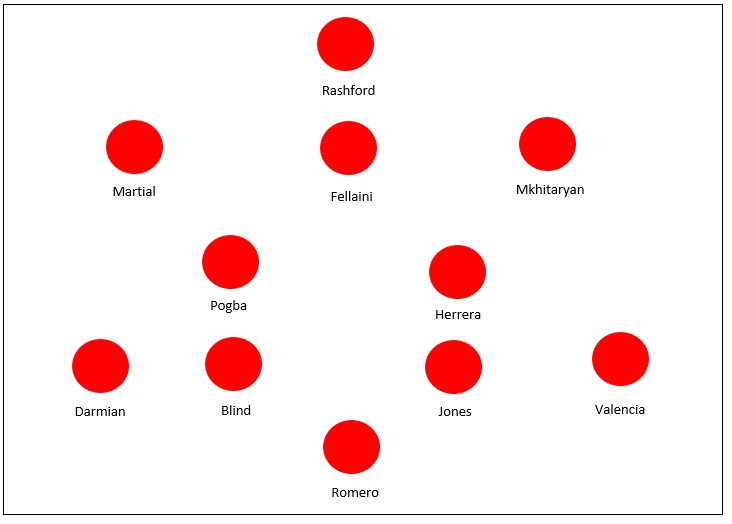 The match will presumably start off very quickly, with both teams looking to gain possession of the ball right from kick-off and attack at a similar rate. Although Ajax are known for their high pressing system, United can look to take advantages of the somewhat frequent errors the young side make.

Unquestionably, Man United have been great on the outside all season. It is part of their character and strengths to use the widths on both an attacking front and defensive one. In doing so, they can spread the game up and down the flanks to maintain possession as well as build an attacking chance.

For instance, United could use both short and long passes to the wide areas, resulting in quick bursts of attack. With two of the Red Devil’s key passers in the middle, Paul Pogba and Ander Herrera, playing from the middle to the outside should be a natural movement. Taking advantage of Ajax’s seemingly weak and slow fullbacks, Man United could attack from the flanks with the speed and ball control from wingers, Anthony Martial and Henrikh Mkhitaryan. From there taking on another apparent weakness in the young Dutch side.

Two things Ajax seems to be feeble in. Two things United can exploit.

Starting off with aerial duels and attacks, Manchester United have proven to be strong in both. With their most known aerial threat Marouane Fellaini, the Belgian could be of much use in Stockholm. As seen in previous matches, Fellaini is used as a free roaming midfield, regularly on the end of long passes from the middle, crosses from the outside, or the diverting man. With the high chance Ajax has prepared for the towering midfielder, there are other ways United may get around this. With the movement of Fellaini, he can switch to a deeper role, exchanging with Pogba who may act as another threat in the air.

With aerial attacks come its best friend, crossing. This is where everything could fall together to create an attacking chance and scoring opportunity. By using the flanks, this time from a deeper position starting from Antonio Valencia, an overlapping system could take effect. With such versatility in both Valencia and Mkhitaryan, briefly switching for an attack could strike an advantage for the Red side. A problem with Ajax’s defense is the inexperience and miscommunication in keeping their man. This being the cause of two out of three goals for Lyon in the semi-final. Once again this could come in handy for a player like Fellaini. Often losing his man for that split second, can result in a finishing chance from a perfectly timed cross.

One of the most key players for Ajax this season has been Hakim Ziyech. With amazing spatial awareness he is often able to divert opposition away, allowing openings for Davy Klaassen and Kasper Dolberg. Proving he is a threat in the middle, obtaining 10 assists in the Dutch league and 4 in Europa, it is safe to say that Ziyech is one of United’s biggest worry, but not impossible to stop.

Here’s what could happen if Manchester United gave the little space needed to the Dutch side by letting Ziyech roam free, movement.

But with Herrera and man marking…

Ander Herrera could be seen as the perfect man in isolating Ziyech. Like in a previous match against league winners, Chelsea, where Herrera was appointed the job of man marking Eden Hazard, a similar approach could work just as well. Although it may seem to work in Ajax’s favour of taking away a player while still freeing up Klaassen and Dolberg, man marking throughout the entire team could prevent that. With Ander Herrera focusing on the Ziyech, this allows for Ajax to have a harder time with their pressing defense. What normally would see Ziyech possibly convert as a striker alongside Dolberg in a defensive sense, with Herrera on his back, this would force Klaassen to take on his role. Fatiguing the Dutchman is where United could run the attack, using the personal errors Ajax often gives up.

Last but not least, Manchester United will need to use the one thing they are guaranteed to have over Ajax, experience. Nonetheless, the Dutch side has been the most dominant side in the Netherlands since most can remember, but with the constant interchanging of youth and development, their in-game intelligence and composure may prove to be a weakness. Seeing as the average age of their most frequent starting IV is 22 years old, United could one up them by using their experience and knowledge to overtake the youngsters when it counts the most.

There is no doubt that there is a lot at stake for both sides in this year’s Europa League final. What were once two dominating sides of Europe, are now fighting for a last hope in reviving their clubs history. With a vast amount of pressure for Jose Mourinho’s Manchester United to make in back into Europe’s top flight, it is time for them to take what is theirs. With the vision so close, it comes down to 90 minutes of skill and knowledge to reach the goal. What would be a third piece of silverware this season, Manchester United look to beat AFC Ajax in Stockholm, Sweden.