As we hit the second week of June, the opening days of the summer transfer window have begun to spark plenty of rumors and truths behind the actions of Europe’s top teams. As some deals pop out of nowhere, others have been waiting to happen.

Starting off as a rumor, Manchester United have been linked to the 22-year old Swedish centre-back, Victor Lindelöf, from Portuguese side, SL Benfica. With an impressive campaign, attracting attention to himself in both the Primeira Liga and the Champions League, he caught the eye of United manager, José Mourinho. Making him the first official signing of the summer, Lindelöf awaits personal terms and team medicals before joining the English side.

As a fan, you are left anticipating who your team will purchase next, where they come from, and what are they all about…

So who is Victor Lindelöf?

Being a central defender in modern day football comes with more responsibility and expectations than those of previous times in the sport. As the styles of attack change and adapt to those of present number 9’s and 10’s, a defender has to be able to keep up and cover his backline.

At Manchester United, with the signing of Victor Lindelöf, the depth coverage at the back would not be as exposed as it has been in recent times. Although it may not be perfect, what Lindelöf has to offer United would be that of an improvement to what is merely absent in the back. Being able to overlap or cover for your teammate, minimalizing the attack or causing mistakes. 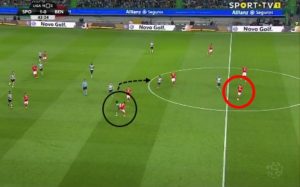 Here, Lindelöf is highlighted, as well as, the man with possession of the ball. As the ball is passed, the opposition is prepared to roll of his defender and burst forward for a quick receiving give-and-go pass. 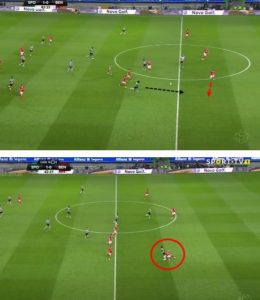 In this sequence, the preparation of the give-and-go had been initiated by the opposing side. From the starting position, Lindelöf set himself up for potentially needing to cover the open area on the right side of the pitch if his teammate had been surpassed. When this happened, Lindelöf was ready to beat his man, clearing the ball from his half, as well as, winning back possession for his team.

With covering depth in your own final third, comes a key component in order for efficiency. Defensive positioning takes a massive effect in disallowing the opposition to make any sort of advancements or chance creations towards your goal.

Like any team or individual player, it is hard to be positioned correctly 100% of the time in a full 90-minute match. It is the correction of mistakes or improvements being made that make a player stand out.

For Victor Lindelöf, his positioning has become somewhat of a reliance for Benfica’s defense. 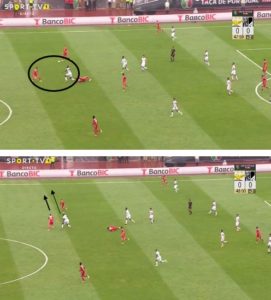 In the images above, Lindelöf’s positioning helps trace his opposition to give up possession. First, we see the Swedish centre-back facing his opponent, squaring up knowing he potentially could not win the aerial duel ahead. Once the ball comes to the ground, it is fair play once again where Lindelöf then turns and follows his man who makes a quick run to the outside. Blocking any clear passing lane, Lindelöf drives the attacker to the outside flank where he makes an unintelligent pass resulting in failing to keep possession.

Positioning of any kind goes hand in hand with awareness. Being aware of your surroundings, both that of your teammates and opponents alike permits the stoppage of attacks and forces mistakes upon the opposition. A trait Manchester United could feed off of Victor Lindelöf.

Unfortunately, a known weakness of the young centre-back is his lack of ability in tackling. Something that is important in being a defender, although not completely necessary. As silly as that may sound, it is not unheard of. Lindelöf could play as a stand-up defender, relying more so on his positioning, ball control, and work rate to make up for what he lacks. Using his strong physicality, Lindelöf can count on his amazing way of sticking to a player and squaring up in order to cancel out a pass or chance creation.

Tackling is an issue the coaches and team at Manchester United could easily help develop in the young Lindelöf’s playing style. Nothing to be a huge worry to the team and fans alike seeing as there are tidier, sometimes more efficient ways in defending that Lindelöf proves to be very good at.

Easily the Swede’s best and most looked at skill, is his ability to pass. Something that is very significant in United’s game, with talented passers such as Ander Herrera and Paul Pogba linking plays through the middle. Lindelöf could enhance such a style by playing more from the back.

With a 90% passing accuracy and the most passes in the Primeira Liga from any defender, Lindelöf has the skill and knowledge when to use short and long passes to hold onto possession of the ball.

In these clips, displays the variety of passing Lindelöf is capable of. Knowing when to use both short and long passes is very important for a ball-playing centre-back such as himself. Using his composure on the ball to allow himself to take the ball forward when seeing an opportunity or using his awareness for his teammates has proven to be a strong trait in his style of play.

Using Lindelöf in the middle of the defense, Manchester United could capitalize on playing the ball from the back instead of mainly relying on the midfield.

As the first United transfer of the pre-season is made, fans are delighting to see it is the improvements of the defense that have been labeled as a top priority for José Mourinho. Although goal conceding wasn’t one of the Red Devils main weaknesses of this past season, it was the lack of depth –due to injuries- and chemistry that seemed to be a standout issue. As there are still enhancements that need to be made in the young Swede’s game, it is no doubt that he has the utmost potential to help in the succeeding of Manchester United for seasons to come. With the partnering of Eric Bailly, many have said the two to be the modern Vidic-Ferdinand of the United back four. With José Mourinho’s sixth sense for defense, Victor Lindelöf is sure to reach his heights in the Premier League.