As Manchester United have made their first official signing of the summer in central defender, Victor Lindelöf, they look to add more depth to the squad for next season. With plenty of talent on the pitch, there is always room for more improvement and development throughout the starting IV.

Apart from the young defender, another player has seemed to have caught the eye of José Mourinho, the Croatian winger, Ivan Perišić. Much controversy has come out of speculation, seeing as the Red Devils have plenty of outstanding players for the flanks and have had next to no problems out wide. So the question comes into play;

How does Ivan Perišić fit into the plans of Manchester United?

Having a very eventful career, both domestically and internationally, Ivan Perišić has developed his traits and knowledge due to a great amount of experience.

Starting his career off in France at the young age of 17, Perišić swiftly moved up the ranks of European football. Making a name for himself early on and being part of some of the top teams before settling down in Italy, playing for I Nerazzurri (the black and blue) side of Milan, Internazionale.

Playing for Croatia in three major international competitions; UEFA Euro 2012, FIFA World Cup 2014 and UEFA Euro 2016, Perišić took the world by surprise with an outstanding performance. If you didn’t know about him before, you certainly did now.

Over the course of his career, Perišić has grown as an individual and adds certain qualities to every team he has been on. Playing his role as a traditional left winger, the Croatian not only improves but defines the ability to attack for his side. His part on the flank allows him to do the following;

Drift inside, with or without the ball, to play as a second striker (assuming United play with a single striker formation) or add aerial opportunities.

Stays wide looking to take his opponent on, something he is very keen on doing with his speed and agility.

Having Perišić on the left side opens up the striker position for Marcus Rashford (if no number 9 signing is made). For the majority of last season, Rashford was required to drift to an outside position in order to make space for Zlatan Ibrahimovic. A spot he was not used to but, in his defense, adapted to and made his own fairly quickly. Much like in the previous season with Antony Martial, where he found himself put as the number 11 man, after the breakthrough of Rashford. It appears to be that United struggle to find a permanent, authentic winger for the left side. As an experienced player in his rightful position, Ivan Perišić could be the missing piece United have been looking for.

As stated above, Perišić has the incredible ability to act on certain roles of a left winger. To be a traditional winger, you are known as the outlet for your teammates, whether that be to switch the play, use pace on the flanks during an attack or create/open space. Opening up space for himself or for his teammates with his smart movements has become a strong trait of the Croatians. 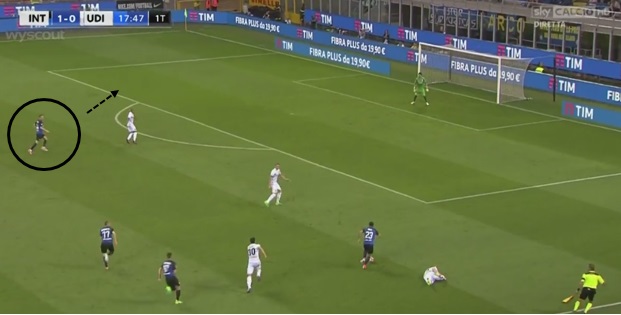 Here, we see Perišić joining the attack from the left flank. With just one defender between him and Udinese’s goal, Perišić has nothing to lose but to drive to the net as a passing opportunity.

As the play builds up, Perišić continues his run into the 18-yard box. When the defender narrows in, it makes it easier for Perišić to speed past finding a split second of open space. Then receiving the end of a pass, he is able to get a foot on the ball to add his name on the score sheet. A brilliant run and finish created by intelligent off the ball movement.

On the ball, the Croatian is just as good. With excellent ball control and handling, Perišić is able to perform and create the same chances he is given when not having the ball. 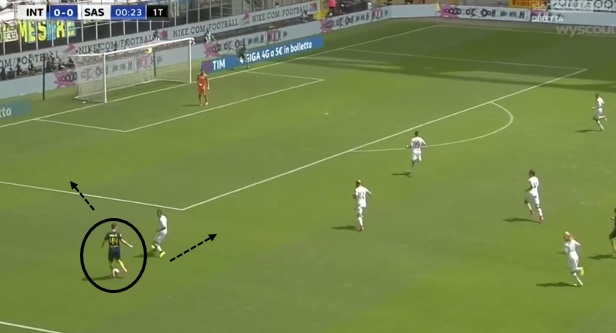 Above, we see Perišić in the middle of a dribble up the flank. After delivery of the ball in open space, Perišić is given two options once he meets his opposition; cut inside or drive forward to either beat his man or drop a cross into the box.

In this particular play, Perišić decides to take on his man, faking a cut inside only to briefly get past and delivers a low cross into the box. Although a goal was not an end result of the play, a chance was created and a momentary panic had settled into the opposition’s mind.

What Manchester United have lacked this season is a real threat on the left side. Although when placed there, Rashford and Martial have proven they have the speed and agility to be on the flank but neither has developed the proper ability to cross or create open space in the 18-yard box. With Perišić, his comfort in that position will allow a proper outlet for Manchester United in the attack.

A common misconception about attacking wingers is their seeming lack of defensive responsibly. Although it’s not as high, every player on the pitch is accountable, to some degree, in defending or winning the ball back from the opposition.

As good as Perišić is during the attack, he is just as appreciated for his ability to retain possession for his team and advance that into quick offensive opportunities.

In this image, Perišić and his teammate are seen each covering a man on the sideline to try and stop any advances being made. As the opposition turns his back to the Inter coverage, he exposes himself to Perišić. Taking a chance, Perišić pressures forward, causing the player on the ball to make a quick turn, seeming to forget the other Inter man behind him.

Now being in a defensive 2 v 1 position for Inter, Perišić sees the opportunity to then continue to move forward towards the opposition, dispossessing him and winning back possession for his side and beginning a counter-attack.

Ivan Perišić’s defensive abilities are one up against the likes of Anthony Martial and Marcus Rashford, reverting back to his experience and skill on the left wing. When a quick change of possession is needed, United can look to Perišić in helping out defensively in order to help out offensively.

Things to keep in mind

There are many aspects that Ivan Perišić brings to the pitch that could greatly benefit Manchester United in the upcoming and future seasons. But as no player is perfect, there are some minor things to consider if José Mourinho does decide to sign the Croatian.

Firstly, what does it mean for Anthony Martial? Seeing as he didn’t have as much time on the pitch this season as fans would have liked, it would be even harder for him to get playing time if Perišić joined the side. José Mourinho seems to prefer Rashford up top, leaving no room for Martial as a number 9 either. As many fans don’t want to see Martial leave the club, conflict may arise with the arrival of a traditional, proper left winger.

And secondly, what future does Perišić really have at Manchester United? As amazing as the Croatian is, he is and would be one of the older players in the United squad. Not to say that would affect his performance or the team negatively in one season, but it does make a fan wonder how long he could be a factor in the Red Devil’s success. Having just reached his prime, Perišić has a couple more seasons before potentially needing to pass the torch. Depending on which side of the spectrum preferred, Perišić could become a part of rebuilding Manchester United before leaving or seen as a fault in losing the real future of United as an example in Anthony Martial.

Although the reports have simmered down, the likelihood of Ivan Perišić joining Manchester United has not been ruled out. With his immense talent and experience, what he adds to the squad would truly help in the success of next campaign and ones to come. Although his age would be the only minor setback, his involvement has shown he could be part of a permanent starting team sheet, something that José Mourinho struggled to find all season. Helping players around him development in their benefited positions, whilst being the playmaker on the left, Ivan Perišić would be an enormous aspect to a rebuilding Manchester side.