Another week passes as Manchester United have yet to make another addition to their squad. As rumours build and spread, fans begin to wonder the thoughts and plans of manager José Mourinho. As it is known, Mourinho likes to have his official and final squad assembled before the North American tour starting in mid-July. With one signing down in Swedish defender, Victor Lindelöf, United look to fill another void. A void in the midfield. Although it is arguably said that United’s midfield was not at all their weakness of last season, nor is it a lack of talent but perhaps there are certain traits missing in order to allow players as individuals to work to their fullest potential.

Fabinho, a Brazilian full-back turned midfielder, from Ligue 1’s 2016/17 champion side, AS Monaco, is looking to be a potential signing and extremely good fit to this José Mourinho side.

But how does he fit the Manchester United squad?

Recognized for being the holding midfielder at Monaco, the young Brazilian made his debut for Real Madrid in 2013 playing a full-back role during José Mourinho’s spell with Los Blancos. But it was under Leonardo Jardim where his central abilities were discovered and used as an asset to the French side.

For Manchester United, Fabinho’s versatility could become a massive aid in not only squad rotation but depth as well. Although it would seem that the role of Fabinho would be that of a starting one, with the mass amount of competitions to be involved in, having depth is always a plus.

To take a look at Fabinho, you have to break him down into two key factors/roles;

From here, it can be discussed in how he would be used at Manchester United.

Granting the Red Devils already have a superb and veteran full-back in Antonio Valencia, but it doesn’t hurt adding this as a potential position for Fabinho. Where he seems to be most comfortable is out wide, using pace and strength up and down the flanks in both a defensive and offensive manner. Although a full-back position is not necessarily of dire need to United, having Fabinho in the squad would allow rotation for Valencia without taking away the traits of the United right-back.

Arguably the missing piece to complete the Manchester United puzzle. A proper number 4 position. A position United have covered as well but need a fresh pair of boots to fill in.

Throughout this season, the Red Devils were seen playing in two favourable formations; 4-4-3 or 4-2-3-1, using the Pogba-Herrera-Fellaini combination as the complimentary midfield.

Where Fabinho would fit, is right in front of the centre-halves. Holding a deep-lying position allowing the likes of Pogba and/or Herrera to pursue the attack and fall back when needed. Using his spatial awareness and ability to drift wide to cover or maintain possession. Something that is a disadvantage to a United player like Michael Carrick. Though Carrick is a great holding midfielder, his lack of pace falls as a drawback when covering the wider areas of the pitch or when sitting deep.

As a defensive midfield, the ability to cover depth when needed is extremely important for many reasons. This allows a bit more liberty to the back four at a reasonable cost.

For Manchester United, fullbacks can be a key to the attack, especially when it comes to Antonio Valencia. But what had become a minor issue, was the lack of coverage or overlapping in the likes of a counter attack. It was easy for opposing sides to recreate a similar attack on the same side when Valencia had gotten caught on a break.

What Fabinho has done under his time with Jardim is covering the flank when needed, allowing him to apply all that he knows with a quick transition.

Here, we see Fabinho and teammate, right-back, Djibril Sidibé, in a formed defensive line. As the opposition make a progressive run, Sidibé –as Valencia would- steps up to apply pressure to the man with the ball. As he does so, he exposes the corner of his own defensive third. 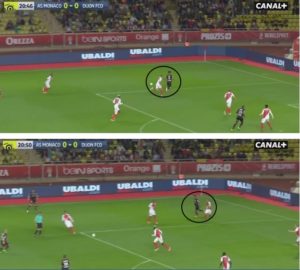 Fabinho, noticing the space and seeing an open pursuing man making a run towards the corner, steps into a role of a right-back to follow the new man on the ball. When the opposition realises there is no clear path for passing or shooting, he turns back towards the middle to reset the play. Here, Fabinho used his full-back mentality to cover his teammate in what could have been a quick attack leading to a goal scoring opportunity.

Fabinho’s comfortableness and composure on and off the ball allows for him to cover not only his natural position of a full-back but that of a centre-back as well. A position he could arguably do quite well at due to his tall and strong frame making him a difficult target to surpass. 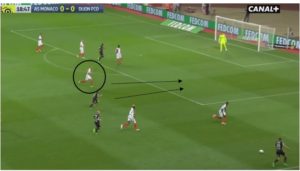 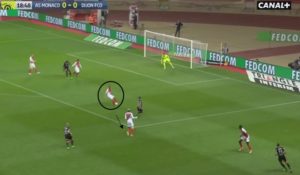 In the series above, a similar example of covering depth is shown but this time in a more central position.

As the opposition pay the ball out wide, Monaco’s centre-backs have pushed wider in order to cover the man on the ball. Once again leaving an open space, now in the middle of their own 18-yard box. Fabinho, coming from his holding position, spots the open area the same time as his opposition. Beating his man to the spot as the pass is played into the middle, letting Fabinho intercept the pass and play the ball outward to his teammate, who then turns to continue the build-up for his side.

Applying coverage, especially in a defensive sense, is a vital part of Fabinho’s style of play. A key component that would compliment the elegance of both Valencia and Pogba as much as it does for Sidibé and Bakayoko.

Paul Pogba is seen to be one of the world’s best midfielders when playing to his best abilities. Pogba needs the freedom and space he knows how to use in order to create and finish the chances he is given. With a proper defensive partner in Fabinho, this would allow Pogba to be the maestro of Manchester United.

What Fabinho could be seen as is a modern day regista. A proper holding mid with the ability to pass, create and link up all plays through his middle. Something Fabinho is familiar with for Monaco. 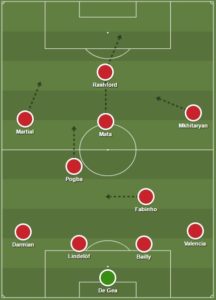 Here is a visualization of Pogba’s freedom. As the play was to build up from United’s defensive third, Paul Pogba would play as more of a box to box midfielder while Fabinho holds his position in front of the back four. Allowing Pogba to control the middle, making him the playmaker for United, using his accurate short and long passes for his teammates.

Using this strategy, United’s attacking formation would change into a wider diamond 4-1-4-1 as such: 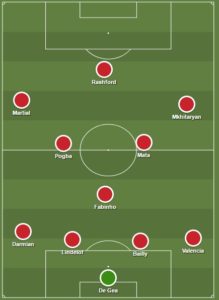 Paul Pogba has an immense amount of potential, something that was foreseen a long time ago. Since his return to England, his abilities, though known are there, have been questioned due to the lack of help he had this season. What Pogba needs in order to fulfill his duties, is a strong, composed and comfortable counterpart to hold the middle while he joins in or creates an attack.

As Fabinho did all season with teammate Tiemoué Bakayoko, he would be the perfect pairing for Pogba.

Although it is still just the beginning of the summer transfer window, José Mourinho’s shortlist of signings is most likely far from finished. It has become evident that Manchester United are still missing some key components that contribute to the success of the club for the following campaign and ones to come and Mourinho is in Manchester to bring back the triumph. With a player like Fabinho adding depth, versatility, strength, and pace, he could become a big part in what changes the team for the better. A near perfect replacement to the aging Michael Carrick or a breath of fresh air for fullback Antonia Valencia, the young Brazilian would be a fantastic addition to the United squad.