Ah, summer break/transfer window; a time where anything and everything is possible. From unexpected moves to record-breaking contracts and fees, these phases help to build, re-build and better teams for the upcoming season. When teams look to take advantage of the international tournaments that happen annually to scout, assess, and make note of those who impress throughout. And lastly, a time when fans are put through worlds of emotions, constantly checking their smartphones and social media for the newest transfer updates. To put in simpler terms, an exciting time for all.

Although the window has only officially been open for 4 days, that never stops teams from discussing and processing terms with managers and players to bring over. For Manchester United, their first signing was already in the books with the addition of Swedish centre-back, Victor Lindelöf, from Portuguese side, SL Benfica. A young but tactically intelligent, ball playing centre-back whose qualities seem to go hand in hand with those of Eric Bailly.

For a complete and in-depth analysis on how Victor Lindelöf fits Manchester United, click here.

With the intelligence of José Mourinho and his reputation of astonishing second seasons, fans have every right to be extremely excited for the next campaign. But with his strategies a tad unclear and his plans of having a new and improved squad ready for the summer North American tour, hopes seem to fall a little short.

Regardless of the addition of Lindelöf, it is clear that some changes need to be made due to flaws that were shown exposed last season. So why not take a look at how Manchester United could go about these weaknesses with their most current squad.

Formations in football are a way of portraying your squad to the best of their abilities, or to the weaknesses to the opposing side. Choosing your formation varies on who is selected in the lineup, the tactics discussed, and even down to the substitutions chosen for the bench.

As the majority of teams do, this past season United found themselves comfortable in a selective amount of formations. Interchanging between a flat or defensive 4-3-3 and a flat 4-2-3-1, United played some of last season’s best football. Using these formations and the tactics of Mourinho, strengths were created in some the most unexpected players or even in the sense of spotting a fault in the opposition. 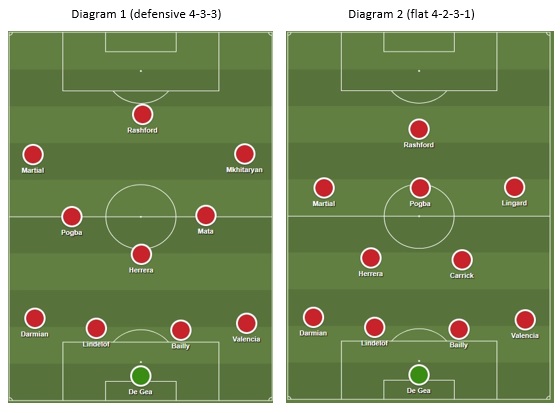 With these diagrams and using the current squad* (although more are likely to be added) we can refer to them as this report goes on, finding the best ways United could use their advantages in both offensive and defensive situations. While reading you will happen to look back as sometimes both attacking and defending situations coincide much quicker at times.

An obvious major issue regarding the attacking progress of Manchester United last season was finishing. Resulting in way too many draws throughout the year. Even with the likes of great goal scorers such as Zlatan Ibrahimovic, Marcus Rashford, and Anthony Martial.

For both the formations above, they fall in similar paths of one player; Paul Pogba.

Not to say use Pogba and Pogba only, but why not use one of the best midfielders in the world to the best of his abilities?

It is clear that United need a proper number 10 or free roaming midfielder who can control the pace and tempo from both an offensive and defensive standpoint.

In Diagram 1 Pogba could be used as more of a regista or deep-lying playmaker in order to set the tempo of the game from the middle of the pitch or his own half. Using his quickness and amazing ball control to create and find open space for passing or making a run on his own. A similar role he played during his spell for Italian side, Juventus, but never got a chance to fully demonstrate last season.

For Diagram 2 the Frenchman could be used as a trequartista-meaning ‘playmaker’ in Italian- and a more traditional number 10. Using his great ability to create and finish chances exactly in the way United have been missing.

Last season, the inclusion of Eric Bailly was a big improvement from the previous year. As defense wasn’t much of a concern until the latter half of the campaign, when injuries saw Marcus Rojo out for the remainder of the season and sporadic visits from Chris Smalling and Phil Jones, so the signing of Victor Lindelöf adds to the depth and diverse abilities of United’s backline.

As for the defensive side of the midfield, last season was where certain players such as Ander Herrera, made their mark.

In Diagram 1 lots can be done defensively. Like previously used, a more free roaming but controlled midfield was exemplified really well. Starting off as a structured mould with a defensive midfielder sitting above the back line, to a transition attacking play resulting in the rotation or overlapping between the 3 to briefly create a new formation.

For Diagram 2 a more concrete defensive pack could be made by the defensive midfielders and the centre-backs.

With the intelligence and leadership of Michael Carrick and Ander Herrera, knowing when to stay behind and allowing his defensive partner to move forward in the attack, or even when to slide down and assist the back 4.

As far as the back 4 goes, in both Diagram 1+2, the partnership of Bailly and Lindelöf could be used to its fullest potential.

With the ability to cover depth from both defenders, this could allow either or to advance forward if ever need be.

Strengths and weaknesses are a part of everything. No team is too good nor too bad to make improvements. For United, the end goal is to achieve what has been done in the past; winning, records broken, trebles, the list could go on. To do so, it is obvious that a proper foundation of a squad needs to be built.

With the annual North American tour just weeks away and the 2017/18 Premier League campaign around the corner, Manchester United look to sign more additions to their squad. Although plenty of time is left in the window and the trustworthy plans of José Mourinho seem to be slowly falling into place, the announcement of a new face at Old Trafford is bound to happen.

*much of this might change at the beginning of next season, in the hopes United sign more players, things will be more clear and thought out as a result