As Manchester United’s pre-season tour has begun, Jose Mourinho looks to test and piece together what would be his frequent starting side for the upcoming season. Though it seems likely that Mourinho has only purchased 2 out of his 4 signings and with plenty of players seemingly intertwined to the English side, there is one player that fits. A player that seems to really make sense in all of this mist that is irrational rumors. That player being yet another familiar face of the Premier League and England’s national team in most recent times. None other than Tottenham Hotspur’s, Eric Dier.

The career path of the young Englishman is quite interesting and uncommon from those born in the UK. Growing up and making his way through the ranks in Portugal, Dier took a route that some could say paved the make-way of his career thus far.

Spending the entirety of his youth career and the beginning of his senior time with Portuguese side, Sporting CP, where another famous United man – and debatably best player in modern football – came up from, Cristiano Ronaldo. Coincidence? Perhaps not.

But of course, an English boy in Portugal wouldn’t go unnoticed as his national side, followed by one of the bigger teams from North London, Tottenham Hotspur. Since making his way to the top flight of England, Eric Dier has turned heads and made himself a player no one wants to miss.

So why is it that a club such as Manchester United should be looking at Eric Dier?

Over his time with Tottenham and specifically under Mauricio Pochettino, Eric Dier has taken on the role of being a versatile defensive minded player. Experimented in multiple different positions and having quite some success in all of them is a key factor of what makes Dier stand out and conceivably fit in the plans of many teams.

As for Manchester United, lack of depth took a toll in the latter half of the season where it seemed like Jose Mourinho was placing players in unnatural positions. This is where not only a deep squad would obviously come in handy but also the work of a versatile man.

Eric Dier has been seen in a number of defensive positions throughout this season. Starting off in what seemed to be his more likely spot as a defensive midfielder, then having a run at centre-back and right-back. Dier proved with his immense work rate and defensive capabilities, he could be an important piece to any puzzle. 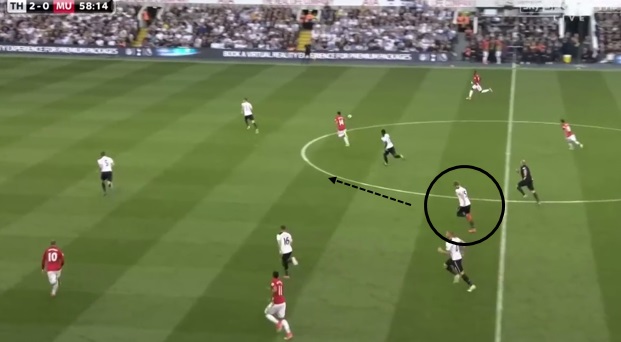 Here we see Eric Dier making a run back after the possession has been gaining by opponents, Manchester United. 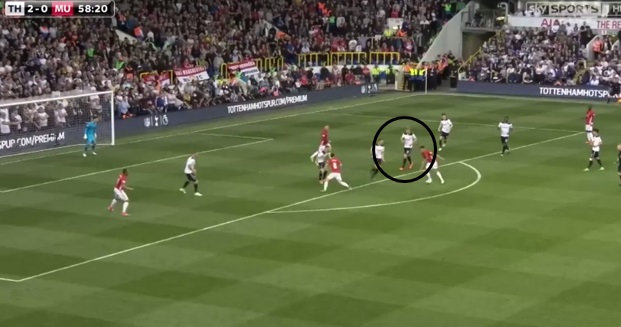 As the ball made its way down to Tottenham’s final third, so did Dier. Creating a 2 v 1 situation with his teammate and holding a strict defensive line in the back disallowed a shot on goal from the opposition. 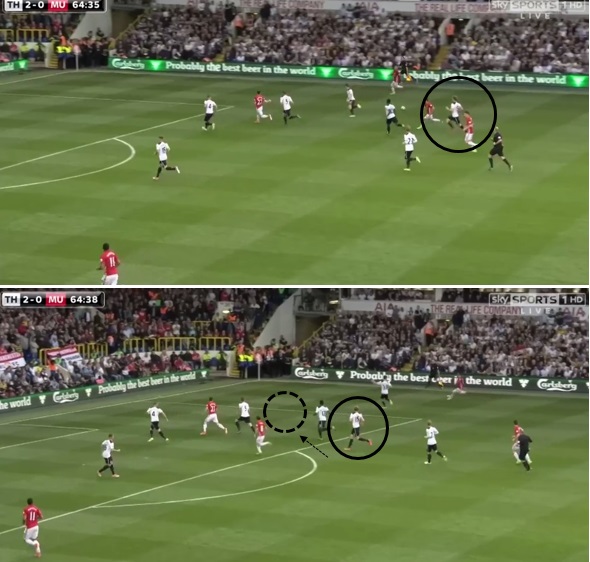 Once again in this match, Dier finds himself in a similar position covering the depth in his own final third. Starting off in a behind-the-ball position as Manchester United begin the attack, Dier quickly finds an open potential area inside the 18-yard box to cover and make his zone. This would be in case a United player in the box dropped back for a pass/low cross at the edge of the box, resulting in a shot or continuation of play.

Drop back to allow forward

In any of the selected positions Eric Dier has played, a common trait follows suite to all of them. The ability he has to allow his counterparts to trace up the field whether it be in an attacking sense or simply to push forward while staying back or covering the depth in said position.

When playing as a central defensive midfielder, he allows Wanyama to push forward while he holds his line above the back four.

As a centre-back or right-back, he functioned in such a way to allow Kyle Walker to be a part of the attacking play/build up, running up the flank to create or pursue a chance in the final third.

Similar to how United play, if Dier were to be partnered up with Paul Pogba, this would bring out the best of what could be United’s main way of attack. Encouraging Pogba to push forward and take on a number 10 role, while Dier held back using his ability to pass from the back as a way of initiating an attack.

As well as with Antonia Valencia, United’s right-back who loves to use his speed up the flanks and take advantage of his crossing abilities in the oppositions final third.

Once again going back to how Eric Dier is very versatile and has the capability to cover positioning and depth when needed is such an important and special skill to have, one that is very rare to find in a young player such as himself.

Eric Dier’s fantastic range of passing has resulted in him being one of the top players in the Premier League with attempted passes last season. Ranked just under his counterpart, Victor Wanyama, just proves the importance this was to Tottenham.

As is to every team in football, passing is the key build up to just about anything. Whether it is playing from the back or finishing in the final third, a range of passes is such an important factor when looking for any player, especially a midfielder.

Sharing a similar skill to Paul Pogba and playing to the style of Manchester United would be an easy thing for Dier. In the same ways as above, allowing his teammates to push forward knowing that their holding midfield has a variety of passes to pursue an attacking buildup.

With the start of a new Premier League season approaching faster than it seems, it is clear that Jose Mourinho is looking to strengthen his squad for his plans to unfold. As United has no shortage of attacking depth and power, it seems to be a wiser choice now to go for the assets of a defensive midfielder, such as Eric Dier, to accompany and bring out the best of Paul Pogba. With the talent and in-game intelligence for such a young player would only help both parties in the long run. Going for a player on a title contending team in the same league may be an obstacle in its own but nonetheless, could this be the perfect signing for Manchester United.