Finally! It’s August and competitive United return to competitive football after a two-month break. United start with a tough game against the all-conquering Real Madrid in the UEFA Super Cup.

While I wish that I was sitting behind the desk in Carrington going over notes and video analysis on my computer, here I am, The Boss looking forward to the game behind the computer, but at home.

Well let’s get to it, shall we!

Starting in goal is David de Gea. I want to give the Spaniard a complete match ahead of the Premier League season.

As we are short in manpower in central defence with the suspension of Eric Bailly and the injured Marcos Rojo. We will continue with the four at the back rather than playing a back three.

Starting in the central defence is new boy Victor Lindelof. Though he has at times been uncomfortable in pre-season he will have to be at his best and marshal the defence against Madrid’s imperious attack. We sure are going to miss Eric in this one.

Starting alongside Victor is Chris Smalling. Despite being back to his old bad habits in pre-season, I will play him over Jones like in the Europa League Final.

Valencia slots in at right back and Darmian will hold the fort at the other side. Blind will have to make do with a place on the bench. His lack of pace on the right will hurt United and his game against Sampdoria forces me to go to the Italian.

I am on the fence with new boy Matic’s fitness. I want my players to go on the pitch expecting to play the full 90 minutes in the Balkan heat wave. Having trained alone for the entirety of the summer bar the past week and having just the 45 minutes against Sampdoria in midfield, Matic will have to make do with only a place on the bench in this one. Captain Michael Carrick will sit in front of defence for this one and I want him to use his experience and winning mentality to guide us over the line.

Alongside Michael in our three man midfield is Pogba and Herrera in the left and right respectively. Should Ronaldo play despite having just a week of training under his belt, he will be the best player on the pitch and Herrera will have to pull the same job he pulled on Hazard back in April.

The forward line is where I have a fully fit group of players to call upon. Lukaku starts as our No.9, no second thoughts on that. I want Lukaku to be clinical. We may get just a couple of chances all night but it falls to the Belgian I’d expect him to put it in. No pressure but try scoring with your first touch against the European Champions Rom.

On the left, I start Martial. What a lad! He will be full of confidence after that display against Carvajal (who in all probability will start at right-back) in the States.

On the right, I will play Henrikh Mkhitaryan. Will be crucial when breaking up the opposition attack and turning defence into attack quickly. I will let him drift towards the centre and cause chaos in that Madrid backline.

Playing the 4-3-3 gives us some tactical flexibility and has been successful for us in previous matches. The midfield has to work hard and not give Kroos and Modric any space to work with. Herrera will be tasked with nipping at their heels and be the nuisance that he is.

On the bench, I have Sergio Romero as the backup goalie. Matic, Pereira, Blind, Rashford and Mata on the bench. 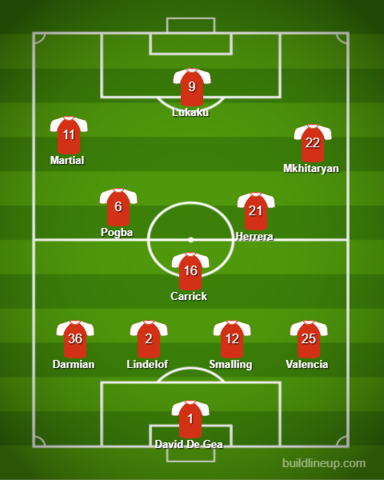 Well folks, that’s what my team is.

Over to the men on the field…..