On Tuesday, August 8th two teams met in the capital of Macedonia for the annual Super Cup final. A match between the triumphant winners of the UEFA Champions League and the UEFA Europa League. This year, the infamous match was played between Spain’s Real Madrid and England’s Manchester United.

As this final is played just after teams pre-seasons tournaments and just before their respected leagues begin, either side took no joke to this sending out what could be considered their “A” squads to lift yet another trophy to start off the year.

Though Manchester United put up a worthy fight, it was Real Madrid who were the ones to come on top of a 2-1 win over the English side proving they are Europe’s champions yet again.

As any match in football, there is always much to take from a result and performance from either side. Here, we will be discussing what went wrong for Manchester United and dissect the goals conceded.

What United went with and how it panned out

José Mourinho’s Red Devils starting out using a formation very familiar to them in a 4-3-3. But what was unexpecting to see was the interchanging of that and a 3-5-2 hybrid. 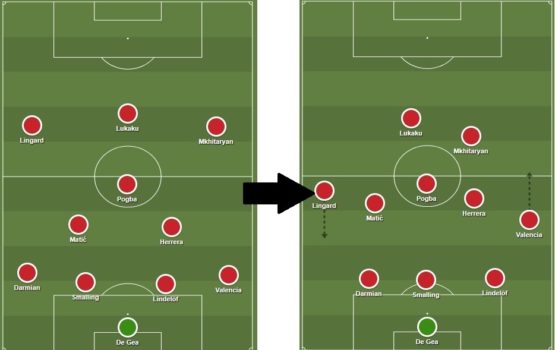 Allowing players such as Antonio Valencia to progress forward but come back to defend, and Jesse Lingard to drop down in a more.

Though this seemed to be hopeful at times and create some chances, it didn’t take long for the pressure and tempo to be set by Real Madrid, causing some anxiety on Manchester United’s end.

At first, pace and speedy buildup were tried by both teams on the pitch but for United, all it did was help Madrid when they decided to press and pressure the English side.

As soon as this was done, United began to sit back and allow Real to control almost everything throughout the middle and set the tempo back for themselves. Resulting in the first goal to be granted.

Though this was no wrecking or dominating win on the scoreboards, Real Madrid played Manchester United to a near perfect degree and used their weapons exactly how they should have.

Having most of the possession in the match, it is the tactical virtuoso of Zinedine Zidane’s midfield that caused the most problems for United, resulting in both goals conceded.

Leading up to the first goal was a simple concept consisting of possession and control from Madrid’s middle. With the tempo and mechanics coming from that of Toni Kroos and Casemiro while Isco roamed up top, causing Manchester United to pay most attention to him.

For the 5 minutes leading up to Real’s first goal, possession belonged to them. Constantly movement, passing, and chances were created as United sit back to allow this to happen. A red flag when playing Madrid.

As seen above just moments before the opening goal, Real’s Isco is confusing United’s defence to the point where no pressure is added until the last possible second. As Isco sees an opportunity and acts almost instantly, it isn’t until a poor cross shoots into the box for Chris Smalling to make an even poorer clearing header. 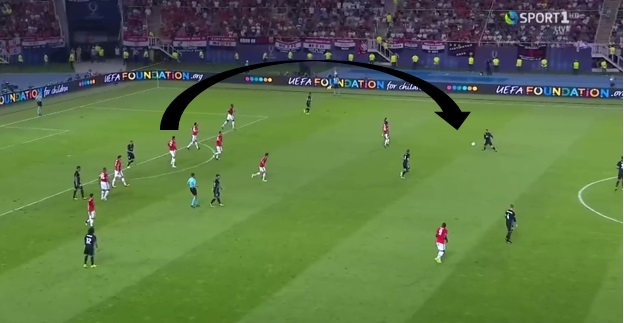 And who is there to recover the cleared ball?

None other than Dani Carvajal, inevitably so as almost the whole United side had compiled up to defend another dispossession of the ball. But give a player like Carvajal time, space and few targets in a sea of Red and he will most definitely be accurate.

When United decided to sit back and allow Real Madrid to get even more comfortable on the ball was their first mistake. Once this happens, a goal was almost written in the stars for the Spanish side.

Real Madrid’s second goal was based around similar aspects to that of the first.

As the second half began, Madrid came out almost exactly where they left off, with the same amount of pressure and pressing to cause dispossession and overturning of the ball on Manchester United’s end.

This time, it was the movement and ball control of Karim Benzema that allowed Isco to find the space in front of United’s back line, only to craft a give-and-go pass with Gareth Bale then creating a 1v1 with David De Gea.

Things began to change within the game as Mourinho brought on his pace and attacking force in Marcus Rashford and Marouane Fellaini.

As play started to build revolving around the two substitutions, it was thanks to Nemanja Matić for what turned out to be Romelu Lukaku’s first competitive goal.

As said earlier, there are always positives to take from a match, friendly or competitive. And there is no doubt that Mourinho put out what he thought would be the best squad against a tough opponent for the first piece of silverware of the season.

For someone to say there are no positives to look at even from a poor performance is like wrong in the sense that there is always something to take out from something.

Manchester United played a tough opponent but never once got completely dominated on the pitch. It was the urge for pace and pressure sensed from Real Madrid which caused the overturning of possession or lack of finishing. To be able to play well against such a side is obviously a task in itself and not an easy one.

Of course, there are always ways, looking back, on which United could have addressed problems earlier to better their chances. In some ways, the approach United took only resulting in Real toying with them to the point of conceding goals or maintaining possession. But key players made key moves and impressed once again.

Pre-season tournaments and cup finals always help shape what could be or will be, of the campaign to come. For Manchester United, this summer has been yet another big one with the additions that have been made. Players, new and old, have been notable and the future of the 2017/18 season looks extremely bright.