As the buzz and excitement from the opening weekend of the Premier League season carries over to match-day 2, an impressive looking Manchester United look to take on a rather distraught Swansea City FC.

The beginning of the season has treated both teams completely different, almost as if opposite sides of the spectrum.

For Manchester United, things could not have turned out more perfectly in the sense of shutting out a rather poor West Ham side, in an amazing 4-0 victory. A great way to start the campaign off; made up of a debut brace for Romelu Lukaku, followed by a goal off the bench from Anthony Martial and to top it off, a superb finish from Paul Pogba.

Quite a differing result for the Swans, although they didn’t face a defeat, their opening match consisted of a 0-0 draw against Southampton. With very little creating chances and only 4 total shots-2 on target- for 90 minutes of play, Swansea seemed content to only take 1 point back home.

With 2 very different teams meeting this weekend, here is a quick tactical preview on what to expect. 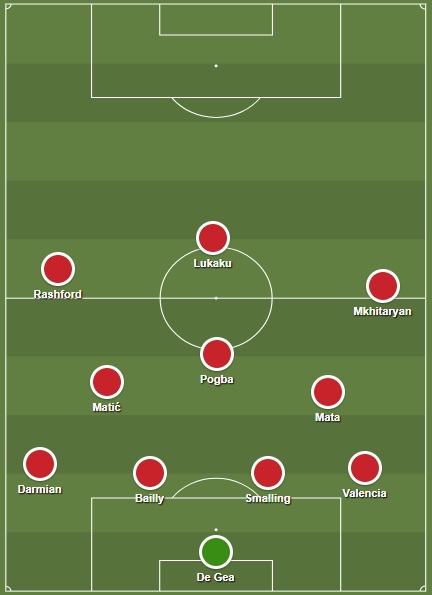 Much like the formation and lineup of last week, it seems best for the Red Devil’s to take a similar approach in order to take advantage of Swansea’s weaknesses.

With a slight change of just Matteo Darmian at left-back instead of Daley Blind. Making this change allows for a bit more of pace and movement up the flanks. Although Blind played a notable game against West Ham, it was arguably due to the non-threatening Pablo Zabaleta who “assisted” Blind in working up the sideline.

This game could also be considered an experimental match for José Mourinho’s side, taking advantage of a team who will have to retransform without a key player in Gylfi Sigurðsson.

Nonetheless, with a full strength Manchester United side up against a tainted Swansea City, the hopes are high for Mourinho’s men.

Having said that, the match will seem to go in Manchester United’s favour.

With the loss of Gylfi Sigurðsson, Swansea loses a major part in their attacking field. For multiple seasons, the Icelander has racked up the stats both for his team and for himself. Always in the ranking for most assists, Sigurðsson has been such a vital piece for Swansea.

With his recent move to Everton, what Swansea will lack now is the creativeness in the middle of the pitch in order to take a hold of opportunities in the final third. And with no real set-piece master, the chances seem to be slimming for the Welsh side.

To benefit from this, Manchester United need to play an attacking style of football, keeping the pressure and intensity throughout the 90 minutes.

For example, Manchester United’s on and off the ball movement needs to be as crucial and valuable as the previous match against West Ham. Using the wider players as fulcrums; pushing off or dragging away defenders, making quick passes, and moving into open areas of space allowing the midfielders to push forward or fill gaps when needed. Pogba would once again benefit from this style allowing him to free roam in the middle and create the tempo for his side. Then being able to put one of his best assets to work, in completing and creating the most chances in the final third.

To not sound totally and completely biased on this one is a little difficult.

As strong as this side Manchester United has, this is football and anything can happen.

But when a team loses a key component in their system, it is hard to imagine an immediate bounce-back and drive for success. Due to such a big change, Swansea will have to look for other outlets of chance creating and forward thinking for attacking situations.

With United going into this game with a full tank of confidence in each player, they will look to achieve nothing less than the week prior.

As the 2017/18 Premier League season has finally begun, the excitement and drama are looked to be carried throughout the season.

With plenty of red cards, own goals and dream debut’s around the league, there is much to live up to in the upcoming weeks of the Premier League season.

As Manchester United come off an extraordinary win, facing a Swansea side who were lucky to call it a draw, there should be no doubt this match will start week 2 in high regard.

Though José Mourinho may have a proper game plan in mind or use this time to experiment his squad and tactics like he showed capable of in pre-season, fans and pundits alike will be looking for a repeat to what was an amazing start to a hopeful and bright season.