Well, if Jose doesn’t make mistakes I can’t really end up in the hot seat at Carrington soon can I? With impeccable squad selection and sound tactical prowess, Mourinho is back being the best manager in the League and his side sitting top of the League is a testament to his ability.

But this weekend’s opponents Leicester will be a toughest opponent we have faced yet and United have to be at their best to beat them, not that they haven’t been at their best. Like last week and the week before that my biggest decision as the boss will be choosing one of Martial and Rashford. Both have performed very well but I will not reveal who I chose to start right now. Read on to find the starting XI.

The man with the No.1 jersey is the first name on the team sheet as David De Gea mans the line once again. Dropping a goalkeeper with two clean sheets in two games won’t help my cause when I eventually send my resume to Mr. Woodward.

The defense will go unchanged for the second consecutive week as Valencia, Bailly, Jones and Bind start again. I will tempted to drop Blind considering his lack of pace against a pacey Leicester side but upsetting the balance is never good and I stick to my guns with the Dutchman. Valencia will have the toughest assignment this week as he goes toe-to-toe with Riyad Mahrez.

The midfield duo Matic and Pogba looks like the best in the League and no player has given me reason to drop them. The duo have hit it off and will be my men to defeat Ndidi and James in the battle for control of the midfield. A tougher ask then going up against Mark Noble and Roque Mesa but I trust them to get the job done.

Two of three behind the striker will be Henrikh Mkhitaryan and Juan Mata. The ability of the players to switch and cross amongst themselves is an x-factor for United’s attack. Mkhitaryan is racking up the stats as he already has four assists this campaign.

Now to reveal my decision. There has been a growing clamor to select Martial and I will finally concede and select the Frenchman in my starting lineup. Two goals and an assist in less than half an hour of play has seen Martial play his way into my starting lineup. His injection of pace after his introduction late last week triggered the blitz that swept away the Swans. Rashford has played extremely well but Martial has played better and so that’s why he starts.

Lukaku spearheads the attack and I back him to continue his goalscoring start to the campaign. 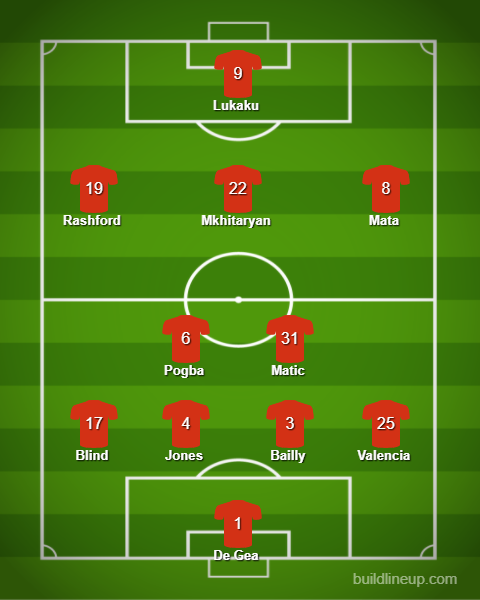 Substitutes: Romero, Darmian, Lindelof, Fellaini, Herrera, Rashford and Pereira. Yes, I am putting Pereira on the bench for this one. I would not let a player of his quality leave and he will see considerable game time this season.

So, folks that’s how my side lines up this weekend.

On to the boys on the pitch…..