Finally, the International Break is done with and I am glad I have all my players back without picking up any injuries during their time with their country. I can’t wait for the ball to get rolling at the Bet365 on Saturday evening with the joy at having known one of City or Liverpool have dropped points in their matchup.

So, without further ado, let’s jump straight into my lineup, shall we? 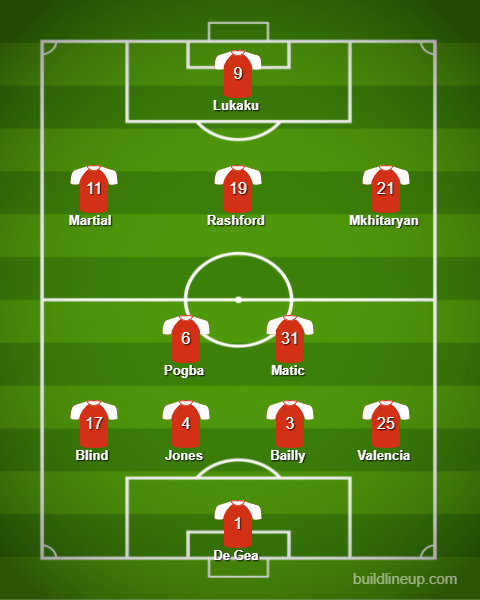 David De Gea retains his place in goal. The defence will remain the same as Eric Bailly, Phil Jones, Daley Blind have all played well together. I am glad to have Jones back without aggravating the injury he picked up against Leicester. He has been rock solid and to lose him with Lindelof yet to play a Premier League minute would have been tough. Darmian had a good outing against Spain with Italy but Daley was equally good for the Dutch.

Moving forward, I will play Nemanja Matic and Paul Pogba in a midfield pivot. They two already form arguably the most formidable midfield pairing in the League. It is tough to leave Herrera out once again but he will get his chances as the games have begun to come thick and fast.

The three behind the striker will be something we have seen only for a few minutes against Leicester. Rashford slots in for Mata giving United a front four of Henrikh Mkhitaryan, Romelu Lukaku, Rashford and Anthony Martial. Try stopping that. This is another decision I have given a lot of thought about as I now lose that youngster who can come in late on should the game be deadlocked to give the side a much-needed boost. Martial in the first two games and Rashford had done exactly that but I can’t keep the two out with the way they are kicking the ball at the moment.

The way these three lineup was a bit of a dilemma as well. Martial has been a beast down the left while Rashford has not done his reputation there any harm. He was downright awful on the right for the Three Lions before the switch to the left saw him emerge as the best player on the pitch that included the likes of Harry Kane and Dele Alli. So Mkhitaryan was so good down the middle up till now takes up Mata’s role down the right. Henrik will have full freedom to drift towards the centre giving Valencia space to gallop into all the while causing confusion in Stoke’s backline. Rashford starts down the middle as a second striker. This move gives Pogba more room to run into while attacking. Rashford and Martial can interchange between themselves and I am counting on the two to run the defence ragged.

Up front, the Stoke defence has to deal with Lukaku who has been in blistering form this season. I am pleased that the missed penalty has not affected him as the hattrick against Gibraltar and the winner to put Belgium on the plane to Russia showed. He will be in for a bruising afternoon given Stoke’s physical style of play but I can count on Rom to not back down. Expect him to be among the scorers once again for United.

That’s how my side will lineup this week against the Potters. Onto the boys on the pitch….