As the Premier League returns after the international break, Manchester United look to take on Mark Hughes’ Stoke City, who are coming off of a draw versus West Bromwich Albion last matchday.

The last time the two teams met was a remarkable one at that. Despite it ending in a 1-1 draw, history was made as Wayne Rooney had broken the Sir Bobby Charlton’s club record, scoring his 253 goals for Manchester United. What came off of a beautiful late free-kick from an off angle, all eyes were on Rooney who added to his legacy as a Red Devil.

Coming into this game, as Manchester United look to continue their momentum should have a very little challenge in this match. Although, Stoke took focus and beefed up their backline this summer in additions of; Kurt Zouma on loan from Chelsea, Bruno Martins Indi who was brought back but this time as an official signing from FC Porto, and a near deadline day signing in Kevin Wimmer from Tottenham Hotspur.

Though United’s history points to them having a successful run against the Potters, the Red Devils will be confident in taking all three points on Saturday and here’s how it could be done. 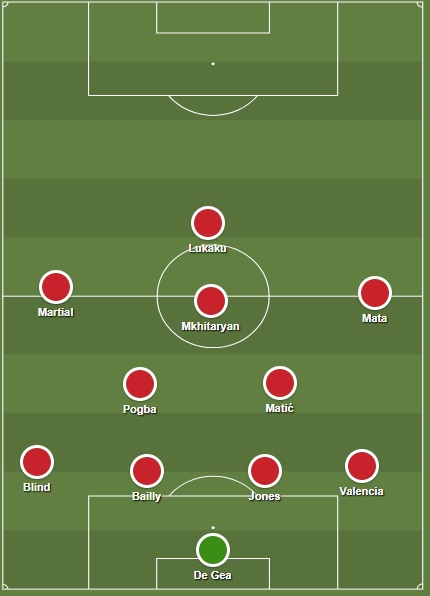 Manchester United should look to use the formation that has been complementing their squad and style the most. With a 4-2-3-1, allows Paul Pogba and Nemanja Matić to roam free and overlap in the middle, Henrikh Mkhitaryan’s creativity as a 10, the wingers being Anthony Martial and Juan Mata, and of course, the strong Romelu Lukaku up front.

With Mark Hughe’s following suit this season playing a 3 at the back, Manchester United could take full advantage no matter how forceful Stoke’s backline may be.

A key player for Stoke is captain, Ryan Shawcross, who takes charge in front of the goalkeeper and holds a strong line.

Displayed above, is a circumstance where Manchester United are building up the attack in Stoke’s final third. The key here would be to keep Shawcross. Something that under the new style of Hughes’ often happens on its own without much pressure from the attack.

Nonetheless, United should look to make sure this happens by keeping possession and pressing higher than usual.

In isolating Shawcross, the wingers would push wide as the middle drives up the middle in the captains preferred position. Forcing Shawcross to make the choice of following the unmarked man or dropping down to the player with possession. Either decision would leave the middle of the pitch open for enough time so the free man makes the run. If chosen to hold his guard and jockey the ball, this would only lead to a 2 v 1 attacking situation and evidently opening up space regardless.

Stretch out the backline & Use the flanks

As stated above, this game should be heavily focused on breaking down the Potters’ defence which Manchester United can easily do with their ruthless attack.

A weakness of not only Ryan Shawcross but the defense itself is when they flatten or get spread out by the opposition.

In this image, Manchester United are seen on the verge of an attack against Stoke City’s defense.

For this to work, it mainly relies on how hard and quick United press and move the ball forward up the pitch.

With the Red Devil’s dynamic attack and great use of the wider areas of the pitch, spreading the defense and forcing them into uncomfortable situations shouldn’t be hard to do.

As United push further up the pitch in the final third, aiming for a medium-high press, this would force the likelihood of a center midfielder to fall back and join his own defense. When forced to stretch is when Stoke finds themselves unsettled and often let the attackers slip through.

Manchester United should also look to spread not only the defenders but the play itself to the wider players on the pitch. With the speed and agility of Martial and the great off the ball movement by Mata, who could interchange with Mkhitaryan, Stoke will have trouble to reacting to such play.

In the next Premier League matchday, Manchester United are hosted by Stoke City at the bet365 Stadium. As the Red Devil’s look to keep the momentum strong in the 2017/18 campaign, as well as, their history against Stoke City, not much will stop them on Saturday. With a fully equipped squad, José Mourinho and his men can put up a perfect match in Stoke. Using the Potter’s weakness against them, United need to create a higher tempo of play in order to do so. Isolating and spreading the play will come of great use especially against head defensemen, Ryan Shawcross. If Manchester United can maintain possession and keep the press alive they are sure to make it through this game with flying colours, even during a rainy day at Stoke.