It’s finally back at Old Trafford and I can’t wait to make my (virtual) Champions League bow in the Old Trafford dug out. With just over 72 hours since the disappointing draw against Stoke, the players will surely be focused to get that feel good factor back.

David De Gea starts in goal. Yes, Sergio Romero will be my man between the sticks in the domestic cups. I was inclined to start Romero but with both Jones and Bailly missing I want to retain De Gea holding things in front of him and avoid making too many changes at the back.

As mentioned, Bailly and Jones serve the final matches of their suspensions against Basel. With Rojo injured, I will naturally select Smalling and Lindelof from the start. So an Old Trafford debut for the Swede defender. He will be up for the fight and I am sure he will put in a solid night of work. The pair looked shaky against Madrid in the Super Cup but with all due respect, Basel are not the two-time Champions League winners.

Valencia starts on the right side of the defence and Blind comes in on the other side. Darmian was guilty of not getting close to his man which led to Stoke’s opener on Saturday so he drops out and will be used as cover for multiple positions. Blind enjoyed a decent start to the campaign and he returns to the lineup.

Mourinho went for the 4-3-3 against Stoke and it did not work and by the time he took out Herrera and returned to the 4-2-3-1, it was too late. I advocated using the 4-3-3 earlier on but I have seen it work, or rather not work.

Matic and Pogba form the midfield pivot once again with Pogba given a free reign and Matic mopping up at the back.

In front of this dynamic duo, we have Mkhitaryan in the No.10 role. He was shunted out to the right and was not nearly as effective as he was before the International break. Mkhi returns to his favoured position. Rashford gets a break and Martial begins on the left. On the right, Mata returns to rekindle his partnership with Mkhitaryan.

Lukaku starts ahead of this front three like he has done all season. His pace and strength will be key to breaking down the Basel side expected to sit deep and play on the counter.

You will remember Basel famously knocked out United from the Champions League group stages six years back. Incidentally, that group also contained Benfica.

On the bench, I have Romero, Darmian, Shaw, Herrera, Carrick, Rashford and Lingard. Injury to any one of the centre halves will leave me short handed with only Carrick and Darmian having previous experience of playing in the role. 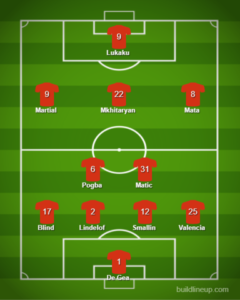 Onto the lads on the pitch…..