As league football resumes its action this week, several clubs around Europe take part in one of the sport’s biggest competitions; The Champions League.

Coming off of an unfortunate draw against Stoke City on the weekend, Manchester United took on the Swiss side, FC Basel, in matchday 1 of the Champions League group stages. With goals from Marouane Fellaini, Romelu Lukaku, and Marcus Rashford to help the English 3 big points and a great start to the competition. 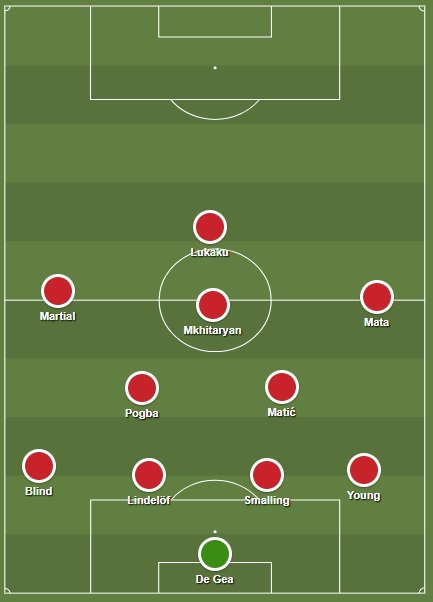 José Mourinho switched the squad up quite a bit for this match but with good intentions, seeing Victor Lindelöf, Chris Smalling, and Ashley Young all make their season debuts.

This formation and squad lacked very little compared to Basel’s starting XI. Adding speed, creativity, and height Mourinho and his men dominated possession and in the attack in just about every way possible.

The first half saw a very quick start from Manchester United with attempts on goal within the opening minutes, making it clear how United was beginning to play.

Long balls and crosses became United’s major form of attack and unlike previous matches, this seemed to be working for them quite well.

Unfortunately, after a good start and not even half way through the first, Paul Pogba left the pitch injured resulting in Marouane Fellaini taking his place.

Crosses on the right side came from a number of players, as the height of the team seemed to play as an advantage once again. Causing threat after threat, as Basel could not compete with the stature and strength of the English side.

Throughout the process of attack, Manchester United played in a distinct way that even after Basel began to figure out their strategy, it still worked in their favour. Consistently obtaining the ball in the middle and playing it out wide to Young on the flank, as Juan Mata and Henrikh Mkhitaryan, intertwined and overlapped. In doing so, they created enough off the ball movement to drift Basel’s defense apart.

At this point, Romelu Lukaku and Marouane Fellaini would make runs into the 18-yard box hoping for a delivery from and a prime opportunity.

In the image above is a representation of Fellaini’s goal for United. A great example of what is explained above.

As Pogba was replaced by Fellaini, the midfield hadn’t lost much. The partnership of Fellaini and Nemanja Matić, much like that of Pogba and Matić, provided the availability to move up and stay behind during the attack.

In this instance, Fellaini drifted into the box, creating another threat for Basel, as United had played out to the wing. From there, Young had created a split opening for himself to cross it into the box, hitting the Belgian perfectly.

The second half started in opposite fashion of the first, giving Basel the chance of a hasty start.

What looked like a shaky United coming out of the gun, Basel took advantage, creating some chances of their own on some sloppy Red Devil plays.

But it wasn’t long before Manchester United snapped out of their daze in what resulted in another goal for the English side, this time coming from another Belgian, Romelu Lukaku.

In recent time, a Manchester United side that is up 2-0 would step up and park the bus normally allowed the opponents to gain momentum in the attack.

However in this match, United continued to play and create the tempo even once Basel began to step on the gas.

Maintaining possession in the middle became more of a priority for United as Basel would press forward and hard in an attempt to distract or force errors on the back, which they executed well.

Manchester United had created a mid-high block as they continued to attack which sometimes lead to them being caught on a break by the Switzerland side.

But to make things even better, Marcus Rashford came on as a super substitution and seal the deal, making it 3-0 with no time left for Basel.

In the Champions League match-day 1, Manchester United showed Old Trafford 3 points as they defeated FC Basel 3-0. Showing dominance and determination, the Red Devil’s controlled the game in almost every aspect to pull off a good start to the competition.

A strong and boastful performance was a must for Manchester United in their first game back into the Champions League in 2 seasons. With a great start to the Premier League, it was only right to continue their run into Europe’s biggest club competition to prove why they belong back on top.