This weekend, as the Premier League takes action, Manchester United will be hosting Everton FC at Old Trafford. A matchup between the giants of José Mourinho and Ronald Koeman’s newly enhanced archetype.

Both teams partook in mid-week action in their European competitions respectively; Manchester United defeated FC Basel 3-0 in the Champions League while Everton got a rough start in the Europa League trailing 3-0 against Italian side, Atalanta.

In the English campaign, Everton had what seemed to be a great summer of signings and business. Although losing the striking bully in Romelu Lukaku to Manchester United, they gained the creativity and security that they seemed to have lacked in recent years. Bringing in the talents of Jordan Pickford, Michael Keane, Davy Klaassen, Sandro Ramirez, Gylfi Sigurðsson, and last but not least, Wayne Rooney.

On paper, Koeman’s side lacks very little and are a clear upgrade from what the team presented beforehand. But as the season has started, what seemed to be improvements has only made the team lack what is most important, chemistry. And Manchester United have the tools to exploit them with the best of their abilities. 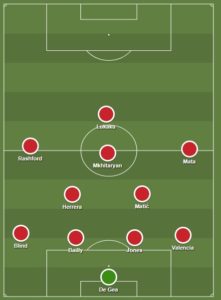 Using the formation that seems to be the perfect fit for Mourinho’s squad, the 4-2-3-1 would be best to execute a tactical plan against the Toffees. With a hamstring injury seeing Paul Pogba out for what could be up to six weeks, Mourinho should look in the light of Ander Herrera for to partner up with Nemanja Matić. Though he may lack some of the creative free roaming characteristics in which Pogba possess, he plays the role of a double pivot well enough to maintain a tempo in the middle.

As the Champions League squad saw the Portuguese manager make quite a few changes, not much strategically will have to change for United for this match.

Much like what was produced out of a stunning performance last season, Ander Herrera could be used as a special weapon against Everton.

The last time Manchester United met Chelsea, Herrera was appointed the task of not only covering but man marking the biggest threat of the opposition, Eden Hazard.

Similar to this game, Herrera could destruct Everton’s midfield to the point where all their fluidity and play making would be hard to create, specifically for the Toffees new main source of vision in Gylfi Sigurðsson. 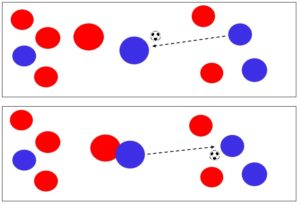 During the game, Manchester United should take focus on the movement and creativity of Everton’s newly stacked midfield. In doing so, cutting off all angles of passing, open movement, and chance creating would tremendously run down the attempts made by Everton. Without their attacking building from the middle, the Toffees will struggle and start relying on the drop back from Rooney or Ramirez to move the ball forward which will only add to them lacking in the final third.

Pressure on the backline

On the attacking front, Manchester United have full advantages over the likes of Everton. With speed, strength, and aerial abilities the Red Devils should have no problems when he comes to the opponents final third.

Normally, a Koeman side would play with a very compact shape while dropping deeper and restricting the amount of space the opposition has in order to follow through with an attack.

In order to get past Everton’s backline, they will have to produce pressure and width to make it easier upon themselves in the final third.

Manchester United should look to attack as a force. Creating a high-pressure attack, obliging the Toffees to drop deeper into their own final third and enabling them to keep their compact shape. Using the flanks as a fulcrum to bring defenders out wide, then slipping past the open spaces where Everton’s backline has created gaps in their fallen form.

Once exposed, United could reset their attack to use their flanks as more than just a distraction or simply play through the middle for Lukaku to power his way to the goal.

As Manchester United take on Everton this weekend in the fifth matchday of the 2017/18 Premier League season, an easy win and tally of three points look to add to the Red Devils run at the top of the table. Although what seemed to be a busy window for the Toffees, Ronald Koeman’s squad has not fully lived up to the expectations set this past summer.

Since the beginning of the season, Everton’s weaknesses have been displayed by all four teams they have played in some form or another. With the strength and well-rounded capabilities of Manchester United, the exploiting of the Toffees will only look to continue.