Liverpool were without Sadio Mane, so Jurgen Klopp brought Emre Can into the midfield, alongside Henderson and Wijnaldum. Philippe Coutinho played on the left, with Roberto Firmino coming back into the side as the nominal striker.

Jose Mourinho sprung a bit of a surprise, naming a back four when widely expected to play with a back three. Matteo Darmian came in at left-back; he has been Mourinho’s preferred choice in games where the Portuguese wants to shut down the opposition. This meant that Ashley Young moved to the right flank, playing as an orthodox winger. Eric Bailly was injured, so Chris Smalling came in to partner Phil Jones at the back.

Rarely does Jose Mourinho play open, aggressive football when away against a rival, and this was no different. While United may have nominally lined up in a 4-2-3-1, it was soon apparent that they were primarily looking to stop Liverpool from scoring, rather than try and take the game to them. Matic and Herrera were deep, protecting the centre backs and only moving forward to close down when the ball was played into the Liverpool midfield. Mkhitaryan also came deep when Liverpool had prolonged spells of possession. The wingers, Ashley Young in particular, were taking up positions normally seen from fullbacks, with the actual fullbacks tucking in and forming a de-facto back five for United when Liverpool had the ball for prolonged periods. The images below shows this perfectly – 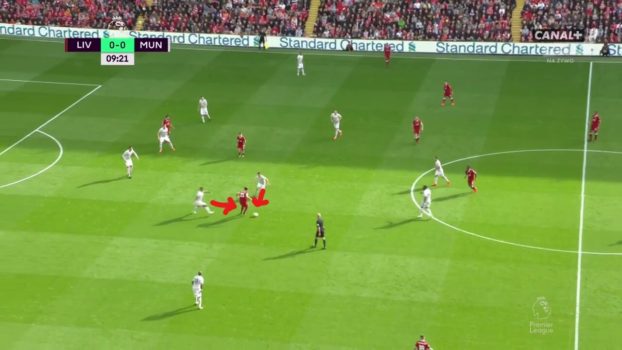 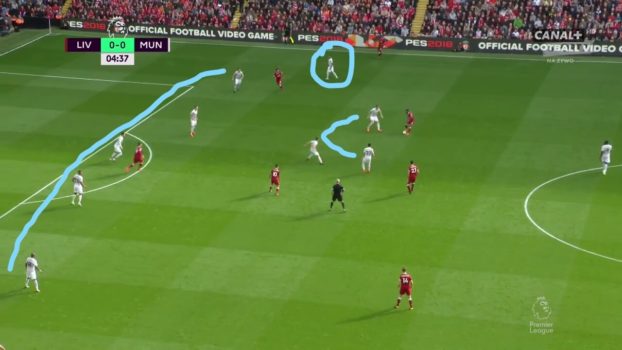 Coutinho roaming, United mark him and others –

Coutinho moved out to the flank in Mane’s absence, with Klopp going for three central midfielders to guard against the Manchester United counter-attack. He was on the left only in name, as he consistently came inside to receive the ball and try and combine with Firmino and either Wijnaldum or Can. While this was expected, what was notable was the way in which United defended against this. Mindful of the threat Coutinho poses from range, United quickly closed him down whenever he received the ball within shooting range, while Antonio Valencia and Ander Herrera took turns to mark him. Valencia would stick tight to Coutinho when Liverpool had the ball deep and tried to counter, and would pass him on to Herrera when Liverpool tried to pass the ball around patiently and Coutinho moved inside. This did limit his influence, and at one point in the first half he popped up next to Joe Gomez on the right flank to try and escape Herrera’s attentions, playing a ball over the top to an offside Salah. Coutinho did manage to create a couple of half-chances in the second half, but his withdrawal towards the last quarter of an hour was tacit admission that United’s tactic had worked. Both instances of United’s marking are shown below – 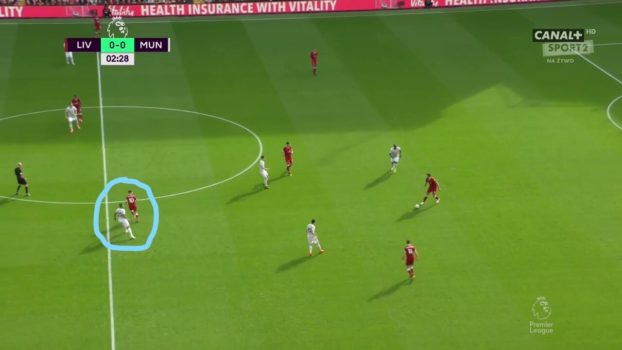 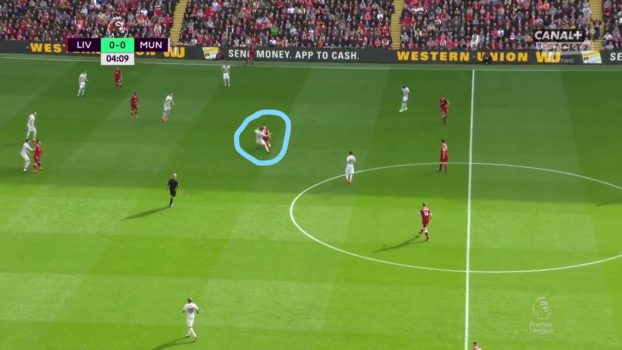 On the opposite side, Mohamed Salah was also being tightly marked by Matteo Darmian. Darmian is naturally right-footed, and this, combined with Mourinho’s instructions over the last year have turned him into a competent defensive full-back on the left. He rarely ventured beyond the half line, except on one occasion when sprinting to try and tackle Salah on the turn, which is shown below. He generally stuck tight to Salah, and the Egyptian tried to get away from this in a similar manner to Coutinho, coming inside and allowing Firmino or Wijnaldum to drift outside. Wijnaldum had a shot on goal in the 14th minute from such a move, where Salah had gone central and Wijnaldum got a little bit of space coming in from the right. However, Liverpool’s front three were not fluid enough and United coped with their sporadic interchanging comfortably. 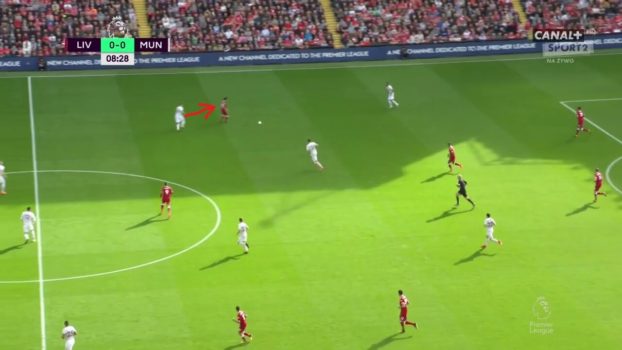 United’s rare attacks were down the right –

Coutinho’s movement inside meant there was acres of space for Alberto Moreno to move forward into, and the Spanish fullback did not need a second invitation. However, Ashley Young picked him up superbly throughout the match, and he was rarely in a position where he had the space to cross. This also meant that on the rare occasions United attacked, they did so by targeting the space behind Moreno, with Lukaku also drifting into that channel to combine with Young. However, United’s wingers and midfielders were usually too deep and their passing was wayward, which meant that most attacks came to nothing. Indeed, they only had one shot on target the entire match, although Lukaku should have done better than shoot straight at Mignolet.

This overall pattern of play stayed consistent throughout the game, with United dropping deeper as the game wore on and tiredness set in. Matic, in particular, looked exhausted by the end, but Mourinho had no recognized central midfielders on his bench, a fact he alluded to in his post-match comments. Mourinho’s substitutions in bringing on Rashford and Lingard were designed to inject a little more energy and possibly take advantage of any counter-attacking opportunities. Liverpool’s substitutions betrayed their lack of an alternative plan, and Klopp’ side were once again frustrated by defensively compact opposition, albeit one which will not be expected to play this way too often this season.