Benfica gave a European debut to Mile Svilar, who became the youngest goalkeeper to play in the Champions League. Raul Jimenez started upfront, with top goalscorer Jonas surprisingly left out.

Manchester United made four changes from the side that drew away to Liverpool, with Lindelof, Blind, Mata and Rashford coming into the side.

Benfica play high and compact, United try to catch them out:

From the very start of the game, Benfica played an extremely high line, standing about 10 yards behind the halfway line, with Fejsa sitting in front of the defence and the rest of the side in a compact block to deny United any space. This ploy worked fairly well throughout the game, with Henrikh Mkhitaryan especially unable to get any space to influence the game. United tried to beat the high line frequently with sharp angled passes down the flanks; United’s attackers were caught offside thrice in quick succession within the first ten minutes from such passes. However, all three were marginal calls, and the danger for Benfica was that eventually one of those runs would succeed. United continued this approach throughout the game, but a combination of brave defending and badly timed runs meant that it did not pay off. A couple of those instances are shown below, in which Benfica’s high defensive line can be seen – 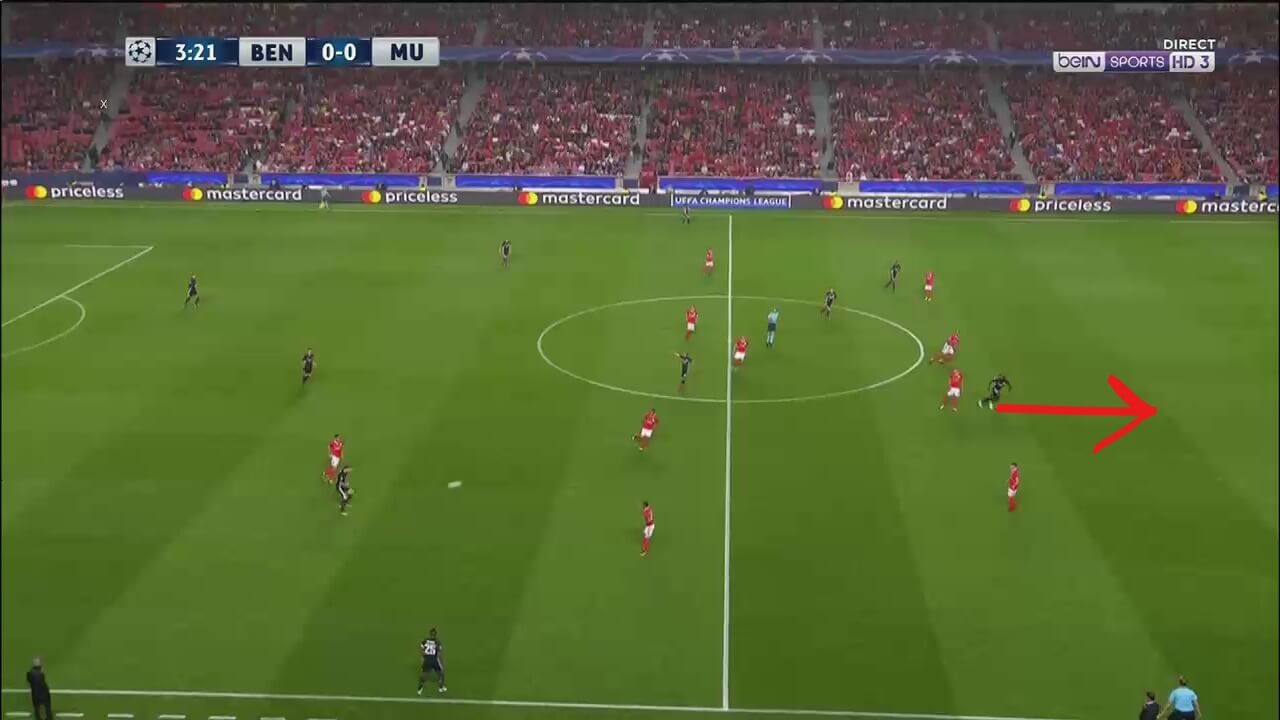 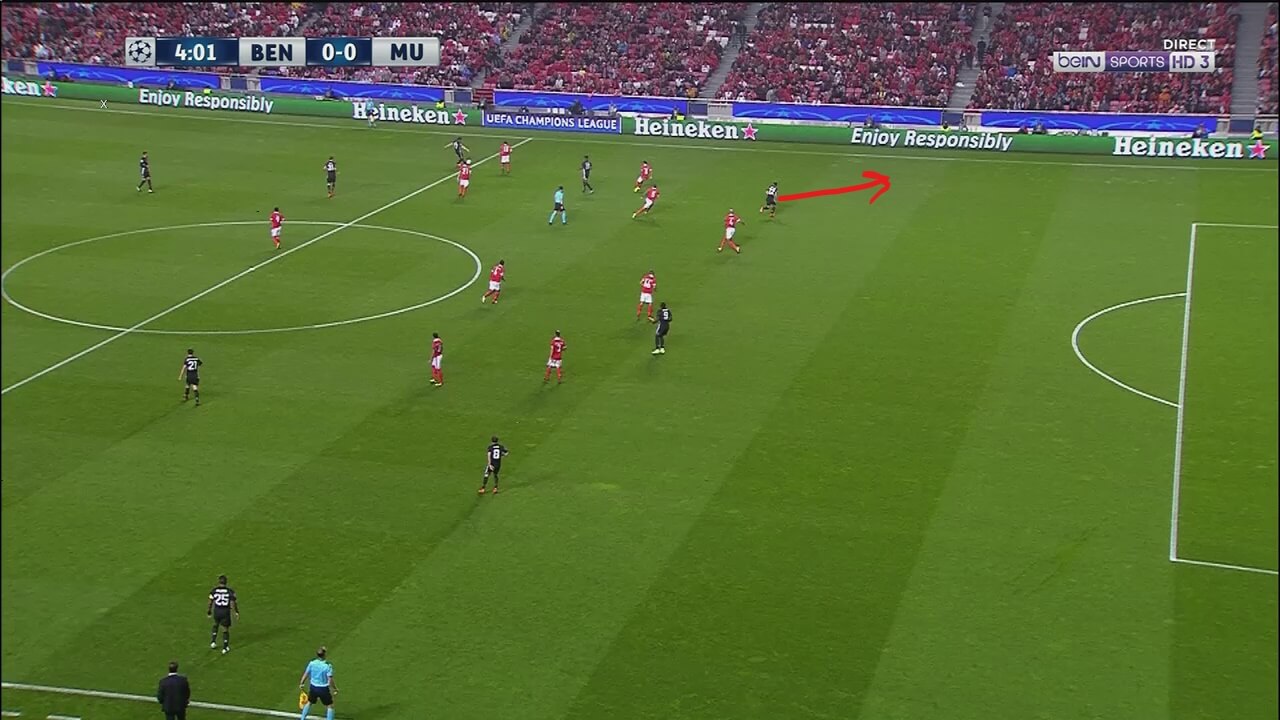 Ljubomir Fejsa had a good game, playing a disciplined role in front of Benfica’s back four. This was crucial, as combined with his side’s overall shape and pressing, it did not give United’s attackers any time in central areas. Mkhitaryan was soon forced to drift out to either flank to try and combine with the wingers, as he was being given absolutely no space in his favoured area. Fejsa shuttled from side to side to counter this as well, and this was a superb, disciplined display from the Serbian. Benfica’s shape and Fejsa’s positioning can be seen in the images below- 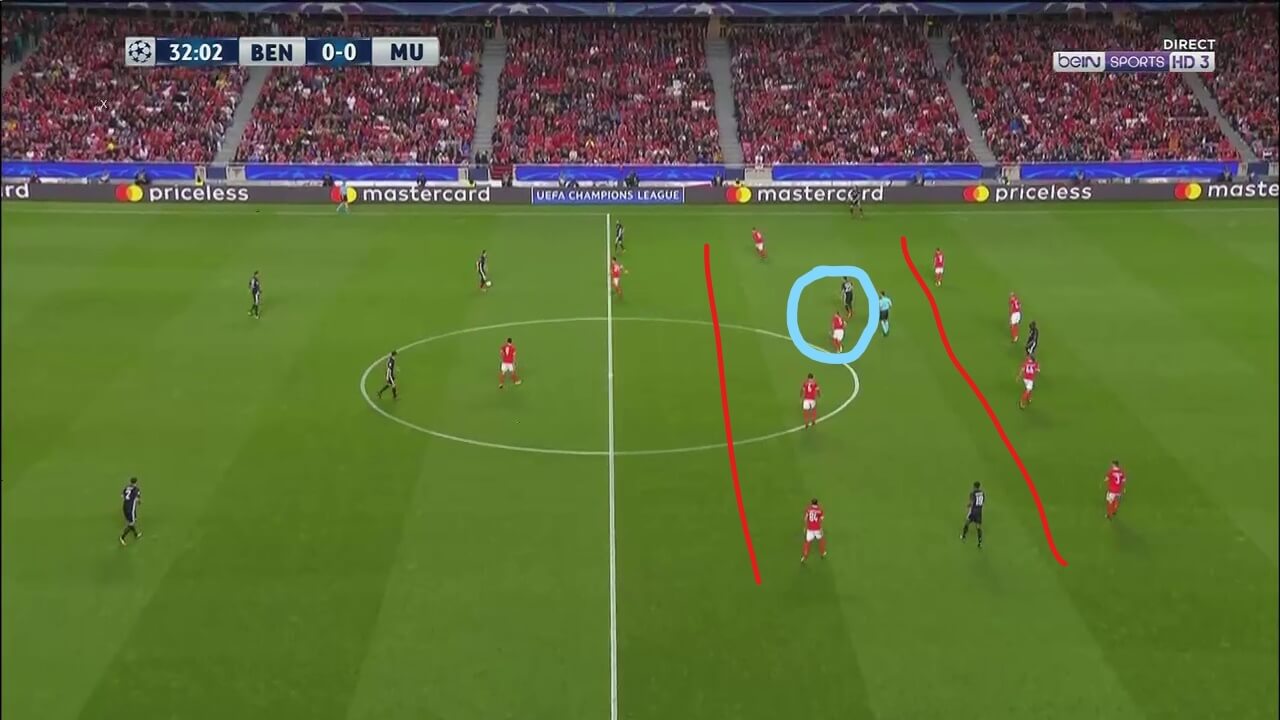 United’s best attacking moments came from out wide, especially down the left. Around the half hour mark, Blind and Lukaku had crossing opportunities in quick succession from the left towards Rashford, which were defended well by Benfica but showed where they could be caught out. Blind stayed wide on the left, providing width to try and stretch Benfica’s lines, while on the right, Valencia was more circumspect, rarely bombing forwards. The second half saw Rashford make a couple of direct runs at the Benfica defence, and the goal also came after Mkhitaryan had been fouled on the left, Rashford sending a swerving shot from distance that Svilar, who had looked vulnerable under aerial balls all night, could not deal with, carrying it over the line.

The aforementioned Benfica tactics made it difficult for United to create chances. Henrikh Mkhitaryan lost possession 21 times during the game, the most of any player, which illustrates United’s lack of threat centrally. Herrera and Matic did not break forward enough, with a rare Matic foray forwards leading to him shooting straight at Svilar in the first half. United seemed to miss Paul Pogba and his ability to break through the opposition lines with a dribble, as well as his creativity from deeper in midfield. This would have been especially useful in such a game, where Mkhitaryan was ineffective.

Benfica did not have too many opportunities of note, with David De Gea barely tested in the United goal. However, their best attacking moments came from direct balls played into the channels towards Jimenez, who would drift to either side between the centreback and fullback, and from Alex Grimaldo charging forward from left-back. He made a couple of such runs in the first half, and the second of these produced a half chance for Salvio. His aggressive positioning, combined with Mata’s tendency to drift inside, meant Valencia could rarely overlap and get forward down United’s right.