Huddersfield lined up as expected, with fit-again striker Steve Mounie only on the bench.

Ashley Young returned to left-back for Manchester United. Henrikh Mkhitaryan was rested, which meant Jesse Lingard started, and Chris Smallling and Phil Jones continued their partnership at centre-back in the absence of Eric Bailly.

Huddersfield press in midfield, compact off the ball

Huddersfield, under David Wagner, were promoted to the Premier League while playing an aggressive style of football, which involved pressing their opponents high up the pitch. They have found it difficult to play in the same manner in the top flight, and have adapted this style somewhat. Saturday’s game was no different, as Huddersfield sat off Manchester United, allowing their centre-backs time on the ball. They would initiate the press only when the ball was played into midfield, a strategy which did yield the first goal. A couple of images from the first half illustrate this point: 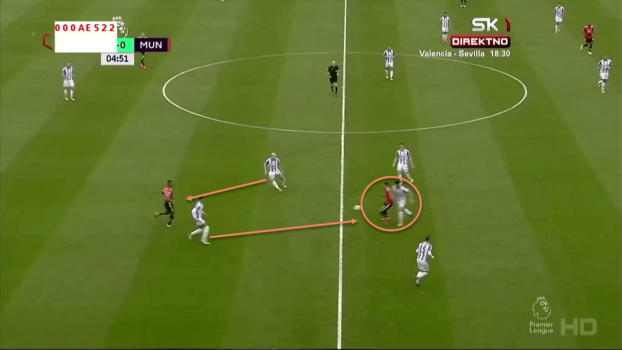 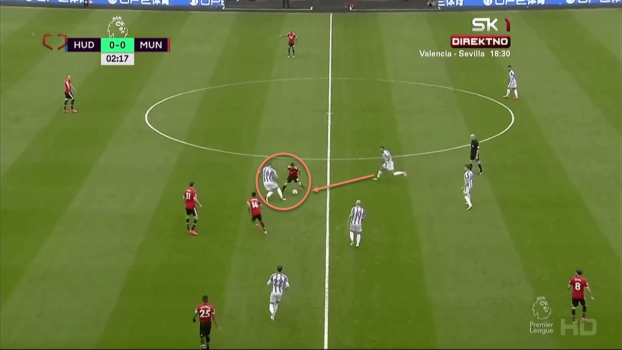 Huddersfield maintained a solid, compact shape without the ball, starving United of space between the lines. United struggled to play through Huddersfield’s midfield all evening, and their best opportunities came from direct passes into the channels for Lukaku, or from crosses from out wide. Huddersfield’s shape is shown below: 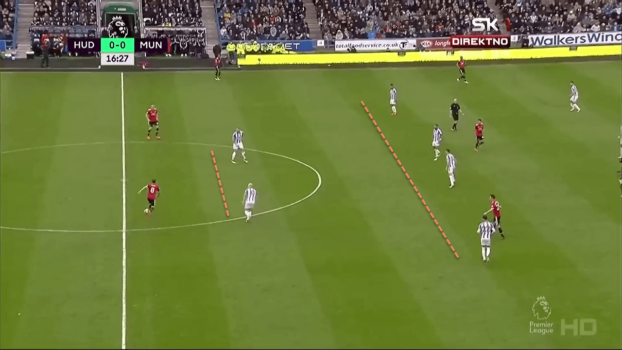 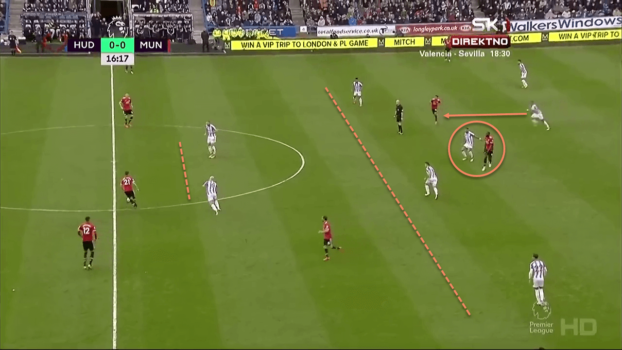 In the image above, Lukaku is being picked up Williams, which means that Lingard suddenly has space. However, Zanka is frantically sprinting to close him down, while Mooy and Depoitre’s positioning means that Herrera would find it very difficult to play the pass to Lingard anyway. This is just one example of Huddersfield’s defensive positioning and work-rate, which was exemplary throughout the game.

Phil Jones, who has been the outstanding centre-back for United so far this season, went off with an injury midway through the first half. He was replaced by the Swede Victor Lindelof, who has been gently eased into the side by Mourinho, and on this evidence, it was easy to see why. He was too passive for Huddersfield’s opener, allowing Aaron Mooy to run at him and then was easily deceived by Tom Ince’s trickery, while for the second goal, he missed an easy header which allowed Depoitre to go through on goal. That five minute spell was what took the game away from United, and Lindelof was quite literally at the heart of it.

Lack of creativity for United

In what is becoming a worrying trend, United were again devoid of any creativity from midfield. Mourinho’s selection was partly to blame here. He rested Mkhitaryan, but played Jesse Lingard in the #10 role and Juan Mata wide right. While Lingard is a capable footballer, he does not possess the kind of creativity to allow him to play behind the striker, and this also meant that Mata kept coming inside to try and affect play. This meant that United lacked width, which played into Huddersfield’s hands. A couple of issues with this are highlighted below – 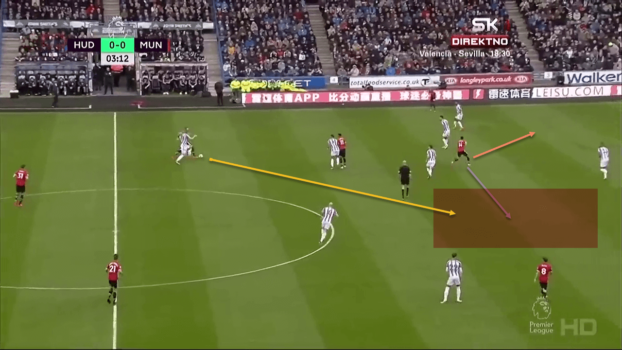 Lingard makes the wrong run here. As a natural winger, he tends to drift towards the flanks when played centrally. In this situation, however, there is acres of space between the Huddersfield midfield and defence, and a run into that space would probably have been easier for Jones to spot and pass towards as well. It is a run which Mata would have probably made, had he played in the #10 position. 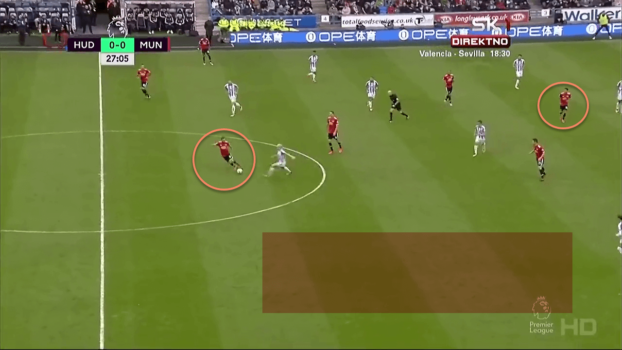 Mata was caught in possession for the Huddersfield goal, but the problem was that he was forced to drop deep in order to get onto the ball. When played wide, especially without a competent #10, Mata struggles to influence the game. His movement into the centre needed to be complemented by Lingard going out to the right, to drag defenders out of space. However, Lingard stayed central most of the game, choosing the wrong run most of the time, which crowded the central areas and meant United were toothless when playing through the middle. 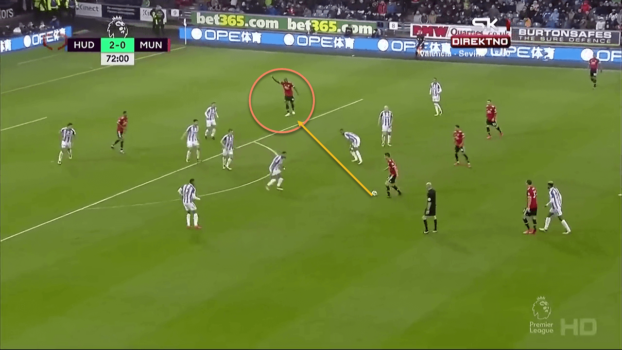 Here, Lukaku has managed to find space in the box. He is onside, and the right pass would have found him with a shooting opportunity. However, Herrera chose to ignore him and instead played the ball out to the right flank, from where a cross was eventually easily dealt with. United’s dependence on Pogba, and Mkhitaryan to a lesser extent, to break through opposition lines of defence is coming to the fore in recent games. Michael Carrick was missed as well; his ability to circulate the ball at a high tempo, as well as pick out players in space with intelligent through-balls, would have been ideal against this Huddersfield side.

United only a threat when playing direct

As a result of the aforementioned absence of midfield creativity, United were only threatening when they went direct. Within the first five minutes, Valencia and then Matic had played passes into the channels for Lukaku to chase, the second of which drew a save from Lossl. Ashley Young also got up the left flank well all game, but his final delivery into the box was not good enough. United’s goal also came from a kick out from De Gea, which found Lukaku isolated against a Huddersfield centre-back for the first time all game. He rolled out to the right, accelerating into the space behind the left-back and eventually crossing for Marcus Rashford to head home at the far post. While being able to play this way is a useful alternative, the lack of quality passing means that United become increasingly dependent on crosses and hopeful balls forward, which was the problem last season with Zlatan in the team. United need to be able to come up with a way to break down deep defences in Pogba’s absence, or else this season could quickly go downhill.