Jose Mourinho rolled out a back three for the first time in the Premier League this season, after having deployed the system in the midweek League Cup win over Swansea. Eric Bailly returned from injury to partner Phil Jones and Chris Smalling at the back, with Ashley Young continuing his recent renaissance at wing-back. The midfield pair stayed the same for the third consecutive league game, while Rashford partnered Lukaku up front.

Spurs dropped Eric Dier into the defence, and Davinson Sanchez to the bench. Harry Winks started at the base of midfield, and in the absence of Harry Kane, Son Heung-Min played as the nominal striker.

Spurs under Mauricio Pochettino have been one of the best in the league at pressing intelligently and winning the ball back in dangerous areas. Such a strategy was expected from them, what was a surprise was to see United pressing high and aggressively throughout the game. Rashford and Lukaku would press the centre-backs, with Herrera often charging forward to close down the player in possession high up the pitch as well. For Spurs, Alli and Son would press the United centre-backs intermittently, dropping off to cut off passing lanes to the midfielders after the initial press. This contributed to a frantic, error-strewn game, with neither team able to get time on the ball, and a distinct lack of clear-cut chances. 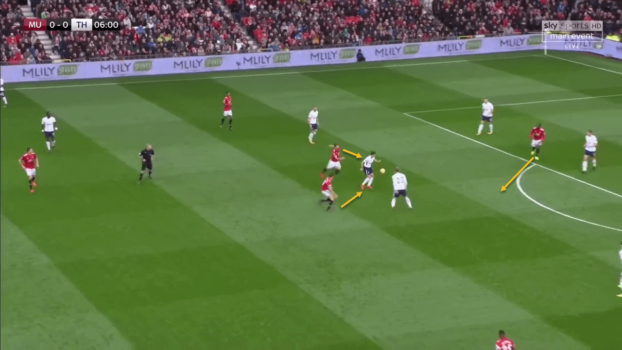 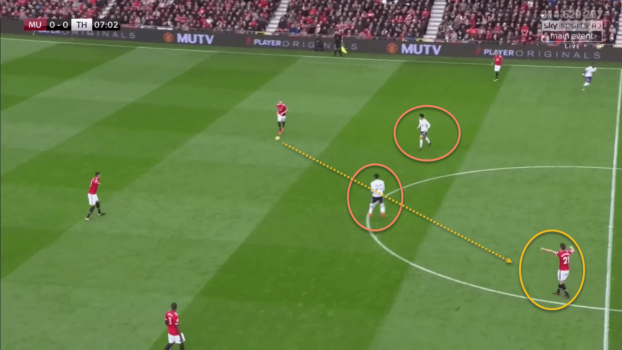 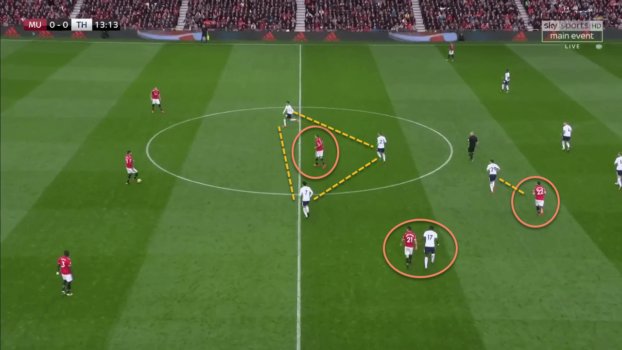 In a match between two teams playing with some variant of a back three, the space is always invariably found out wide. There is usually a spare man in defence, while the midfield is congested. However, the wing backs are the only players who have space to run into, especially during a switch in play. This was borne out in Saturday’s game as well, especially down United’s left. Ashley Young motored up and down the pitch, defensively solid while providing a few good crosses into the box from out wide. Serge Aurier, his direct opponent, made a couple of dangerous runs during the game but was not found by his teammates. He was largely subdued in an attacking sense, pinned back by Young as well as Marcus Rashford’s movement to the left. Antonio Valencia did not enjoy as much freedom down the right, perhaps due to Son Heung-Min drifting into the left channel on multiple occasions. 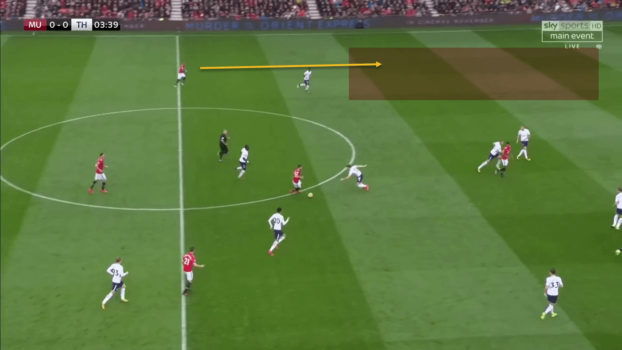 The set-up of both teams meant that the onus of creating something lay on their creative midfielders. For United, that was Henrikh Mkhitaryan, who had another poor game. The Armenian was constantly in space, especially during the first half, due to the nature of United’s positioning and Spurs’ press: Matic and Herrera would drop deep to receive the ball, dragging Sissoko and Eriksen with them, which gave Mkhitaryan room to turn past Harry Winks, the deepest of Spurs’ midfield trio. But while he did well to engineer such situations, once in possession of the ball, United’s #22 consistently made the wrong decision. One promising counter-attack went to waste because Mkhitaryan chose the wrong option to pass to, while on another occasion, he played a simple pass straight to Eric Dier. While the current set-up of United’s midfield, in Pogba’s absence, does not suit him, he needs to improve his performance, with Juan Mata a potential candidate for his place. 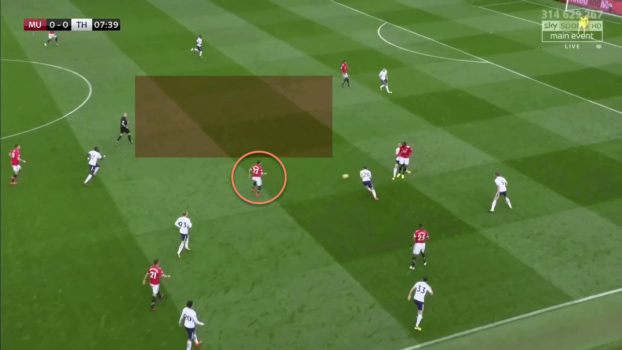 For Spurs, Christian Eriksen had an extremely quiet game. Perhaps surprisingly, he was playing alongside Sissoko in the Spurs midfield, rather than behind Son and Dele. This limited his influence on the game, as he was harried and frequently dispossessed by Herrera and Valencia. The Dane was unable to create space for himself in a congested midfield, and rarely managed to link up with his forwards. It is a testament to his quality, that despite such quiet game, he still managed to create the outstanding chance of the match for Dele, minutes before United’s decisive goal.

Route one the route to goal again for United

United scored with the simplest of moves: De Gea took a long, flat kick out towards Lukaku, who flicked it on for the substitute Martial to run onto and finish past Lloris. This followed a similar goal against Huddersfield last weekend. While most people may assume direct football is aimless, hoof it up to the big man football, there are subtle nuances which United have been getting right. De Gea’s kicking has been outstanding; his kick for the goal was flat and accurate. Secondly, Lukaku usually peels into the channels to receive such passes, to allow him to turn and run or flick on to a more central player. This is exactly what happened; Lukaku drifted out to the left to receive De Gea’s kick out while Martial took his place centrally. Direct football has been and will continue to be a useful weapon for United this season, and for all that Pep and Klopp may complain about such tactics, Jose Mourinho is simply playing to one of his squad’s strengths.