The biggest surprise of the evening was that David Luiz was dropped from the squad entirely by Antonio Conte, amid rumours of dressing-room unrest. Andreas Christensen started instead, and N’Golo Kante made his long-awaited return from injury.

United lined up with the same team and system that beat Tottenham at Old Trafford the previous weekend.

Chelsea lined up with three central midfielders, as opposed to United’s two. With Hazard given license to roam and Mkhitaryan not doing enough defensively, Chelsea dominated the midfield zone. Kante would drop deep to shield the zone in front of his centre-backs, often shuttling to the sides as well to cover for his wingbacks when United countered. This allowed Bakayoko to get forward, and he did so a number of times. The Frenchman should have scored in the first half, when a half cleared cross fell to him, unmarked, on the edge of the area. Nevertheless, his bursts from midfield were not tracked by the United midfield, and he caused them problems throughout the game. Additionally, Cesc Fabregas was given too much time on the ball, and he ran the game, picking out Morata and Hazard on a number of occasions with passes from deep. Hazard drifted centrally as well, which meant that United were often outnumbered 4-to-2, as Mkhitaryan would rarely come back to help his midfield. The Armenian had yet another poor game, contributing nothing offensively, and negligent in his defensive duties. Herrera would push up to try and close down the man in possession, but Chelsea’s numerical superiority in that zone meant that it was easy for them to keep the ball. 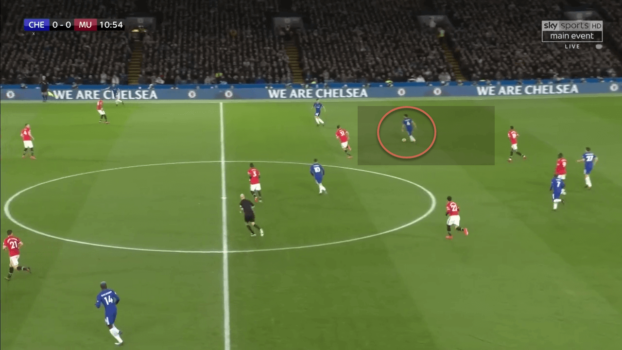 Fabregas dropped deep throughout the game, and had a lot of space to play passes out wide 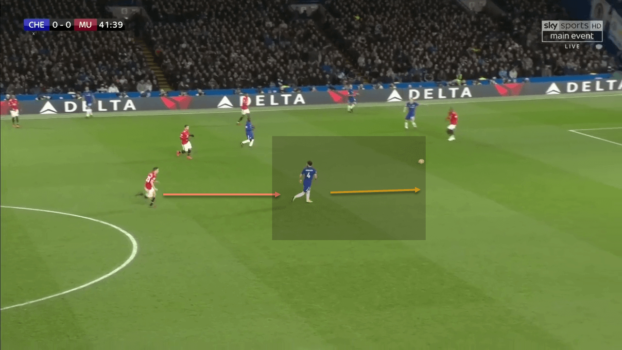 Herrera tries to press Fabregas, who has acres of space. Bakayoko is not even in the frame; he’s already made a run forward to join the attack 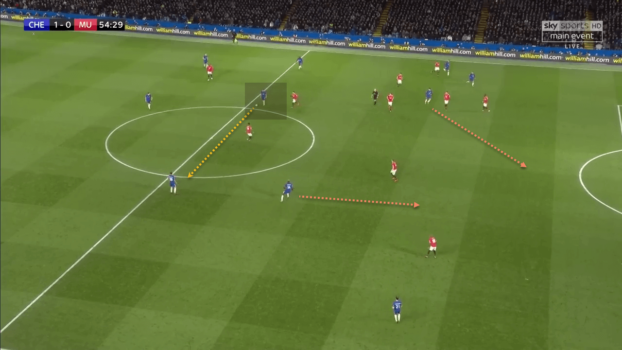 The buildup to the goal: Fabregas again has room deep in midfield to play the ball to Azpi. Bakayoko’s forward run draws Jones in, leaving oceans of space for Morata to run into

One of the predominant subplots to this game was the battle between the two number nines: Morata and Lukaku, who could have presumably lined up on opposite sides if the transfer window had gone differently. Both came into the game with lengthy barren streaks in front of goal, but it was Morata who came off better with a stunning header to win the game for Chelsea. Morata ran the channels extremely well all night, dragging United’s centre-backs wide to create room for Hazard. He held the ball up reasonably well, and his link up play with the Chelsea midfield was also quite good. Lukaku, on the other hand, was completely isolated; the fact that he did not have a single touch in the Chelsea box tells its own story. He did roll his man and shoot straight at Courtois early in the first half, but that was as good as it got for the Belgian. He did not hold the ball up well at all, and the Chelsea centre-backs were fairly comfortable against him and Marcus Rashford. Rashford needed to peel off into the channels a lot more, but both United strikers stayed fairly central, playing into the hands of the three Chelsea centre-backs. As an aside, Morata’s goal was created by a cross from deep by Azpilicueta, who now has five assists in the league; all of them for Morata. 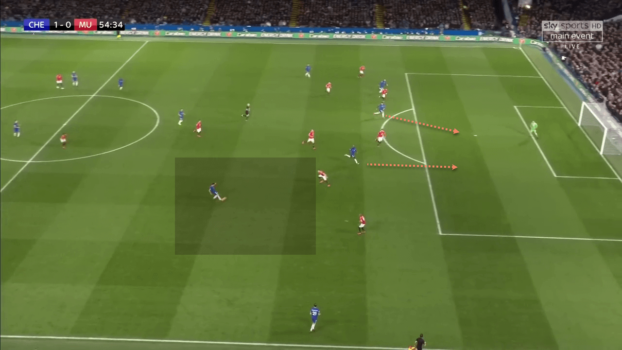 Jones is now trying to cover Morata, because the United midfield haven’t shifted across enough. Smalling gets attracted to Bakayoko, which leaves Morata unmarked to head home

Mourinho brought Fellaini on from the bench, and United had a couple of opportunities late in the match. However, this game was lost in midfield, and Mourinho needs to rethink his strategy for games like these, especially with City now eight points ahead.