Marco Silva made just one change from the side that beat Newcastle 3-0 at St. James’ Park; Christian Kabasele coming in for Miguel Britos. Will Hughes continued his recent run in the side with a third consecutive start, while Marvin Zegelaar played in spite of a broken nose after a clash with Andy Carroll a couple of weeks ago.

Jose Mourinho switched to a back three, with Marcos Rojo making his first Premier League appearance since April, and Jesse Lingard playing in support of Romelu Lukaku and Anthony Martial.

United too open in midfield

Paul Pogba’s return to the side had brought back a level of control to United’s play, especially in midfield. However, in spite of the Frenchman starting here with Nemanja Matic, United were far too open in midfield, especially in the opening 15 minutes of the game. Pogba was frequently too far ahead of the ball, which meant that Matic was isolated, with nobody to pass to. 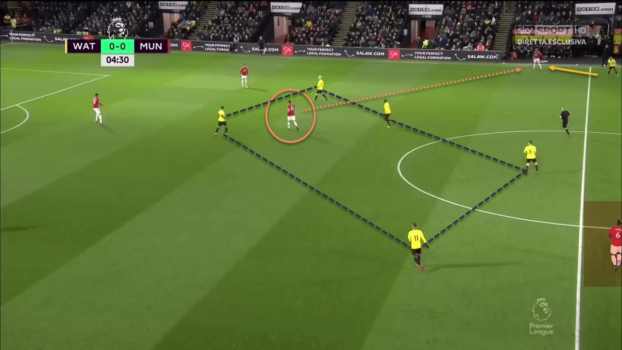 Matic is completely isolated here, and has three Watford players in close proximity. His only passing option is Ashley Young, who is also liable to be pressed by Kiko Femenia. Paul Pogba is on the edge of the image, nowhere close to offer support to his midfield partner. 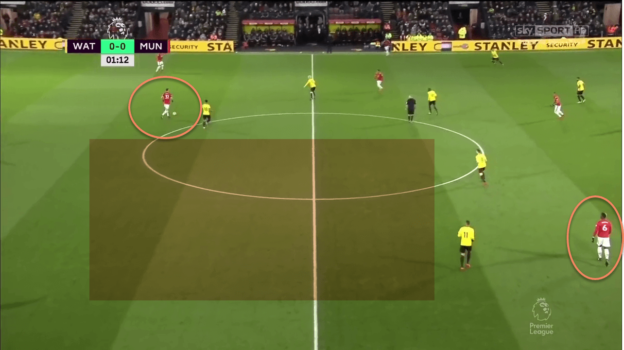 Here too, Pogba is too far forward. Matic’s only realistic options are a pass backwards or to Young, while the space vacated by Pogba can be stormed into by two Watford players if their team wins the ball.

Matic had a poor game, giving the ball away on multiple occasions and getting caught out of position up the field for a number of Watford counter-attacks. Pogba, too, struggled to influence the game, at least in the initial stages, as he ventured too far forward, rather than carrying the ball or passing from deep. Jesse Lingard’s inclusion did not help in this regard; while Juan Mata or Henrikh Mkhitaryan would have dropped into midfield areas to pick up the ball, Lingard stayed high up the pitch. In a tricky away game such as this, the need of the hour was to sit deep, at least in the opening minutes, and dictate the tempo of the game. Instead, both of United’s midfielders left massive gaps in the middle, as can be seen in the images above.

While United suffered due to their own indiscipline, credit must also go to Watford, and especially to Will Hughes. The Englishman was playing on the right only in name; in truth he was popping up all over the attacking third, creating overloads in central areas as well as on the left: 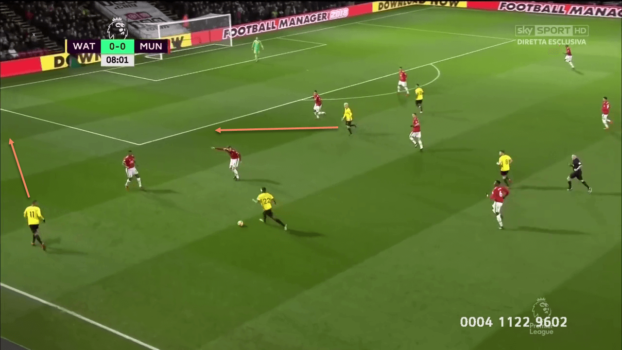 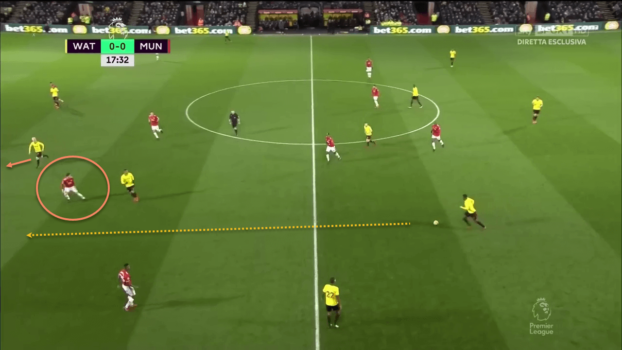 Hughes has drifted across, ready to make a run towards the left touchline. Richarlison, coming deep and narrow, manages to drag Lindelof out with him, which creates the space behind Valencia for Hughes.

Hughes, and Richarlison to a lesser extent, were coming into central areas when United had the ball. This had a two-fold effect – they were able to shut off passing lanes through the centre, while maintaining numerical superiority when they won the ball back. Hughes made a number of runs from the centre out to the left flank, combining with the Brazilian, and United may have been more severely tested had they not taken a rapid two-goal lead. The fact that United had less than 40% of the ball when they scored the second goal tells its own story. 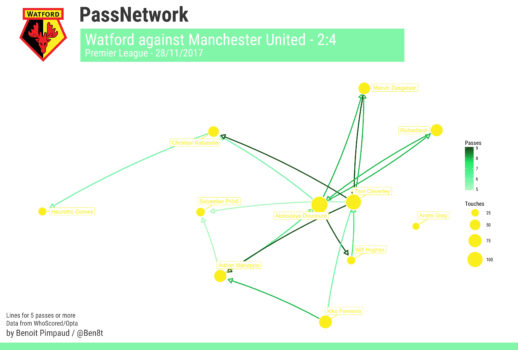 Note Hughes’ positioning in this map, almost as a third central midfielder, while Richarlison is out wide on the left. The right flank is open for Femenia to run up and down.

Hughes’ positioning, in turn, left the flank open for Ashley Young, with Kiko Femenia his only direct opponent. Indeed, the Spaniard got up the pitch on a couple of occasions in the first half, with one cross just narrowly evading Richarlison. Young was able to do the same as well, and won his running battle with two superbly taken goals. While the second was a brilliant freekick, his first goal was a neat encapsulation of his night: he rifled the ball in from the edge of the area after Femenia was unable to control Jesse Lingard’s pass. The fact that he was so far up the pitch, and got the better of his direct opponent, sums up his night.

Lingard and Lukaku were interchanging positions the whole game, with Lukaku playing on the right while Lingard took up central positions, especially when Watford had the ball. His work rate and flexibility are good attributes for the role he needs to play in this formation, where a lot of hard running and pressing is needed from the attackers. As noted above, while Lingard’s selection did detract from United’s ability to control the game, it did pay off in an attacking sense, as Watford’s three centre-backs had to constantly deal with three forwards, and the threat of any of them running beyond the defensive line. None of Prodl, Mariappa or Kabasele are especially quick, and they stayed relatively deep to try and counter United’s pace. Lingard scored a fine solo goal to kill off the match, and his positioning was crucial to making United tick in an attacking sense. 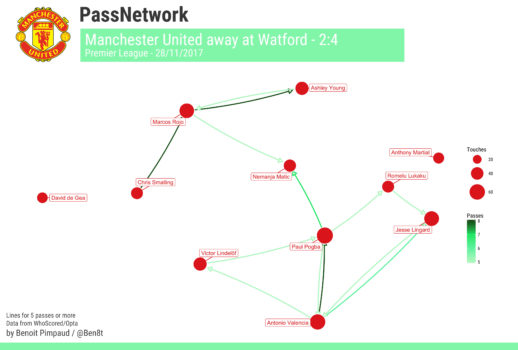 As the image shows, Matic did not even make 5 passes to Pogba in the entire game, or to any player for that matter, illustrating how bad his night was. Lukaku, Martial and Lingard interchanged quite a bit, while Pogba too did not have a large influence on the game, as can be seen from his touches and pass map.