Alexandre Lacazette was a surprise starter for Arsenal, appearing to have been ruled out of the match entirely. The rest of the team lined up as expected.

Manchester United also had a surprise selection, as Nemanja Matic recovered from injury to start in midfield. This meant that United’s side was unchanged from the one that beat Watford 4-2 at Vicarage Road

United devastating on the counter

This United performance was a throwback to Sir Alex Ferguson’s template for beating Arsenal: be compact, physical and hit them on the counter. United’s approach to the game was undoubtedly aided by the early lead they took, but their ruthlessness was apparent for both goals. After Koscielny’s pass was intercepted by Valencia, he stormed into attack, and a simple one-two with Pogba was enough to get him into a shooting position, from where he drilled a low shot into the corner. The second goal was a result of Lingard’s pressing, and here too United were quick to attack once the ball was won, with a few rapid passes putting Lingard through to finish. United repeatedly scythed Arsenal apart with their quick passing and movement, and the third goal came when an Arsenal attack broke down on the edge of United’s box. One pass to Lukaku, who flicked it to Lingard, and suddenly United were storming up the pitch. Pogba’s shimmy away from Koscielny was exquisite, and Lingard had an open net to tap into. Arsenal had 75% of the ball and took 33 shots, yet came away with nothing, and this display from United was one of controlled aggression and clinical finishing, which has arguably been the template to beat Arsenal for a decade. 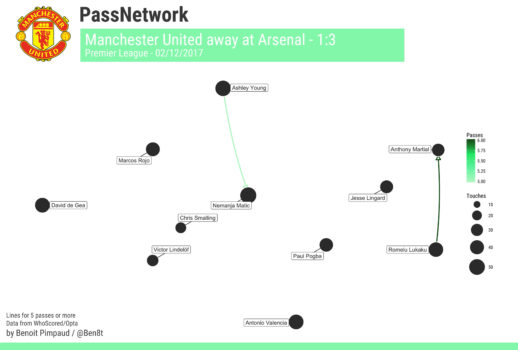 United’s passing network tells its own story. Ashley Young and Nemanja Matic were the only players to pass to each other at least five times in midfield, while the linking up between Martial and Lukaku is quite evident; Lukaku proving to be a competent focal point.

Lingard’s brace here, along with his goal in midweek at Watford, simply reinforced his image as a big-game player. He has previously scored goals away at Chelsea and in all of his Wembley appearances for United, but his performance at the Emirates was about a lot more than just his goals. Lingard was arguably the leader of the United press, hounding the Arsenal backline repeatedly; it were his attentions that forced Mustafi into giving the ball away in the lead up to United’s second and Lingard’s first goal. He was penalized for a foul minutes later on Granit Xhaka, in a similar position to where Mustafi had lost the ball, while he dropped into midfield as a third central midfielder to hold the lead, as the image shows below – 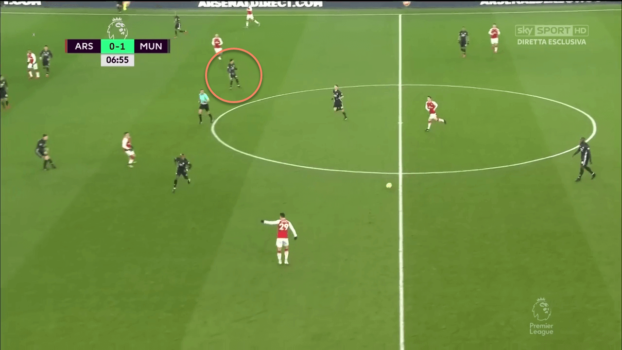 His was a performance of controlled aggression and discipline, and such attributes could be crucial for the Manchester derby, especially with Pogba now suspended for that game.

Arsenal didn’t do much wrong here, but a combination of defensive errors and woeful finishing cost them the match. They were able to play around and through United on a number of occasions, notwithstanding the Red Devils’ intention to sit deep and soak up pressure. Mesut Ozil had a fine game again, dropping deep and pulling wide, thereby dragging Lindelof all over the pitch with him. This was opening space up for Alexis Sanchez and Lacazette, who could presumably have scored a hattrick in this game. Aaron Ramsey’s bursts from midfield were sporadic; the one time he got ahead well was to set up Lacazette’s goal. All in all, while United were definitely ruthless, Arsenal had only themselves to blame for not getting more out of this game, even with David de Gea’s performance in United’s goal.