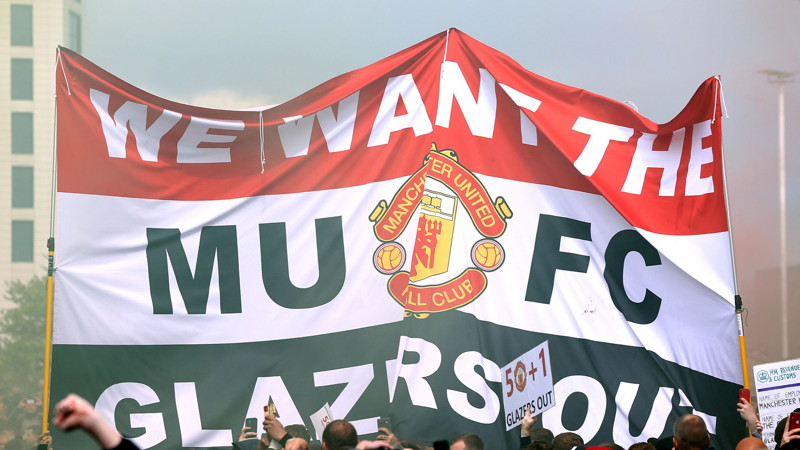 Manchester United vs Liverpool has been postponed. United fans came out in their thousands, protesting against the current ownership of the football club. Due to a lack of security, such numbers posed a major threat to the safety of the event. The game was due to kick off at 16:30 at Old Trafford, but fans managed to get onto the pitch and subsequently the game was delayed before a full postponement.

Manchester United fans have protested in previous years, notably in 2010 with the ‘green and gold’ scarves and shirts becoming a statement of fans disgust at the ownership model, and their desire to get the American owners out of their football club.

Questions will now be asked about the approach Manchester United made with their security numbers. This protest had been circulating for weeks on social media after outrage due to the Glazers full leading support of the Super League.

Yesterday’s events will be perceived as a job well done for United fans, sending a blatant message to the ownership. Getting a Premier League fixture called off is a hard feat, but to get a game of this calibre, which many believe is the biggest game in English football called off, is an illustration of their own success.

However, despite this, fears will remain that this won’t bother the American owners, who’s business style approach to running the football club hasn’t faded since their arrival in 2005. It’s perceived that as long as the money is still coming in, the Glazers won’t sell. This especially as due to United’s worldwide fan appeal, and major commercialistic branding, revenues are incredibly high for the historic football club, which unfortunately for fans, means it’s unlikely that it’s an asset that the Glazer family will want to let go. However, fans hope that by getting such a high calibre fixture called off, the Glazers will be alarmed by this, and see the fans unrelenting ambition, thus considering letting the club go in response.

In 2005, Manchester United was bought on debt by the Glazers. Since then, the debt has been allowed to gradually rise, with United now in over £450m debt. Equally, the Glazers have been incredibly keen at taking consistent dividends and other finances out of the club, which has steadily built up to over £1 billion taken out.

This combined with an inefficient hierarchical structure, has caused such fury to bubble up and thus the supporting of the Super League was fans’ final straw. However, commercially, the Glazers have significantly strengthened United as a marketing product, which could be argued helps fund new signings. Despite this, due to the lack of the Glazer’s own funding into the club, fans feel they are taking advantage of the club’s prosperous finances.

Ultimately, the increasing debt, consistent dividends and inefficient structure has driven fans to breaking point, which has resulted in such a protest and postponement occurring.

This leaves Ole Gunnar Solskjaer’s men still sat in 2nd place in the Premier League table, 13 points behind local rivals Manchester City. However, the 20-time league winners have a game in hand.

Leicester are four points off United with Chelsea six behind, but United have a game in hand on both. Liverpool sit outside the European spots in seventh, one point behind West Ham United, and only two points ahead of Merseyside rivals Everton.

With five games left to play, Solskjaer will be hoping to retain second and safely secure Champions League football, without the last day drama of the previous season.

Liverpool next play Southampton at Anfield.