PES Predicts is taking on the FA Cup! Monday night’s clash between Chelsea and Man Utd is the showpiece fixture of the Quarter Finals and I’ve taken to PES 2017 to try and find a winner.

Trying to select the teams for this was difficult, though we do know Ibrahimovic is suspended. I’ve put Rashford in up front, though it could just as easily be Martial or Rooney. So we’ll just see what happens. I’ve also left Chelsea full strength, I mean they’ve pretty much won the league and they have no Europe. So why wouldn’t they? 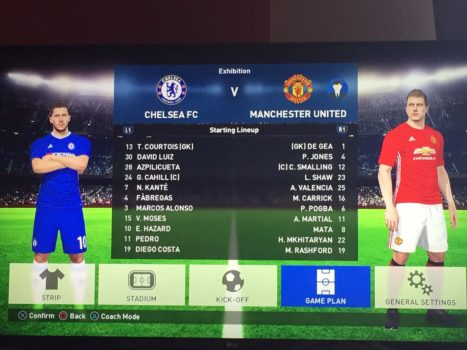 Chelsea kick us off. Beglin identifies Courtois as the key man, “he commands his box and rarely makes mistakes.” He must be expecting a busy night for the Belgian. Fabregas plays one of his typical passes to get Costa in behind, he pulls it back to the arriving Fabregas who slashes it wide on his weaker left foot. That was all too easy though. Rashford is being eaten up by the three centre halves at the minute, and it’s 0-0 after 15.

Mkhitaryan has a half chance but he heads wide from about 15 yards. It was a long way out. Then Mata cuts back onto his left but his shot is straight at Courtois. Oooh but Chelsea should be ahead. Costa gets slipped in behind again, and from a tight angle De Gea saves with his feet. It drops invitingly for Pedro who steers a shot wide from the edge of the box with the goal gaping. A bad miss to complete a goalless half an hour.

Man Utd’s turn to have some pressure now and this is a great save from Courtois to deny Martial. Maybe Beglin was right? He gets played in down the inside left and his shot across the keeper is palmed away. There’s no further action to finish the half though, and it’s goalless at the break.

Drury questions who is ready to go for it. Well, I’d wager Man Utd don’t want extra time. Whether their PES counterparts know this or not remains to be seen. Another top save! Hazard gets in and his powerful shot forces De Gea into a one handed parry away. Jones scrambles it clear. Down the other end, Mata flashes a shot just wide. It’s been a good game this, just needs a goal. Moses is off for Willian. Mkhitaryan has another chance, but on his left he curls it wide. A good move though as the clock ticks past an hour.

Costa thinks he has scored but there’s a Chris Smalling on the line to clear! He dropped in behind De Gea when Costa got free, it’s smart. Here comes Matic, for Alonso, which I don’t really understand. Whatever it is, it hasn’t worked! Rashford gives Man Utd the lead, and they probably deserve it on the balance of play. Martial plays a great ball and Rashford gets between Luiz and Cahill and smashes it home. Scenes in the away end, and only 9 minutes for Chelsea to find a response.

Man Utd are keeping the ball really well, seeing it out. But Chelsea have one chance left. Pedro does really well to beat Shaw, he slides it across and Costa taps home. Chelsea are level! No they aren’t, the offside flag is up. Costa looks incandescent. He always looks sort of mad but how he’s really mad. Oh well. Stamford Bridge is angry but the time is running out. It has ran out! Man Utd advance to the Semi-finals!

This was a pretty good game, I hope the match on Monday is as open as this but it rarely is. Both teams played some nice stuff but only one (legitimate) goal in the end. But don’t worry Chelsea fans, it’s only PES.