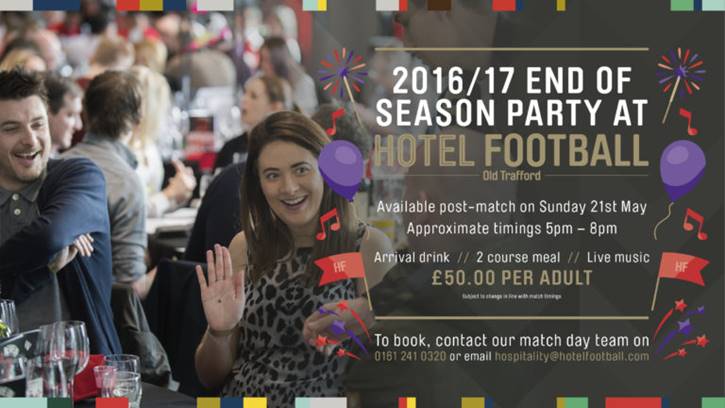 Sure, everyone is thinking about the Europa League after last night, but I have a sneaky feeling that United might get a top four place as well. Could you imagine the look on Arsene’s face?

Big Sam and Palace are the visitors, and with everything still being a little bit unpredictable at the top and the bottom of the Premier League who knows what might be at stake?

It’ll be nice to Wilf Zaha back at Old Trafford, once again showing the form that saw him move to United in the first place and, no doubt, Jose will give some of the younger squad players an early chance to stake their claim for next season.

Our partners over at Hotel Football are wrapping up the Premier League season in style, with an end of season celebration that’s not to be missed.  It is your opportunity to mingle with other fans after the final home game of the season against Crystal Palace. The party will be hosted in the prestigious Stadium Suite, with a 2-course meal, along wit a complimentary glass of fizz and live music entertainment.

*This package does not include a match day ticket*

So, get yourself on this right now and be involved in watching United qualify for the Champions League and wave the boys off to Europa League glory against Ajax!