In an exclusive piece for ManUnited.uk we have been able to get Sparta Prague’s commercial manager, Ondrej Eisner, to give us the inside track on the team that knocked Sparta out of the Europa League and “welcome” United on Thursday. Be safe folks!

It’s very simple. Your club won the Europa League Group Stage and you look forward to the 1st Knockout Round draw. You know your team have a chance to play against Manchester United, Gladbach and many other interesting teams.

That was a result of the draw in December last year when Sparta Prague fans found out their next opponent. It was a litle bit symbolic as Sparta beat FC Krasnodar last year in the same round of this competition but many things changed during the last twelve months and there was not the same fairytale like last year for Sparta.

Only one thing remained the same. It’s Rostov. Russia. Compare it to Manchester United. Attractivness level 0/100 vs. 100/100 for fans probably from all around the Europe.

And more importantly – very strong team to beat. I fully understand why José Mourinho said „A bad draw in every aspect.” after the draw.

Rostov, who are based approximately 1,000km south of Moscow, finished second in the Russian Premier League last season what is the club record.

For the first time in the club history they reached the main stage of one of European competitions as they beat Anderlecht and Ajax in the Champions League preliminary rounds last summer.

They finished third in the group and the biggest highlight of the group matches was a 3-2 win over Bayern Munich. And they beat Sparta Prague in the last 32 after 4-0 home win and a 1-1 draw in Prague.

As I wrote before Rostov is very strong team what they proved with their results and performances in the Champions League Group Stage.

Team itself is very well self-confidence and they are good physically prepared. They play very simple football as they are perfect in tackling and they make (very) fast counter-attack almost in every opportunity.

They know how to play with short and fast passes around the half line but they also know ho to speed up game with long pass for strikers Bukharov and Poloz.

Timofei Kalachev – despite he is 35 years old he was one of the best players in both matches against Sparta Prague. He is still very fast and strong in tackles at the right side of he pitch and he likes to go forward very often.

César Navas – another experienced defender who played for Real Madrid in youth categories and he spent some time in Málaga, Gimnastic and Racing Santander. He was also in Rubin Kazan but he plays for Rostov from 2015. He maybe is 37 years old but he is like rock in his central defender position. Almost 2 metres tall and strong defender, he could be dangerous during attacking set pieces.

Christian Noboa – central midfielder from Ecuador played for Emelc, Rubin Kazan, Dynamo Moscow and PAOK before he joined Rostov. He is great in one-on-one situations and he is able to distribute ball rightly to his team mates. He is very strong when he tries to find the ball from the second wave as he is able to shoot from distance.

Dmitry Poloz – If there was some player in both matches against Sparta Prague I enjoyed the most to watch it was Dmitry Poloz. This 25 years old winger is able to play on both sides and also as a striker. He was fast but also very calm on the ball. Everytime he had ball around his feets it was dangerous because he was able to start counter attack even if he was around the corner flag on his own half.

Aleksandr Bukharov – maybe some of you know this player from his time in Zenit St. Petersburg where he played from 2010 to 2014. He really benefits from the cooperation with Poloz and Erokhin as well. He is very strong in the air tackles but he is not clumsy tall striker who are able to heading. He is technically very good as well.

Sardar Azmoun – it was the biggest surprise for me that this young player was not in the starting XI against Sparta. But he scored goal after less than a minute on the pitch in the first leg. He is the type of player „Give met he ball and run forward as fast as you can.“ He has great record in the Iran national team as he scored 16 goals in 22 matches.

I was in Rostov in February this year and I was for the first time there. And, yes, hopefully it was also for the last time. I am used to hectic Prague but Rostov is in the TOP 3 of the ugliest towns where I was in my life.

Filth and stench everywhere. And I have to say I did not feel safe there despite I was in Sarajevo a couple of years ago and some of the locals attacked us around the hotel.

The nicest place I found in the town was the bridge over the river Don because when you reach the bridge starting point you left the town behind you also with the all the mess. Fresh air was there for a couple of minutes 

You can also see the new Rostov stadium at the other side of the bridge. The new stadium should be ready for the World Cup 2018.

The most embarrassing moment during my stay in Rostov was everytime I wanted to buy something or I wanted to ask about something. Everytime I asked „do you speak English please?“ the only answer was „Что?“ (What?) or „не понимаю“ (I do not understand).

But it was not only in some shops. I went to the The Bebop Burgers restaurant as I thought there will be no problem to speak English but there were eight employee of the restaurant and no one was able to speak to me. I have to use google translator in phone to ask about fork and spoon to eat my steak as locals eat it with gloves on their hands.

I recommend to all of you who travel to Rostov to be patient. I think it helped me when I stood before our hotel around midnight and two men got out of the car and they wanted to speak to me and my colleague. After he spoke Russian for a more than one minute I asked him if he is able to speak English. It was the end of his possible advantage because he was unable to say something meaningful.

As I wrote about the new stadium for the next year’s World Cup, this match will be played at Olimp-2. It’s very old stadium and despite some reconstructions I still can’t understand how they were able to play Champions League there. Same as the town stadium is also dirty and disgusting and with a very bad atmosphere.

Sorry, I know why they were able to play Champions League there. They’re from Russia and UEFA employee want any problems with them so there is alwys a room for some exception 

When Sparta played there it was -10 degrees and a lot of snow around the stadium. Despite they tried to clean it most of the people stood during the match on ice or in the snow. The bizarre moment was during the half-time break as all people, who stood or sat behind one goal, were able to go just only a couple of centimetres behind the goal net and they made selfies and they build a little snowman behind the goal.

In conclusion I just only want to wish all the Manchester United fans a safe trip to Rostov and be wary. 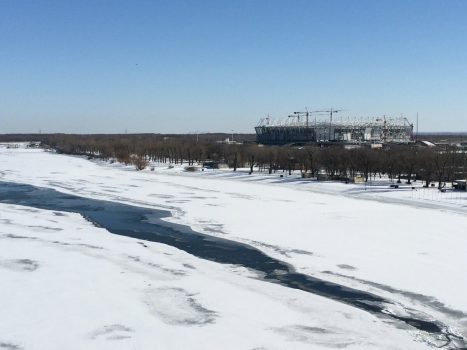 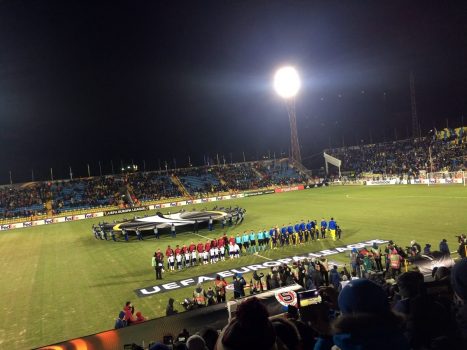 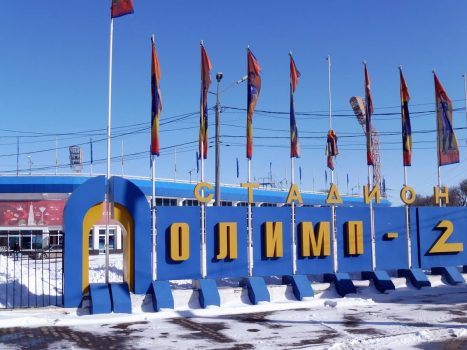 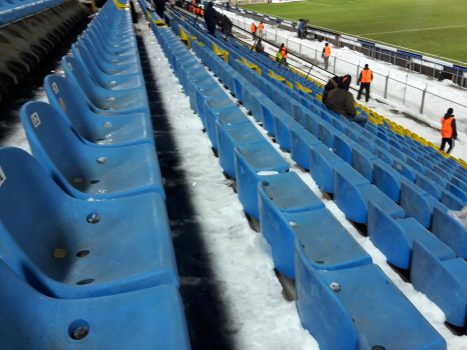 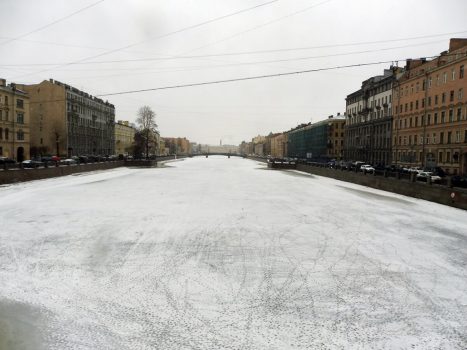